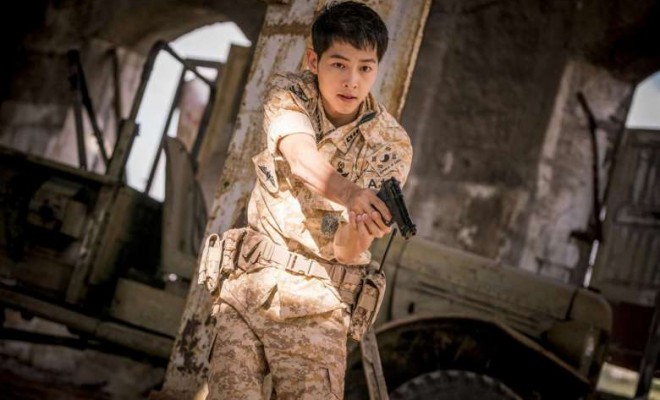 ‘Descendants Of The Sun’ Producer: Captain Yoo Didn’t Even Exist In Early Script

To all Captain Yoo Si Jin’s fans, this must be absolutely unthinkable.

In a surprising revelation of the highly successful drama ‘Descendants of the Sun’, it was revealed that actor Song Joong Ki was not the top candidate in the early script, and his character, Captain Yoo Si Jin, did not even exist. It was also the first time that the film company went into television production with a 13 billion won (US$11 million) pre-produced drama.

During an interview with JoongAng Ilbo, chief executive of New Entertainment World, Mr Kim Woo Taek, confessed, “Everyone said we were crazy.” He added, “But based on our confidence in the story’s content, we started planning.”

Mr Kim is not an unknown figure in the Korean entertainment industry. He has in fact produced many popular Korean movies, including ‘The Host’ and ‘The Chaser’. It was by chance that he got to know that a friend in the movie industry was making a TV show early last year. He decided to take it up as “it contains the universal values of humanity, love, and sacrifice”.

With the early script written by screenwriter Kim Won Suk, the creator of successful K-dramas, Kim Eun Sook, was then brought in to rework the story. She changed the love story by adding the romantic military characters, including Captain Yoo Si Jin.

Mr Kim Woo Taek told JoongAng Ilbo, “Kim Won Suk’s original screenplay tells the story of doctors who are active at disaster sites.” He continued, “After we became responsible for the production, screenwriter Kim Eun Sook did a rewrite and increased the love plot. She added military characters, overseas disasters and other elements to flesh out the story. When I read the script till episode four, it seemed good.”

On his company entering into the TV market for the first time, Mr Kim said: “We’re a newcomer to the TV market, and I wanted to enter it in a new way.”  He chose the most advantageous path – China. However for streaming in China, a drama must be produced 100 per cent in advance in order to go through the rigorous clearance. For instance, in episode one, there is a scene cut in the China version, when Captain Yoo has a politically sensitive scuffle with North Korean soldiers.

Next, came the selection for the role of Captain Yoo. In fact, there were other top actors during the selection process. However, when they knew that this show had to be pre-produced and filmed overseas in Greece, they hesitated.

Song Joong Ki was different from the rest. At that time, he was approaching his military discharge date. He positively responded: “Why wouldn’t I act in such a good drama?”

Although Song “has a relatively weak image” due to his boyish look for the manly character of Captain Yoo, the actor took on the role professionally. The executive producer was also convinced that it would be largely left to how viewers would imagine him in the role. “During the costume test, I saw Song Joong Ki in uniform and knew it would be a success”, he said.

Toward the end of the interview, Mr Kim revealed how he had refused to let go of any spoiler, even to his wife. “My wife thinks someone will die. She’s always asking me who will die, but I haven’t told her.”

Will ‘Descendants Of The Sun’ Filming Location Be Made As New Tourist Attraction?