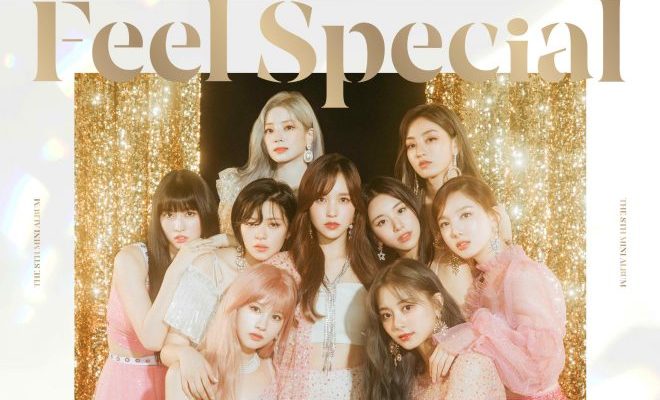 Everything You Need To Know About TWICE’s “Feel Special” Comeback 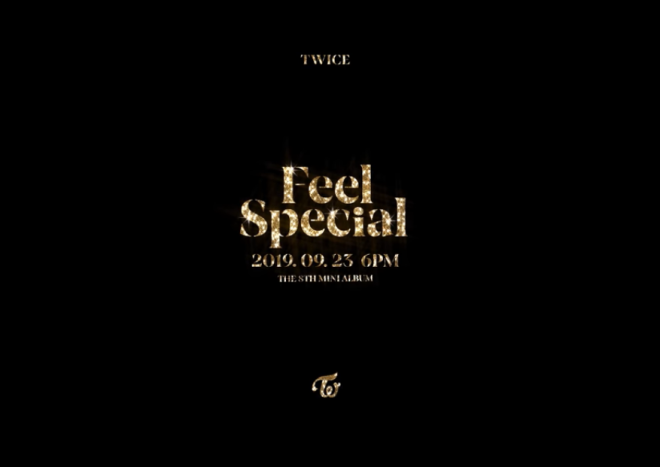 Feel Special will be the newest addition to TWICE’s discography, almost five months after the release of their successful seventh mini-album Fancy You.

To hype up ONCE even more, we have put together everything you need to know about TWICE’s eight mini-album Feel Special. From enchanting individual teasers, stunning group photos, and their amazing tracklist – this comeback will definitely prove their “Aisa’s girl group” status once again.

Shining, Shimmering, Splendid – this might be the best way to describe the look of the girls in their first set of solo shots. Highlighting their respective charming features and alluring auras, Nayeon, Jeongyeon, Momo, Sana, Jihyo, Mina, Dahyun, Chaeyoung, and Tzuyu looked exceptionally stunning and dazzling in their individual photos. 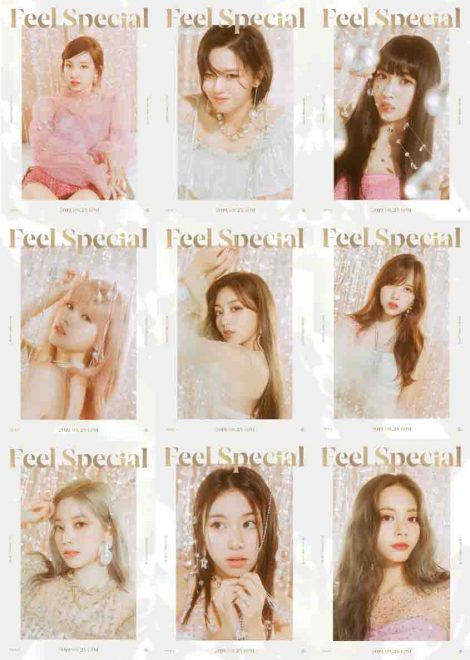 Featuring a more cinematic concept in the second set, the members are undeniably beautiful in their satin and sequin dresses. Nayeon, Momo, Jihyo, Mina, and Tzuyu donned vainglorious violet ensembles, while other members Jeongyeon, Sana, Dahyun, and Chaeyoung pulled off their respective beaming bluish outfits. 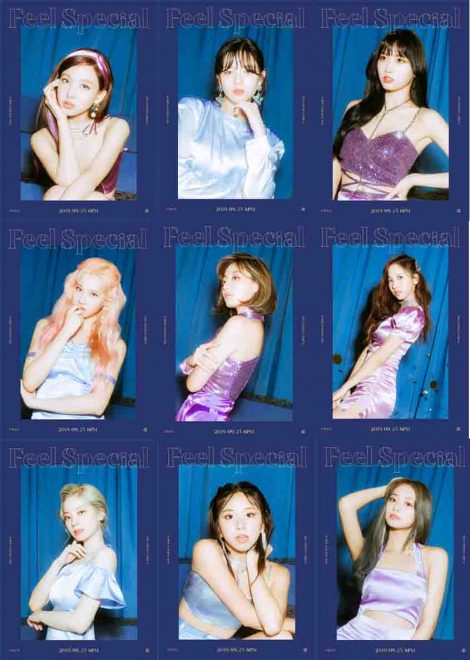 TWICE girls are goddesses of beauty and elegance. Yes, you read it right.

Unlike their signature cute concept, the beautiful idols are taking their game into the next level as they showed off their queen-like features. Looking like modern-day empresses, the girls went on to highlight their classy sides in the last set of individual photos. 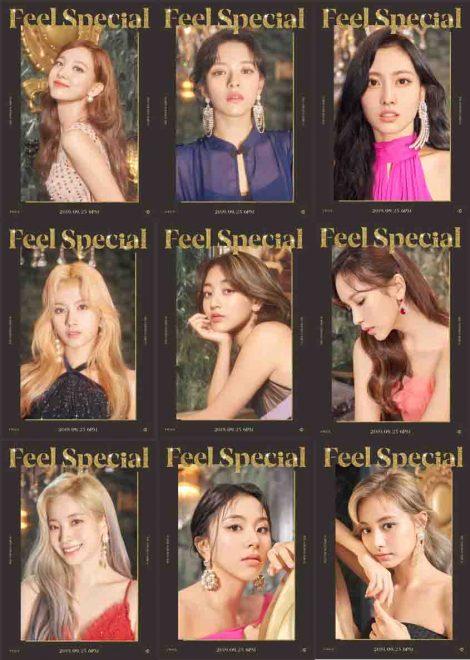 Aside from making fans excited with the girls’ individual teasers, JYP Entertainment has likewise gifted ONCEs with stunning group photos of TWICE.

Starting off with the “Shining, Shimmering, Splendid” concept, the K-Pop nonet looked even more alluring as they powered up their group shot with their superb synergy. The captivating photo also gained attention from fans as it seemingly evokes a touching meaning behind the shot. In particular, with Mina posing in the center, the other members appear like they are welcoming her warmly as they surround her with subtle hugs. 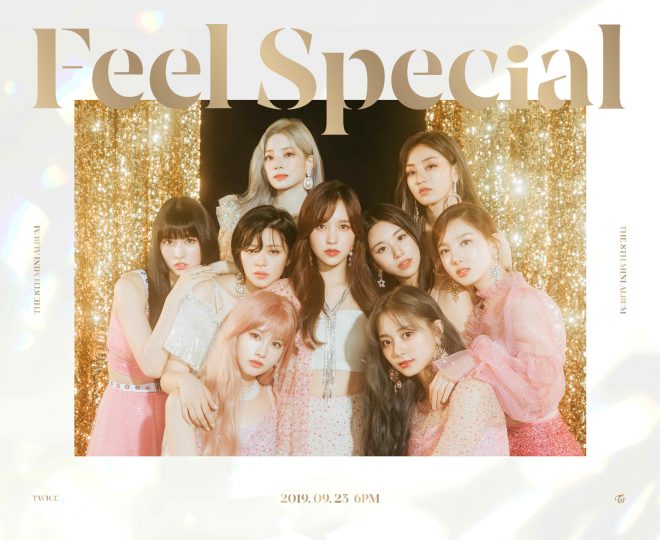 Wearing their purplish-blue outfits in the next shot, TWICE went on to give off a more casual yet classy vibe. Exuding overflowing charisma, the idols are surely ready to take over the music scene once again with their fiery stares. The photo even became stronger as the girl group’s beloved leader Jihyo posed like a fearless pillar in the middle. 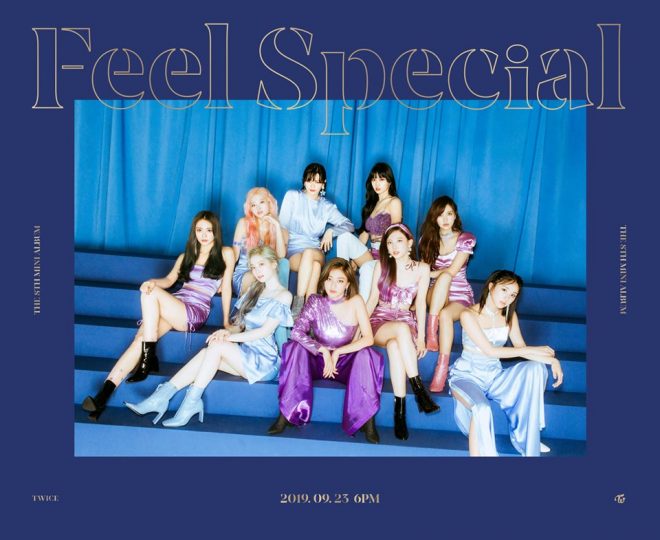 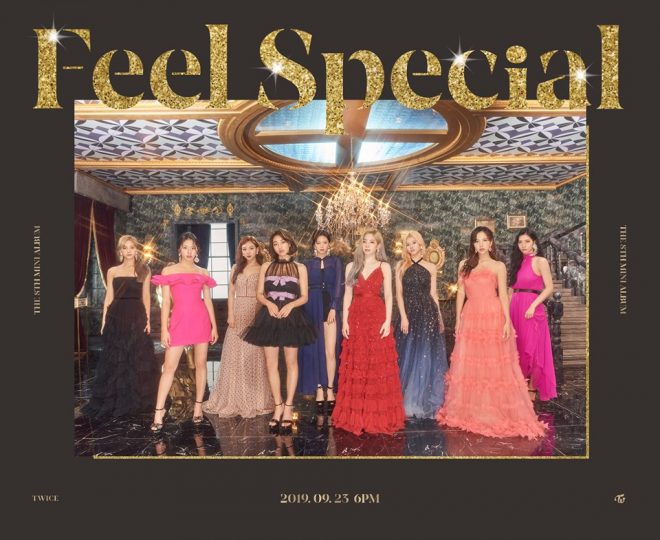 TWICE will be introducing seven new songs with their eight mini-album Feel Special.  Similar to their album name, the title track “Feel Special” is written and produced by their very own CEO Park Jinyoung. 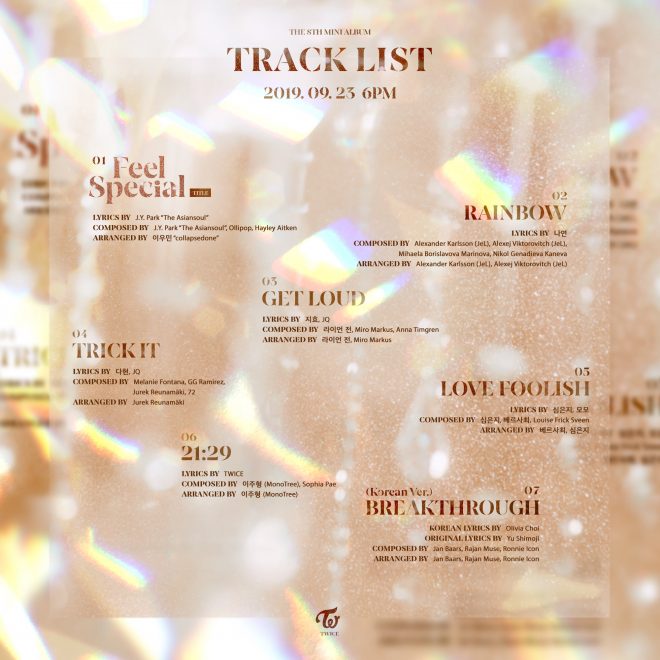 The girls will also be treating fans to songs such as “Rainbow”, “Get Loud”, “Trick It”, and “Love Foolish”. In addition, fans should look forward to hearing “21:29”, a song that the girls personally wrote, and the Korean version of their Japanese track “Breakthrough”.

To give ONCEs a little sneak peek about their latest title track, the girls unveiled a short and intriguing silhouette teaser of the music video on September 18.

Moreover, while waiting for TWICE’s nearing comeback, ONCEs can hype up themselves even more by listening to Feel Special‘s album highlight medley below:

READ: TWICE To Celebrate Comeback With An Appearance At “Idol Room”

FacebookTwitter
SubscribeGoogleWhatsappPinterestDiggRedditStumbleuponVkWeiboPocketTumblrMailMeneameOdnoklassniki
Related ItemsFeel SpecialTWICE
← Previous Story 7 Soft GOT7 Songs That Will Leave Your Heart In A Love Loop
Next Story → Your Guide To Artist Lineup, Fan Perks & Activities At “KAMP Singapore”