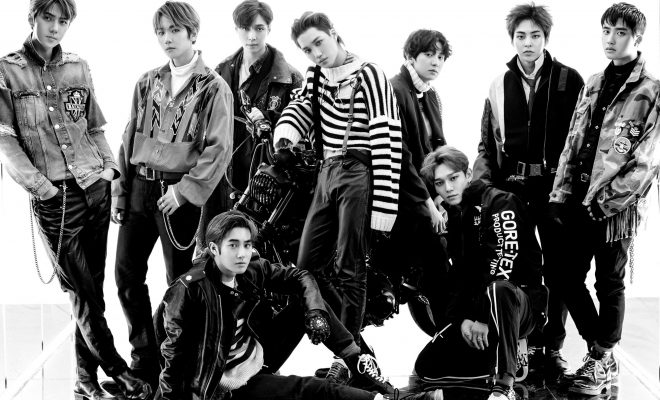 EXO has just reached another milestone as it celebrates seven years in the entertainment industry on April 8. Together with their beloved EXO-L, Suho, Xiumin, Lay, Baekhyun, Chen, Chanyeol, D.O., Kai, and Sehun commemorated their record-breaking and history-making career with sweet messages, special song recommendations, and a beautiful photo book.

Songs for You: 9 Songs EXO Wants To Dedicate To Fans

The members shared with their beloved fans song recommendations from the boy group’s discography, along with thoughtful reasons behind their choices. 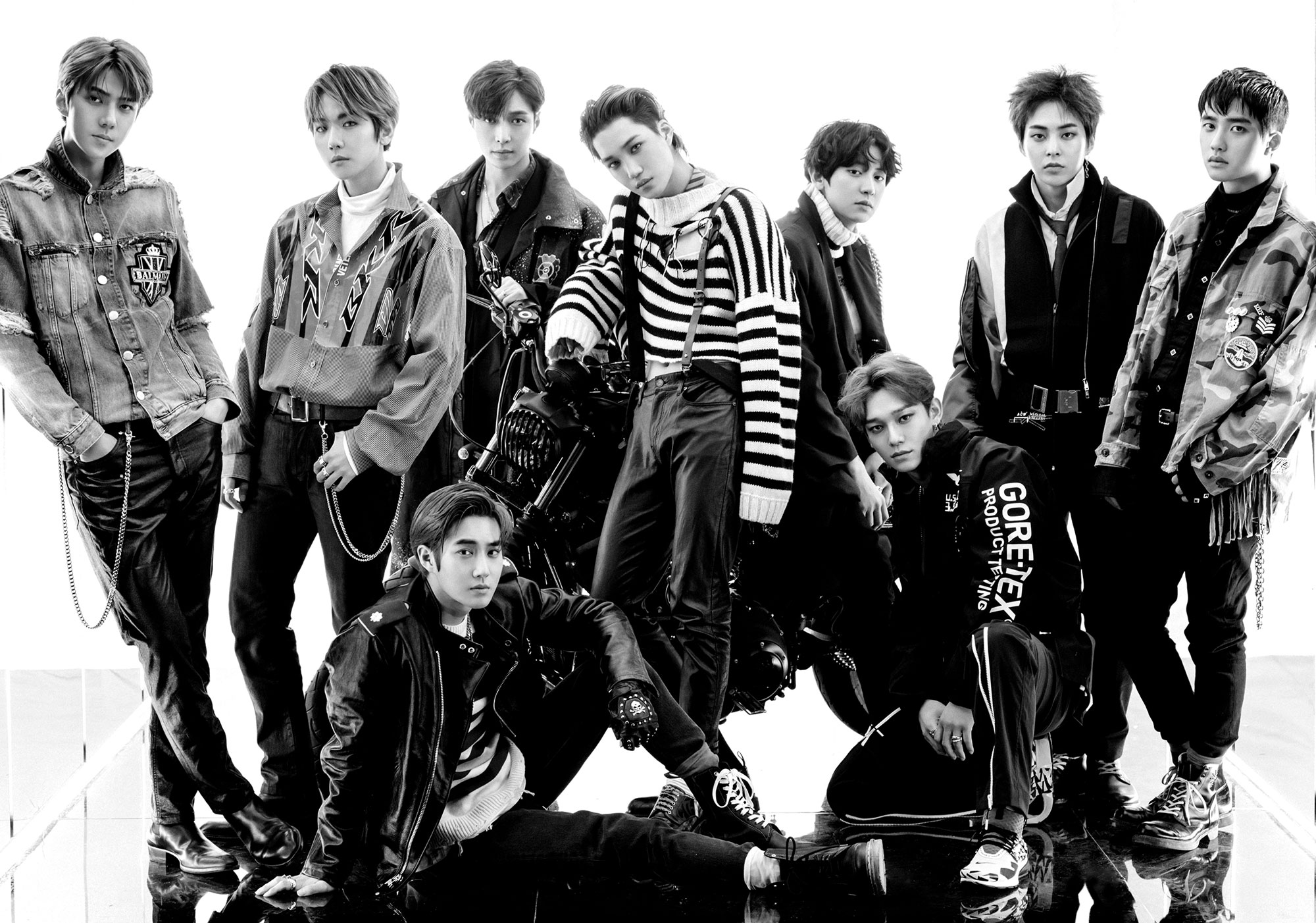 The members for Don’t Mess Up My Tempo, the boy group’s fifth full album. The album also made EXO a quintuple million seller. (Photo from SM Entertainment)

Eldest member Xiumin, who shared bits of his daily life through Heart4U, picked “Don’t Go” from the repackaged version of their best-selling studio album XOXO. According to him, the song’s soft and nostalgic melody reminds him of the fans. Moreover, “Don’t Go” is loved by many EXO-L.

Read: 10 Things We Have Learned About Xiumin In First Episode Of “Heart4U”

Meanwhile, leader Suho went for “Beautiful”, a track from the repackaged version of the boy group’s chart-topping second studio album Exodus. The singer then explained that the word “beautiful” best describes the fans.

Also, the leader of EXO wrote a heartfelt message to fans. He updated them on his activities and expressed his gratitude to them. He also acknowledged the hard work of EXO-L. Lastly, he promised to “see each other for a long time” and relayed his love to fans with an “I love you.”

Lay, for his part, chose “Call Me Baby”, the title track of Exodus. For him, the song showed the boys’ mature sides. Additionally, through the comeback, they showcased new sides of themselves. He also praised the coolness of the song and music video.

On the other hand, Baekhyun picked EXO’s most recent release “Love Shot”. According to him, the track shows the cute side of EXO-L as they hold their chest, as if clutching their hearts, to express the effect of the members’ dance to them. He also thanked the fans for patiently waiting for their return.

“It made me think that I want to continue performing happily like this,” he said. He then promised to show diverse stages that will make fans hold their hearts.

Chen, who recently came out with his chart-topping solo album April, And A Flower, chose “Heaven”. He said the song from EXO’s third studio album Ex’Act fits fans the most as they make the boys happy with their love and endless support.

Read: EXO’s Chen Soars High On Domestic And International Charts With “April, And A Flower” And “Beautiful Goodbye”

For his pick, Chanyeol looked back on the boys’ pre-debut as he recommended “What is Love”, a track released prior to the boys’ official debut and included in their first mini album Mama. He considers the song, whose Korean version was performed by D.O. and Baekhyun, as the most memorable for its first song that the fans got to hear from them.

Like Chanyeol, D.O. brought in nostalgia with his song recommendation — “Mama”, the debut song of the boy group. The singer-actor explained that he opted for the said track as it officially introduced EXO to people.

Meanwhile, Kai picked “Lucky” from the repackaged version of XOXO because it expresses how lucky he is to have met EXO-L.

Completing the song recommendations, Sehun opted for “Peter Pan”. According to him, he picked the song because he wants to go back to that time and reminisces the past.

Aside from their special song recommendations, EXO also treated fans with an exciting news in time for the seventh anniversary. SM Entertainment announced the upcoming release of a photo book which features the vacation of the members (sans Lay) in Hawaii.

Titled PRESENT ;gift, the photo book is now available for pre-ordering on various online and offline sites. It will come out on April 30.

To EXO, From EXO-L: Worldwide Trends And Donation Drives For #7YearsWithEXO

They filled the hashtags with their messages of pride, support, gratitude, and love. They also took the chance to look back on the beginnings and many achievements of the boy group throughout the past seven years.

My youth days will never be complete without them. #7YearsWithEXO pic.twitter.com/BWxaGORR86

To the group i love the most to the group that inspired me a lot to the group that changed my boring life i'm proud to say that it is EXO.
WE ARE ONE! WE ARE EXO! SARANGHAJA!!! Fighting!#EXO7thAnniversary#7ogetherWithEXO#7YearsWithEXO pic.twitter.com/uFZijM2Jwi

Thank you for being my inspiration, source of happiness, my sweetest escape, my stress reliever, my everything ♥️ HAPPY 7 YEARS OF UPS AND DOWNS, HAPPINESS AND HEARTACHES BUT STILL WE ARE ONE! Let's be together till the end. pic.twitter.com/6SjaSKw7bA

Started as 12 and now, still fighting as 9. Congratulations EXO on your 7 years! To Luhan, Kris and Tao congrats too guys! This is your 7 years in the industry. No matter what people say its still 12 in my heart. I love you, always and forever#7YearsWithEXO #7ogetherWithEXO pic.twitter.com/rW1YAJR9KT

Additionally, in celebration of their favorite boys’ seventh anniversary, fans shared the happiness of another milestone by setting up fan projects and organizing donation drives for the less fortunate.

In light of the massive wildfire that blazed areas in Gangwon Province, EXO-L donated 17.5 million won to those affected.

In related news, EXO earned its first nomination on Billboard Music Awards in this year’s award ceremony. The boys were nominated under the Top Social Artist category where they joined BTS, GOT7, Ariana Grande, and Louis Tomlinson.

Hellokpop, as an independent Korean entertainment news website (without influence from any agency or corporation), we need your support! If you have enjoyed our work, consider to support us with a one-time or recurring donation from as low as US$5 to keep our site going! Donate securely below via Stripe, Paypal, Apple Pay or Google Wallet.
FacebookTwitter
SubscribeGoogleWhatsappPinterestDiggRedditStumbleuponVkWeiboPocketTumblrMailMeneameOdnoklassniki
Related ItemsEXO
← Previous Story K-News Weekly Headlines: K-Celebrities Aid Gangwon Wildfire, Jung Yong Hwa’s “Melody”, Fan Meetings & More!
Next Story → BTS Drops Extremely Adorable And Heartwarming Behind-The-Scenes Video Of Their Grammys Experience