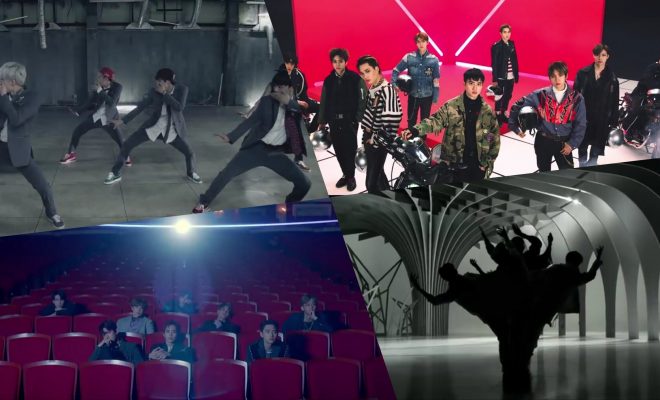 True to their name as one of the biggest and most popular boy groups of the generation, EXO impresses with record-breaking album sales and history-making achievements both as a group and as individuals.

Although it has been months since the boys’ last release, they continue to make headlines and sets new milestones — with the “Love Shot” music video hitting 100 million views being the latest. But the title track of their fifth repackaged album Love Shot is not the sole EXO MV which surpassed that mark. In fact, the boy group filed ten music videos under its name with more than 100 million views.

Check out the complete list and celebrate each milestone by re-watching the MVs.

EXO-K’s “Overdose” is the first MV of the boy group to join the 100-million club on YouTube. A day short of its second anniversary, the music video achieved the milestone on May 5, 2016 after having been released on May 6, 2014.

Aside from being the first MV to record the impressive view count, “Overdose” also marked the final release of the boy group with its complete original lineup. The same month of its release, Kris filed a lawsuit against SM Entertainment. Lu Han followed in October of that year.

“Overdose” served as the title track of EXO’s second extended play of the same title. The EP was released in Korean and Chinese versions, making it the final release of the boy group as EXO-K and EXO-M.

The title track of the album Growl, the repackaged version of the boy group’s first studio album XOXO, is considered the boys’ best-selling track. Moreover, XOXO and its repackaged made EXO a million-seller. It is also the best-selling album of 2013.

2016 was the year EXO collected 100 million views as “Call Me Baby” surpassed the mark in the same year. The lead single of the boys’ second studio album Exodus secured more than 100 million views on August 22, 2016.

Aside from the impressive view count of the MV, “Call Me Baby” also gave the boy group 18 music show trophies. Meanwhile, Exodus marked the boys’ double million seller after the 2013 hit XOXO. It also saw Tao’s final participation in the boy group’s releases after seeking contract termination from SM Entertainment in 2015.

Yes, by this time, you can definitely call EXO monsters in achieving feats after feats. “Monster” is the fourth music video of the boy group to hit the 100 million mark. With this achievement, the boys joined their seniors Psy, BIGBANG, and Girls’ Generation as artists with at least four MVs, with such impressive views during that time.

Named as the only K-Pop song in Fuse’s 20 Best Songs of 2016, “Monster” led the boy group’s third studio album Ex’Act. It also gave the boys their first number one on Billboard’s World Digital Songs chart.

As of 5 p.m. KST of March 5, “Monster” recorded more than 255 million views. The MV is also the most-watched music video of EXO as of press time.

We know you will like this, EXO-L! Only a few months since its release, “Ko Ko Bop” surpassed 100 million views on December 11, 2017, making it the sixth EXO MV to do so.

Other than the YouTube views, the title track of The War, the album which gave the boy group its quadruple million seller status, was met with positive reception when it came out in July 2017. It stayed on top of Gaon weekly singles chart for four consecutive weeks.

Through it, EXO became the first group to top the Gaon Monthly Digital and BGM charts in 2017 and the fifth boy group since 2012 to do so.

In October 2018, EXO added “Love Me Right” to its list of music videos with over 100 million views.

The song, whose MV marked the first music video of the boy group as a nine-member group, fronted the repackaged version of the boys’ second studio album Exodus.

Xiumin, Suho, Lay, Baekhyun, Chanyeol, Chen, D.O, Kai, and Sehun really hit the lotto with the lead track of the repackaged version of their Ex’Act album.

“Lotto” became the eighth music video of the boy group to surpass the 100-million mark. Additionally, it recorded another number one for the boys on Billboard’s World Digital Songs chart.

We can’t believe~ Kidding! We are 100 percent sure that it was only a matter of time before “Tempo” joined the growing club. And we are not wrong.

Less than four months following its release, “Tempo” surpassed 100 million views, making it the ninth MV of the boy group to amass such huge number of views.

The music video treated EXO-L with a highly anticipated OT9 MV. Additionally, the fifth full album Don’t Mess Up My Tempo, which was fronted by “Tempo”, saw EXO become the first boy group, among those who debuted after 2000, to sell more than ten million albums.

Finally, “Love Shot” completes the list of the boys’ music videos with more than 100 million views.

The newest addition to the club, the boy group’s latest MV also marked the fastest one to accumulate such gigantic number of views. “Love Shot” surpassed the mark in a little over two months after its was uploaded.