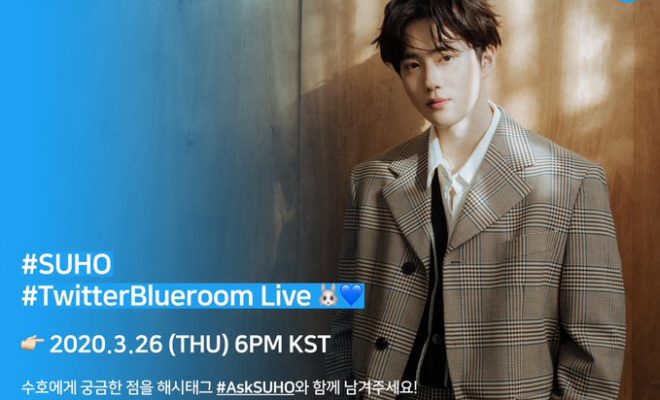 EXO’s Suho caught up with his fans recently through a fun chat in Twitter Blueroom!

In preparation for his nearing solo debut, EXO’s Suho sat down for a question-and-answer session with Twitter Blueroom to meet his fans on March 26! 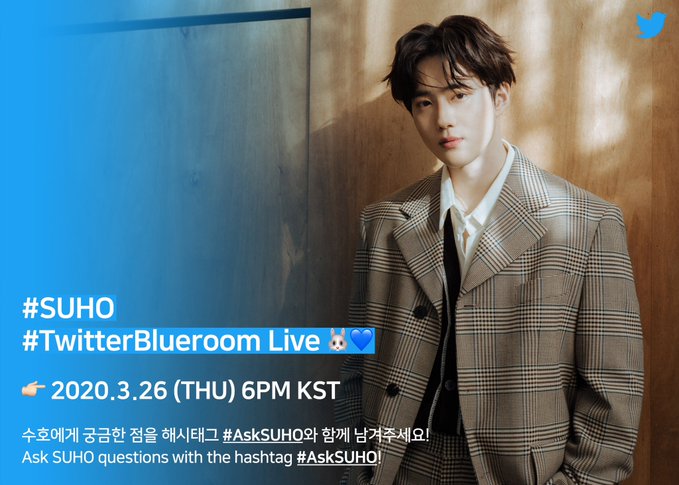 The EXO leader connected with his fans virtually through a 54-minute-long live session with Twitter Blueroom held ahead of his upcoming solo debut with the mini-album Self-Portrait.

Headlined by the song “Let’s Love” which throws an ode to EXO’s slogan which Suho made himself, the mini-album is scheduled to be released on March 30 at 6 PM KST.

Opening the special broadcast, the EXO leader welcomed his fans and pointed out how the venue is occupied by himself alone—for the very first time.

“Whenever I go on live broadcast [like this], my friends—my members—are always beside me and I don’t feel lonely. However, they’re not here today and I feel kind of lonely,” he delivered his honest thoughts before marking the official start of his question-and-answer session.

“There’s no reaction when I do this intro,” the singer adorably remarked, noting how there is no one around to hype him up live because it’s a solo promotion. “Usually Baekhyun will be the most mischievous one, playing around and being loud,” he added.

Among the activities he prepared for the broadcast is a special unboxing segment where he unveiled his mini-album’s physical package for the first time, which consists of an album cover, booklet, postcards, as well as regular and special photo cards.

Before browsing its photobook, Suho shared that he really likes the album covers, and that even his parents commented on how pretty his album cover art was.

He also shared that his favourite photo in Archive #1 was the one taken upside down where he did a difficult pose. Additionally, the singer noted how artsy Archive #2 was thanks to the many photos in it which looked like paintings.

The EXO member also revealed that the photos which showed him standing in a desert was taken in Dubai. “Not Incheon,” he joked, noting that it was hard to do the photoshoot because of the sand.

During the Q&A session, Suho confessed that holding his solo debut is not easy because it is the first time that he is doing everything on his own without the other EXO members.

Moreover, he mentioned that he has a lot to consider with the concept and everything else. Nonetheless, the well-loved EXO leader shared that he had fun while preparing for the release of Self-Portrait.

Sharing the inspiration for his album, the EXO leader excitedly said “Van Gogh! When you look at the actual painting, the mood is quite different from when you look at its pictures in a book.”

He also quipped about the album’s colour, “you can’t tell what colour is it right? It’s “Suho colour”!”

When asked which song from Self-Portrait he is dedicating to EXO-Ls, Suho answered, “Officially it’s “Made in You”, but the entire album is for EXO-Ls. I drew my self-portrait and inside me, EXO-Ls are always there.”

The singer also featured the winning illustrations from the drawing contest held for his solo debut using the hashtag #천하제일수호그림대회 (Drawing Contest for the World’s Best, Suho) earlier this month.

Fans submitted illustrations of Suho on Twitter through posts with the hashtags #SUHO, #Self_Portrait, and #천하제일수호그림대회. The contest received overwhelming submissions from fans all around the world, propelling the hashtag #천하제일수호그림대회 to trend as it gathered more than 100,000 mentions between March 12 to 20 (data as of March 24).

Showing the EXO leader’s power as well, the hashtag #AskSUHO also trended number one worldwide on Twitter after he Tweeted about his #TwitterBlueroom session.

Hellokpop, as an independent Korean entertainment news website (without influence from any agency or corporation), we need your support! If you have enjoyed our work, consider to support us with a one-time or recurring donation from as low as US$5 to keep our site going! Donate securely below via Stripe, Paypal, Apple Pay or Google Wallet.
FacebookTwitter
SubscribeGoogleWhatsappPinterestDiggRedditStumbleuponVkWeiboPocketTumblrMailMeneameOdnoklassniki
Related ItemsEXOSuhoTwitter Blueroom
← Previous Story MAMAMOO’S Moonbyul Took On A Fierce Challenge In Her Pictorial For Allure Korea’s April 2020 Issue
Next Story → Kang Daniel Records Highest Sales For Albums Released In 2020 By Male Soloists On Hanteo With “CYAN”