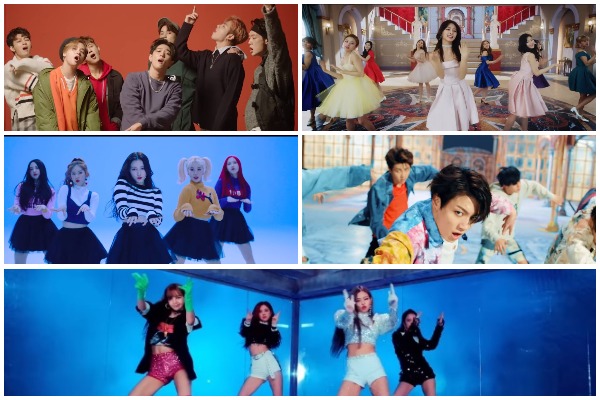 But it is a routine that we gladly recommend. After all, K-pop videos on YouTube take visually appealing concepts, layered with addictive rhythms that ca brighten up your mood at any given day.

Korean pop culture has positioned itself as a major player in global entertainment. Its globally acknowledged prominence is proven by well-received viewership in various video streaming platforms such as YouTube.

The high-quality music videos and bop tunes catch easily the attention of music lovers anywhere in the world.

We listed five of the most well-liked YouTube music videos from today’s trendy K-pop artists. See for yourself its therapeutic magic.

The smooth and refreshing instrumentals combined with iKON’s trademark subtle hip-hop sound, makes this breakup song easy on the ears. “Love Scenario” is such a huge hit that it already has over 178 million views, and counting, on YouTube.

Additionally, PH iKONics can watch their faves live as they perform in Manila on November 11 as part of the group’s iKON 2018 Continue Tour.

This delightful music video from one of Asia’s most sought-after girl groups has been racking up views.

“What is Love?” has more than 193 million YouTube streams to date. In addition to Twice’s charm, the montage of popular movie references such as The Princess Diaries, Romeo and Juliet, Love Letter, and La La Land is also a nice treat for the girl group’s supporters as well as movie fans.

Who hasn’t heard of this song? The views on YouTube is already more than 253 million, further proof that a lot of people know this Momoland hit track.

The catchy beat and viral dance moves created a huge buzz. It pushed ardent K-Pop fans across all demographics were inspired to create a lot of dance challenge videos which have gone viral.

There is no question that BTS has taken K-Pop into new heights. From sold out local and global concerts to speaking in front of world leaders in the United Nations, this boy group has been proving how far they could go.

Even though “Fake Love” has already amassed a whopping 328 million views to date, fans still continue to stream. That number is sure to grow as a result.

READ: BTS To Kick Off #LikeMAMA Campaign With Stories Of Challenge, Passion, And Dream

YG Entertainment’s prized girl group currently holds the record for the second most watched Korean music video within 24 hours of release on YouTube. “Ddu-Du Ddu-Du”, a single from their mini-album Square Up, has 382 million views and the numbers is expected to go up as fans keep on watching.

Fans in the Philippines can satisfy their K-Pop cravings by streaming their favorite videos with Smart LTE, the country’s fastest LTE network as recognized by industry experts Ookla and OpenSignal.

Smart, Sun and TNT prepaid subscribers can register to select prepaid promos until October 31, 2018, in order to enjoy up to one hour of Free YouTube Every Day. Furthermore, this is also open to Smart and Sun postpaid plan holders.