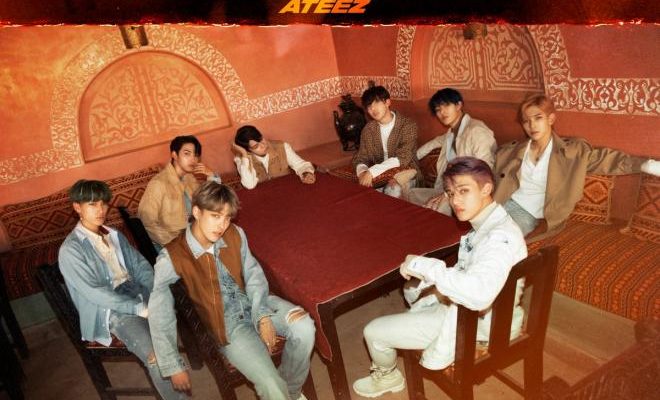 On Hellokpop Playlist: ATEEZ From Then Until Now: Take A Nostalgic Journey Of Their Evolving Music

As ATEEZ approaches their second anniversary, take a stroll down memory lane with a deep dive into their discography up until now and re-discover the magic of their journey!

ATEEZ celebrates their second anniversary in only a few days! Whether you’re a seasoned ATINY or just joining their journey now, take a trip into the past with a nostalgic listen to some of their iconic songs. From legendary title tracks, fan-dedicated songs, to stunning b-sides, this curated playlist will take ATINYs on a brief reminiscent path of their growth, or leave newer listeners yearning for more.

As one of their debut title tracks, “Treasure” marked both the beginning of ATEEZ’s literal journey within the K-pop industry, but also their narrative journey as pirates in search of treasure. The grand track featured an equally stunning music video shot in Morocco that impressed viewers with its scale.

Moreover, the song is a true testament to their growth as well as their determination. In self-prophetic lyrics, member Mingi raps, “After two years we’ll dominate the mass comm/ We’ll take all the spotlight”.

Now, approaching the group’s official two year anniversary with countless achievements under their belt, these words ring truer than ever.

After their spectacular debut, ATEEZ raised brows with their second title track, “Say My Name”. The song stands out as a defiant announcement of self-expression. Singing lyrics like, “Don’t try to stop me” and “My name is A to the Z”, ATEEZ trace their forward-moving trajectory and declare themselves to all listeners as here, and here to stay.

In a move full of confidence and conviction, rare for rookies just easing into the industry, ATEEZ won over the hearts of many fans. Their fandom, ATINY, grew exponentially from this point forward and show no signs of stopping.

ATEEZ released their first summer comeback in a glorious fashion. While there was much debate during a fan-hosted vote between “Wave” and “Illusion” for the title song of the comeback, “Wave” emerged as the winner.

The tropical track became a summer anthem for listeners and nabbed the group their first music broadcast win. As such, the song holds special meaning for fans as a representation of the group’s growth and rising success.

Composed, arranged, and written by leader Hongjoong as well as lyrical additions by member Mingi, “Aurora” easily became a fan-favorite track. The soothing b-side from the album TREASURE EP.3: One To All is a sweetly penned dedication from ATEEZ to ATINY.

The song is meant to express what fans are for ATEEZ. Released a not even one year after their debut, the song is a true testament to the strong bond ATEEZ formed with their fans.

One of their grittier tracks, “WIN” portrays the distinct stage and musical intensity only ATEEZ can serve. In parallel with their pirate concept, “WIN” is reminiscent of sea shanty music. However, with lyrics such as “Our ship sails only one way/ Hey we are gonna win”, the song not only tells the tale of their narrative pirate worldview but also of their journey to success in real life.

As the group consistently dominates charts, sells out tours, and wins top industry awards, ATEEZ rightfully sings about what they do best with their loyal fandom by their sides–win.

“THANK U” is an emotive track that tugs on every listener’s heartstrings. As its name suggests, the song at its core is one of gratitude. The members touch on difficult times and thank those who have been on their sides through it all.

While “Thank U” is a nod to their loyal fandom, ATINY, leader Hongjoong penned the track with his fellow members in mind. This song is just as much a thank you to their devoted fans as it is for one another, making every performance an emotional one.

“Answer” is equal parts ominous as it is grand. Revisiting their pirate worldview, the song provides fans with more information on ATEEZ’s journey in search of their treasure. Moreover, its music video finally reveals ATEEZ with their doppelganger counterparts in one room, intriguing fans with new implications for the group’s storyline. Additionally, as another anthem-like song, “Answer”‘s empowering lyrics makes any listener feel revitalized and ready to tackle any challenges.

An ATEEZ playlist would not be complete without “Star 1117”. The fan-dedicated track has a special spot in both ATINY and ATEEZ’s hearts. The members croon to listeners, equating their beloved fans to stars who always make them shine and watch out for them. In one of ATEEZ’s rarer ballads, the members take time to soulfully express their sincere gratitude to their supporters.

ATEEZ turned another cornerstone in their careers with the song “Inception”. Their first love song since debuting, “INCEPTION” is romantic and dreamy, making it a stand-out track amongst their discography.

Furthermore, the song captivates fans with its references to time, further elaborating on ATEEZ’s narrative concept increasingly integrated with time-travel and alternate dimensions. The group’s experimentation with more a more modern-inspired dance style and water scenes make the music video a cinematic experience.

Perhaps one of the songs that best describes ATEEZ’s current state, “FEVER” is a celebration of youth. Acknowledging the pain and stress that youth endure, ATEEZ encourages listeners to “let it go” and enjoy the present moment.

Though youth may not know the result of their futures, the song is an inspiring message to enjoy the journey while it lasts, to live harder and live younger.

Arguably ATEEZ’s most nostalgic song of all, “From” was created entirely when ATEEZ were still pre-debut idols. The endearing track encapsulates their passion and excitement for the beginning of their journey. Their talent was evident from the very start, and their growth since then continues to skyrocket.

ATEEZ also performed a special rendition of the pre-debut track, incorporating various choreographies from their songs since debut for fans to tenderly reminisce their past.

ATINYs can gear up for ATEEZ’s second-anniversary concert on October 24, celebrating the milestone.  Tickets for “ATEEZ 2ND ANNIVERSARY ONLINE CONCERT: Port of Call” are available exclusively on MyMusicTaste.

Additionally, readers can check out our special giveaway for a live ticket to the event, hosted in collaboration with MyMusicTaste!