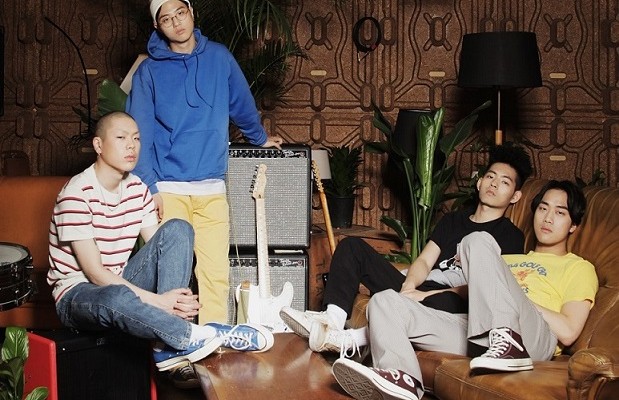 Four-man indie rock band Hyukoh, consisting of members Hyuk Oh (lead vocals, guitar), Dong Geon IM (Bass), In Woo Lee (Drums) and Hyun Jae Lim (Guitar), is causing a sensation in the Korean indie scene, thanks to an unique blend of alluring vocals and resonant music. Any attempt to assign this band into a particular genre would result in something like “alternative neo-soul indie rock”, but what characterises Hyukoh’s sound is a rather new brand of music altogether, strange and yet somehow familiar. With all members born in the same year 1993, this young band has infused everything from music and videos, to performances and even fashion. After the release of debut EP 20 in 2014, Hyukoh rapidly developed a cult following by word of mouth alone. Since then, they have opened for major international bands, such as Mac DeMarco and Erlend Ø ye, while selling out a string of concert venues and festivals. They are currently working flat-out on their debut full album, due for release with this year.

It’s surely no exaggeration to say that these four 23-year-olds’ cover art, which cries out to be posted on Instagram, their music videos, their free style, reminiscent of something between 1990s and skateboarder looks, and above all their lyrics, which speak straight to today’s youth, have made them the band for the new generation.

This is a band that knows how produce a sophisticated sound that belies its lack of experience, while frankly displaying the naivety that comes with its youth at the same time.

Hyukoh’s members, with its flower-picking vocalist, dog-loving guitarist and drummer, and former lamb kebab aficionado bassist, say they plan to keep on making music together for a long time.

Hyukoh is living proof of the youth of groundless existence, neither positive nor negative, itself.

Hyukoh-esque’ has come to define a certain kind of lazy, listless mood, gaining the band a considerable following in a very short time.

2015 Opening act for How to Dress Well (Seoul KOR)

Brought to you by Duruduru Artist Management Company