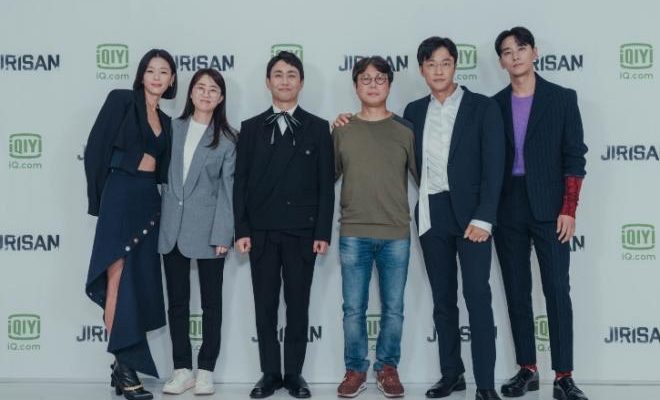 iQiyi Original K-series Jirisan took center stage internationally with its global press conference that featured its lead stars and creative team. Opening with a highlight video of Jirisan, the sneak preview showcased Jirisan peak in its glory through the four seasons.

Jun, Ju and their fellow actors star as national park rangers who face typhoons, fires, floods and untold dangers without fear in their search and rescue missions. Lying in wait are not only mysteries and suspense, but also heartwarming stories that viewers can look forward to.

Jirisan follows the team of national park rangers who are responsible for the search and rescue on Jirisan. Experienced ranger (played by Gianna Jun) and rookie ranger (played by Ju Ji-hoon) are set to unravel the secrets of the peak. The iQiyi Original K-series will exclusively simulcast with Korea on October 23rd on iQiyi International app or iQ.com worldwide.

Jirisan National Park’s star ranger Gianna Jun and rookie ranger Ju Ji-hoon are in a ‘senior-junior’ relationship. Spending long hours together led to amazing transformations in their relationship. Speaking of the time together and chemistry in their first-ever collaboration, Jun said, “It was a very good partnership, we were at ease.” Ju joked, “I’ve been a fan of Gianna Jun ‘since young’. Her charm has left me speechless and has always been a role model for me. In our collaboration, she was always trying to feed me, so I am very thankful to her.”

In addition to the on-screen chemistry between the male and female leads, Jun, Oh Jung-se and Cho Han-cheul are also teammates of the Haidong Branch rangers. The moments of hilarity and bickering among the trio in the series are not to be missed. Co-star Sung Dong-il mentioned in a previous interview that Oh Jung-se can bring on the laughs while Jun was guilty of some ‘NG’ scenes.

Gianna shared, “Actually he just looks funny. There are many scenes that we had to shoot together and they were all serious ones, but he just made us laugh. And before we burst out laughing the director would shout ‘Cut!’.” Oh Jung-se added when Jun was so into her character, “There was once Gianna Jun wanted to hit my head, but she burst into laughter before she could do it. After laughing though, she still did hit my head.” In embarrassment, Jun replied, “I wanted to be serious then, but could not stop myself from laughing, I am really sorry.”

Cho Han-cheul joked, “The three of us in the series are of the same age, I’m very happy with that.” Jun jumped in to clarify, “After reading the script, I told writer Kim that I’m innocent, and asked why is my character as old as the uncles and that I could not convince myself.” Cho quipped, “What’s so difficult, what we see on screen is very convincing!” The three bantered at the press conference just as they would on screen.

From her elegant, goddess-like image in previous romance comedies, Gianna Jun showcases a new side of strength and skill in Jirisan. Speaking of her role, Jun said  “Actually, I didn’t accept the role because I wished to play a strong woman, females today are stronger in character. I never thought I would play a park ranger, to me this is a brand new experience.” Gianna Jun also felt that the filming process was not too tough, “I didn’t feel exceptionally tired or cold, I was very happy throughout the filming process.  As I prepared well in mountaineering gear, there were not many difficulties.” In fact, Jun feels that the production process has improved her physical health.

Ju Ji-hoon plays rookie ranger Kang Hyun-jo who seems to bring the element of mystery into the series. He shared his thoughts on his character and revealed how he went about bringing it to life. He felt every actor has different charms. Prior to production, he would discuss with writer Kim, listen to her analysis of his role. He revealed that he enjoyed climbing from a young age and expressed enthusiasm to climb Jirisan in the future. Ju shared that it took a lot of energy to shoot this series, it was tough, especially when ascending the peak and his legs had to hold still. The shoot was about 3 – 4 times more demanding than shooting on even ground, he quipped, “That’s why I run to keep fit.”

Oh Jung Se has played many memorable characters in various drama series including Stove League. Having starred in many successful dramas, he is enjoying great popularity. Oh shared what made Jirisan his latest project and the challenges he encountered through production, he said, “Many are anticipating Jirisan, one can feel its charm from the show title alone, especially with writer Kim, director Lee Eung-bok and photography director’s Choi Sang-mook behind it, I had no reason not to accept the role.”

Cho Han-cheul has played comedic roles that brightened up many shows. In Jirisan, not only is he teammates with Jun, Ju as the Haidong Branch park rangers, he will once again inject humour to lighten up Jirisan. Sharing his shoot experience, Cho talked about the joys and challenges of filming in nature and revealed that when he was 20, he climbed the mountain in an attempt to quit smoking. He has even ascended to the peak twice since. Laughing about his own age, Cho said that the production took a toll on him physically.

Don’t miss the global premiere of Jirisan on iQiyi on October 23 SGT at 8PM!

All photos and videos courtesy of iQiyi