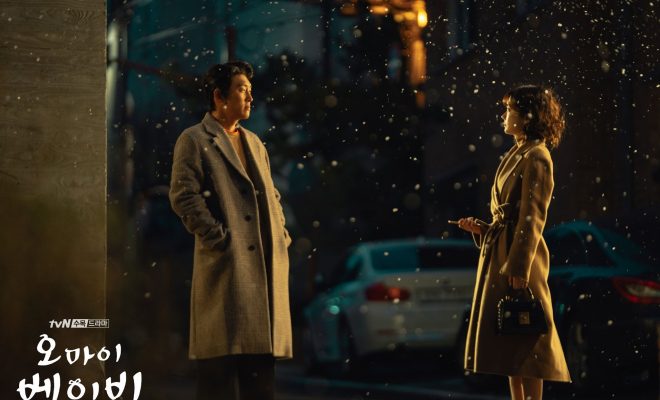 It is a race against time, but Jang Ha Ri is determined to do whatever it takes to have a child of her own.

Jang Na Ra, together with Go Joon, Park Byung Eun and Jung Gun Joo, star in this timely series. Oh My Baby follows the life of a workaholic woman in her late thirties. Our protagonist is in for a huge challenge as mounting pressure from family, friends and even from herself, to get married and have a baby is quickly taking its toll. 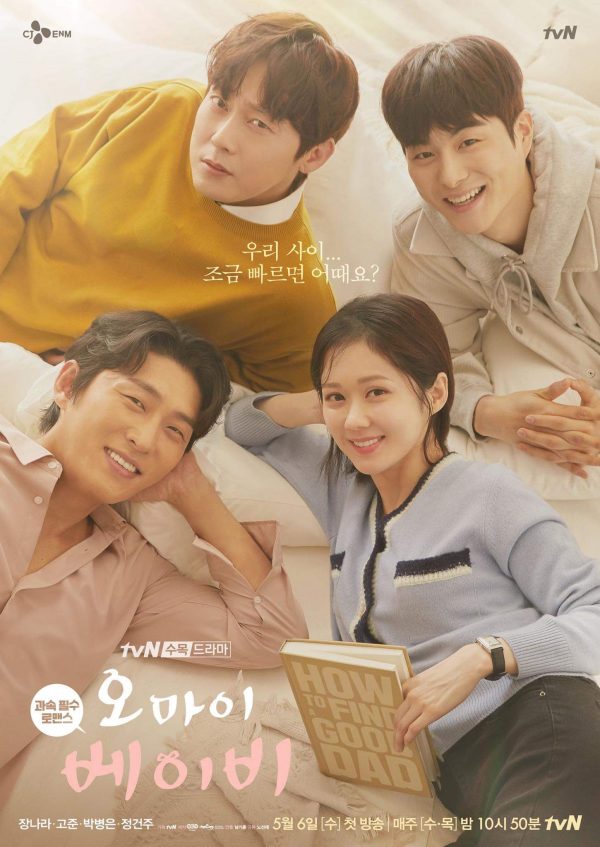 Waking up from a weird dream of giving birth to a puppy, Jang Ha Ri (Jang Na Ra) makes her way to a clinic for a consultation. She answers the doctor’s inquiries and tells her that she has been experiencing painful period cramps lately. But informs the doctor she has no time to have it looked at seriously as she has been quite busy. She asks for pain medicine and wants to take the AMH test (a laboratory test to check a female’s egg reserve count) before going home.

Jang Ha Ri makes it clear to the doctor that she has no idea when she would get married, but she is more determined to get pregnant first. She also says that she wants to freeze her eggs until she could find the “one”.

The Career Woman, the Photographer and the Old Friend

From the clinic, Jang Ha Ri heads straight to a specialty store to purchase props for an interview and photo shoot that day. As soon as she arrives at her workplace, she immediately arranges the set and proceeds with the interview.

Meanwhile, Kim Sang Hee exclaims in excitement. She rushes to show Nam Soo Cheol what she found – Han Yi Sang’s social media account. They look at what he has been up to and find out that he has been posting a lot of his “first time” activities. Sang Hee could not help but feel envious, but Soo Cheol reminds her not to tell Jang Ha Ri about their discovery. 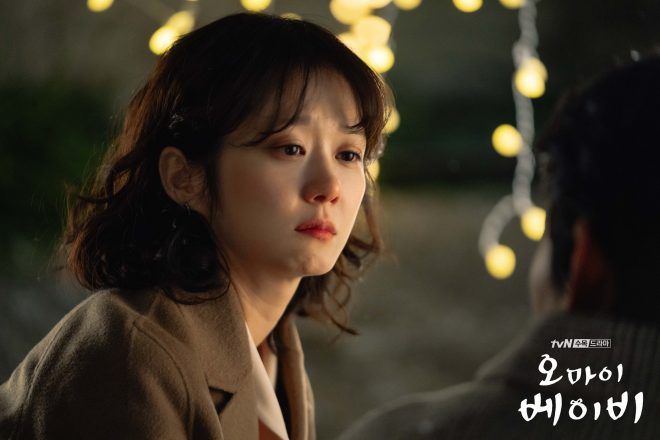 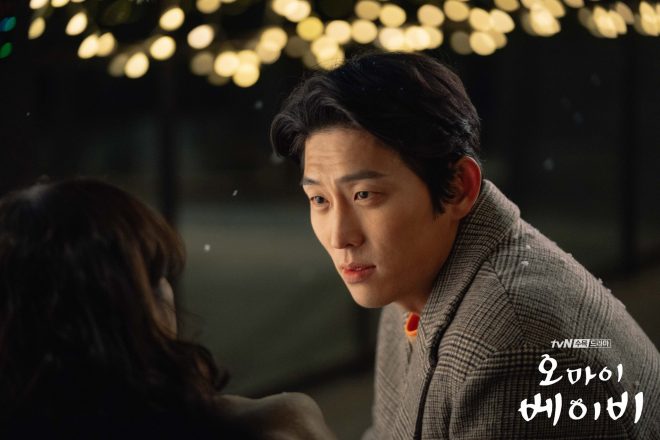 Ha Ri’s mother talks to Yoon Jae Young (Park Byung Eun) on the phone. He is kind of wary of moving to their house with a baby in tow, but the older woman tells him not to worry as it is her house not Ha Ri’s. Feeling relieved, Yoon Jae Young approaches his baby and gets on with the packing.

Han Yi Sang (Go Joon) is also busy settling in and bickers with a friend who is helping him out. Said friend is trying to persuade him to work for him but Yi Sang politely declines. The notification sounds blare on his phone as Soo Cheol comments on each of his post. 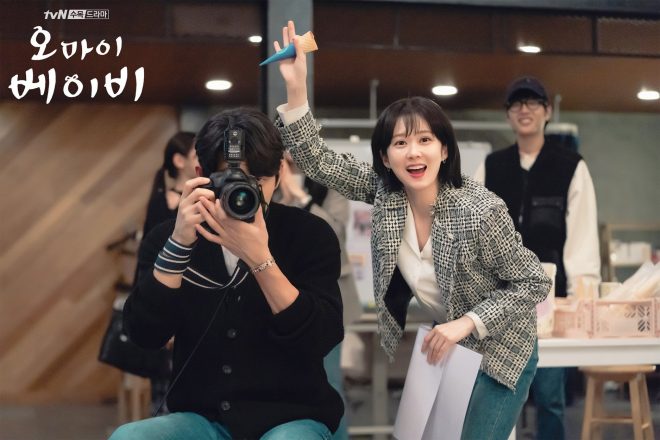 The Young Colleague and the elevator incident

A male co-worker gets Ha Ri’s attention when he calls her Auntie and she could not believe she actually responded to it. While on their way to the elevator, Ha Ri experiences a cramp which worries her friend Yeon Ho. Choi Kang Eu Ddeum (Jung Gun Joo) proudly states that he runs errands for his mother when she is on her period and that menstrual cramps are something not to be ashamed of. As she is writhing in pain, Eu Ddeum helps her and asks other people to let them through by announcing she is in pain due period cramps, much to Ha Ri and Yeon Ho’s embarrassment.

Inside the elevator, the young man worries a lot more as Ha Ri tries to hide her face from her co-passengers. However, Eu Ddeum innocently asks the others and tries to recall everything his mom told her about menstrual cramps. Reaching their floor, Ha Ri bolts out of the elevator while Eu Ddeum wonders if she is in so much pain. When asked by their co-passengers, he tells them that she is Jang Ha Ri, Deputy Manager of The Baby magazine. 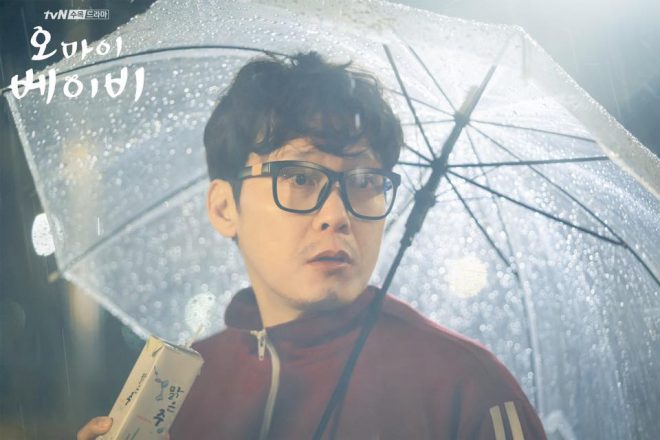 After disputing (and winning her case despite losing the fee) an advertising article, Ha Ri struggles to find printable articles. She asks her subordinates for ideas. However, her colleagues are tired and asks for a break to which Ha Ri agrees to.

As they munch on the box of snacks Ha Ri won from a radio show, Hyo Joo asks the reason Ha Ri remains single. She says that Ha Ri is attractive and successful so perhaps she is picky. Her friend Yeon Ho softly admonishes Hyo Joo. She tells them that Ha Ri may not look like it, but she is the type of girl who falls in love so easily. Yeon Ho then reveals that Ha Ri fell in love with a man in front of their studio in three seconds.

Clearly a sensitive topic for Ha Ri, Yeon Ho stops adding more to the story. However, Ha Ri shares she fell in love because he was crying. She has never seen a man cry before and that a man’s tears make a heart cry. However, she found out he is a “psycho”, so nothing happened. Her younger colleagues make a few suggestion so she can get married and have kids. Ha Ri scares her co-workers by saying that they are looking at their future.

To compensate for the lost advertising fee, Ha Ri pitches an idea to a company about writing an article regarding the stage of childbirth. The man welcomes her idea but says it will be a novel concept for a writer to write a comprehensive article on being pregnant (just like the program wherein fathers-to-be are trying to experience pregnancy). Left with no choice, Ha Ri agrees to go through the process. 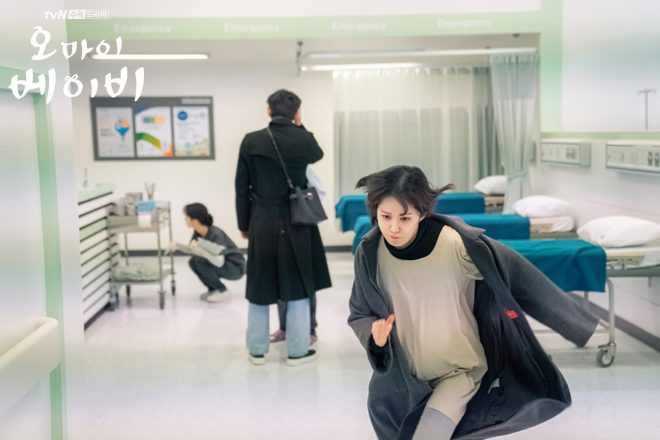 Wearing the fake pregnancy bump, Ha Ri goes to the mall. She has an unexpected encounter with Han Yi Sang. Flustered and not really knowing how to proceed, she almost greeted Yi Sang who pretends not to know or see her. The stress of that run-in manifests in another wave of painful cramps. The ladies in the comfort room mistakenly thought her water broke, seeing her wet pants.

In the basement parking the two ladies continue to fuss over Ha Ri even though she is trying to tell them her situation is not what they think it is. Han Yi Sang swoops in and drives her to the hospital. 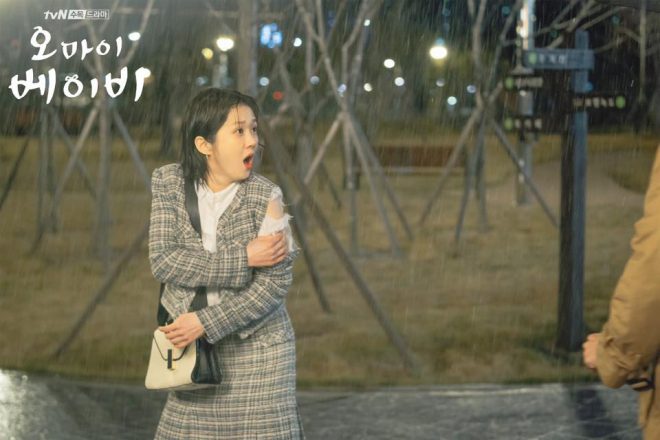 A series of unfortunate events

In her attempt to escape embarrassment, Ha Ri gets up from her hospital bed. However, she passes out due to extreme pain. When she wakes up, a grim news awaits her. The doctor discovers that she has endometriosis which is the cause of her severe period cramps. The physician offers her surgery to mitigate the pain, but it will immensely lower her chances to conceive.

Reeling from the discovery, Ha Ri wanders and lost in her thoughts. Han Yi Sang approaches her and asks if she is okay. Ha Ri replies by asking Yi Sang to marry her but realizes her blunder and makes a lame excuse.

Ha Ri runs an errand before going to her younger cousin’s wedding. This was a family event she told her mom she is not attending. Yi Sang drops her off on both locations and witnesses Ha Ri performs a song, as a wedding gift. On the reception, her relatives make comments regarding her single life, which clearly embarrasses her mother and frustrates Ha Ri. 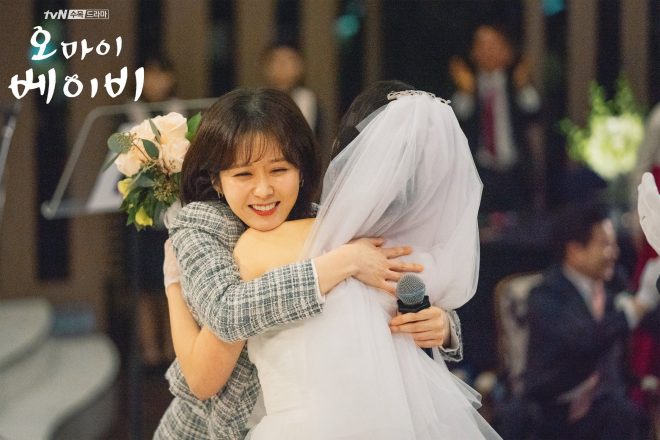 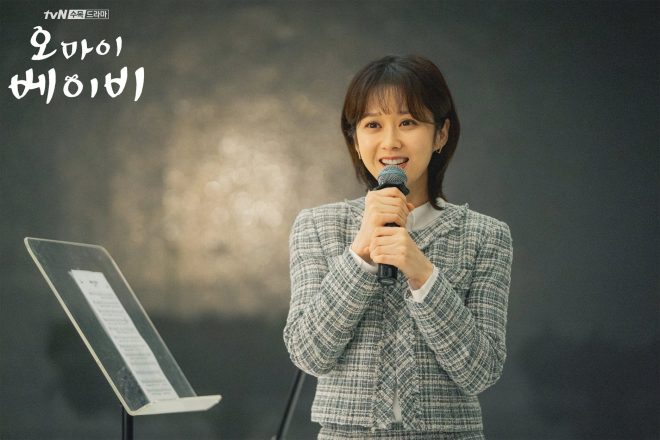 Yoon Jae Young sets Ha Ri up on a blind date. Han Yi Sang happens to be in the same café Ha Ri’s date takes place. Curious about their conversation, Yi Sang decides to eavesdrop by sitting at the table nearest the pair. He once again witnesses Ha Ri’s desperation to find someone or have a baby. The date unsuccessfully ends and Ha Ri goes out of the café only to find out it is raining outside.

Yi Sang follows her with an umbrella but Ha Ri refuses his help. They argue and Yi Sang accidentally rips Ha Ri’s sleeve. Jae Young sees this and thought Yi Sang is assaulting his friend. The three eventually end up sharing drinks and their frustrations in life.

After babysitting Jae Young’s daughter for a night which includes a quick trip to the emergency room, Ha Ri decides not to go through the surgery. This she proudly tells her doctor, adding that she has no intentions of getting married, but she is resolved to have her own child. 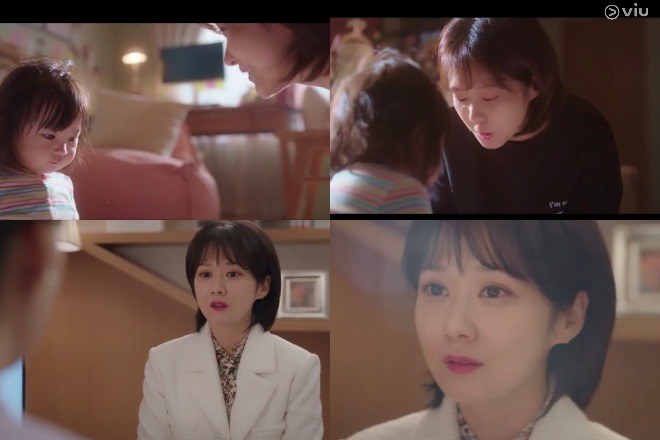 Oh My Baby definitely struck a chord as it clearly and realistically portrayed the plight of women. The series did not shy away from depicting real-life issues women, single, married or in a relationship, face every day.

The drama gave viewers a glimpse on how tough society and its norms can be on a single career woman. It painted a picture of how being a mother is such a full-time job. The series also highlighted the hardships every adult female bear in order to get by in a world full of expectations and demands.

I love how concerns such as pregnancy, motherhood, period pains, career and even starting a relationship are addressed so far in Oh My Baby. These issues are known and talked about but somehow some aspects of it remain taboo.

That “embarrassing” elevator scene should never feel that way. Period cramps hurts a lot (seriously), but I get that people are not comfortable hearing or discussing about it. I like how Jung Gun Joo’s character Eu Ddeum talked about it saying that it was not something to be ashamed of as women go through it. 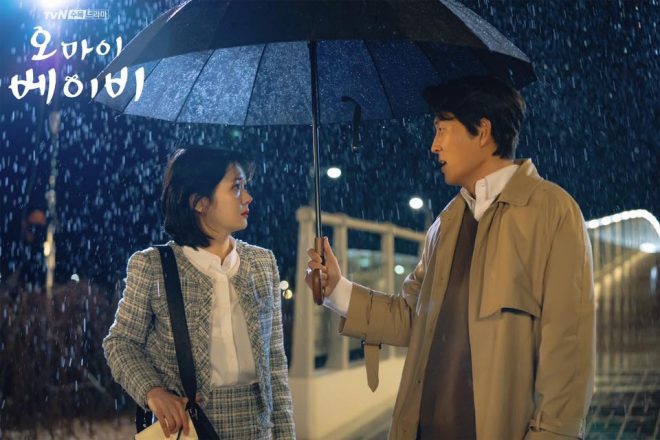 Jang Na Ra was definitely in her element as she gave life to Jang Ha Ri. She made the character personable and relatable. As a viewer you can feel her desperation and frustrations as a single woman pressured to have a family of her own. As Ha Ri, she is interesting and a character you can easily root for.

Meanwhile, Go Joon was a revelation. I have never seen him play a character as charismatic as Han Yi Sang. He pulled off that main lead vibe admirably. Although the series hinted at tangled relationships between Ha Ri and the three male leads, you can’t help but want Ha Ri and Yi Sang’s pairing to blossom.

Park Byung Eun as Yoon Jae Young is another relatable character and quite refreshing too. We don’t often see the perspective of the male character at the end of a divorce. Most of the times it is the female who gets the short end of the stick in this situation. 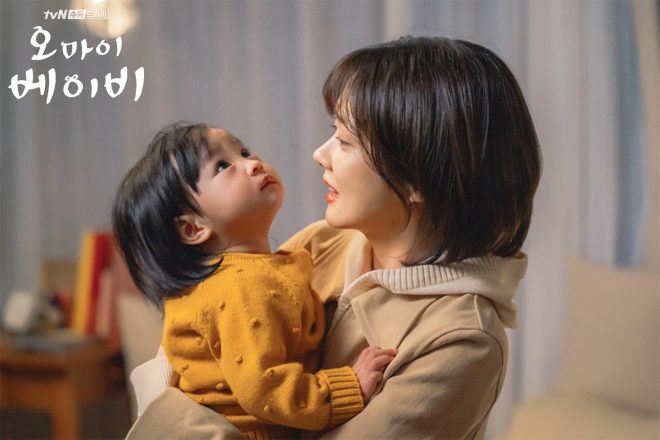 Oh My Baby sets up an exciting premise and coupled it with interesting characters with their own stories to tell. I am looking forward to seeing the development of these characters and the progression of the narrative. I want to see how Ha Ri will power her way through to achieve the goal she set for herself. Even if the odds are against her.

Oh My Baby airs on tvN every Wednesday and Thursday at 1050PM KST. Viewers can also catch new episodes on Viu a few hours after the Korean broadcast.