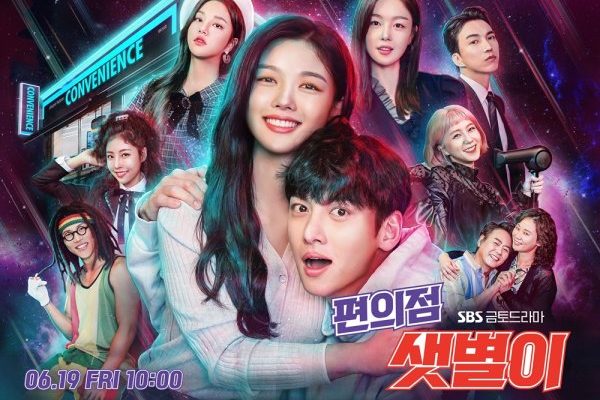 Brandishing a workplace romance full of good times, Backstreet Rookie establishes a mood perfect to cap off your weekend nights!

Light and easy, Ji Chang Wook and Kim Yoo Jung’s love pairing gives off swirling colors of zest that would bind the series’ groundwork to its viewers. Probably going to settle most of its story frames in the convenience store where the main characters work, look forward to how romance blooms between them. 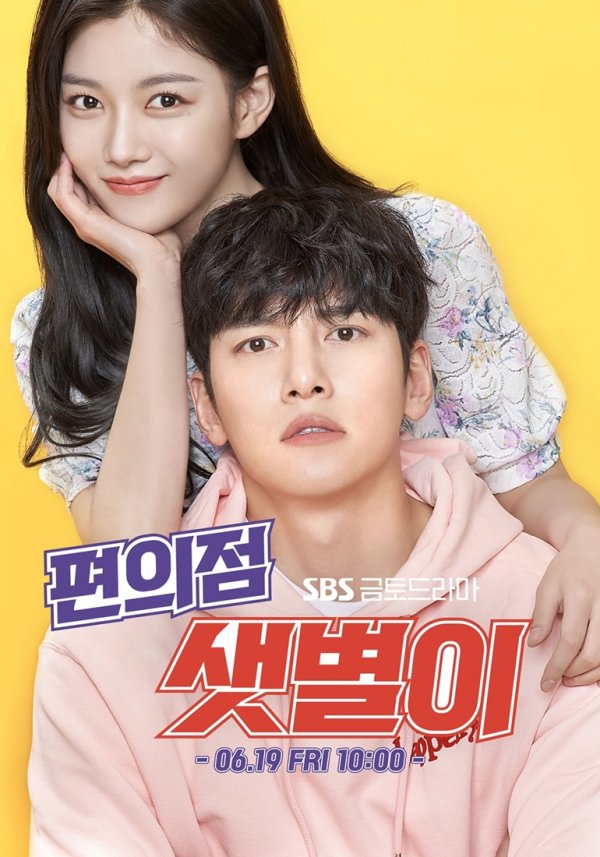 The girl who stole a kiss

Managing a convenience store is no easy thing for Choi Dae Hyun (Ji Chang Wook). Aside from shamelessly using his handsome looks to attract school girls as customers, the job physically exhausts him.

Enter Jung Saet Byul (Kim Yoo Jung), from head to toe she’s a natural charmer; and she is on a mission to be Choi’s convenience store part-time worker. However, Dae Hyun is bugged of the unsettling vibe beautiful Saet Byul gives off. After all, three years ago, she stole a kiss from him.

Highly-confident that there should be no reason for the convenience store manager not to hire her, Dae Hyun lay down the rules that would warrant Saet Byul a permanent temporary job. Things get awry though when Dae Hyun jumps into conclusion and suspects Saet Byul of stealing money, not realizing that it was his mother’s fault.

To make up for his misjudgment, Dae Hyun takes over Saet Byul’s task as she happily plays on her mobile phone. When he receives another cleaning task, he bursts and partly blamed her for not clearing the suspicion. Demanding apology, she sighs and relents on two slaving conditions, which he was left no choice but to fulfill.

Eager to meet his girlfriend, Dae Hyun happily welcomes his reliever. Saet Byul praises her manager for smelling good and assumes he did it for her. Her mood shifts when Dae Hyun quips that he is up for a date that night. Striking another confident remark, Saet Byul tells Dae Hyun to extend her apology to his girlfriend owing to her being beautiful and might cause their breakup one day.

All pumped up for a night of being together and sweating it out, Dae Hyun finds himself in a gym with his girlfriend who wants to work out together. Receiving a call from Dal Shik, he learns that Saet Byul is with her friends drinking happily in front of the convenience store. Rushing to the scene, Dae Hyun gets a blast from the past of his first encounter with the trio.

Reunion with the School Girls

Bewildered on Saet Byul’s audacity to drink while working, Dae Hyun is ready to lecture her, but she escapes as she fell asleep. Instead, Saet Byul’s friends reverse the situation and chides him for his uncalled for suspicion. Taunting him to prove he’s more than just a pretty face through alcohol tolerance, Dae Hyun finds himself joining the drinking session.

Later, Saet Byul sobers up and learns that her friends told Dae Hyun the reason why she is working in the store. However, they did not get his reaction because he fell asleep. Unbeknownst to them, Dae Hyun’s girlfriend, Yoo Yeon Joo (Han Sun Hwa) has been watching from afar.

Saet Byul drags her boss to the couch. Staring at him, she confesses that she decided to work in the store for her to see him everyday. She promises to work hard so she can become a regular employee. Just as she is about to leave, Dae Hyun reaches for her hand, mumbling for her not to leave.

Beaming, Saet Byul’s smile fades when Dae Hyun continues to mumble words of gratitude, not to her, but to his girlfriend. Throwing some punches, she leaves the break room.

Yeon Joo and Dae Hyun go for an Italian dinner as she tries to make her boyfriend confess of his activities last night. After dinner, Dae Hyun opens up about their next move as a couple, and suggests meeting both their parents should be done even when they are busy with work. But Yeon Joo responds that she will ponder on it.

Dae Hyun casually blurts out how he is going to fire his new part time worker for drinking with her friends last night. Yeon Joo, who knows her boyfriend joined the fun, pretends not knowing it and listens to him blab the opposite of what he really did with the girls.

Debating how he can fire Saet Byul, a problem arises when Dae Hyun got invited by the police for selling cigarette packs to a minor. He digs on the CCTV footage to obtain a proof that he checked his ID to avoid a looming two-month suspension. He also asks Saet Byul not to tell his family as it will just worry his parents.

After pulling off an all-nighter, Dal Shik offers help so Dae Hyun can refresh himself. But, he ends up dozing and waking up to the sight of Saet Byul’s friends who were amazed to see a picture of primitive man in a convenience store’s break room.

The awe turns rage as they exchange unfriendly words leading to Dal Shik getting beaten up. Dae Hyun and Saet Byul rush to set things in order. Just then, Dae Hyun receives a call from Yeon Joo who needs help with her car. He rushes to take care of his girlfriend’s mess making Saet Byul angry because he has more pressing concerns to take care of.

Saet Byul to the Rescue

While taking care of Yeon Joo’s car, Dae Hyun spots the young man who caused his current problem entering a convenience store with the intention to buy a cigarette pack again. Showing no remorse, Dae Hyun grabs his collar and chides him of how he is so heartless not to think of other people. He asks for when he first visited the store, the young man refused to respond.

Running down the reasons why the convenience store is important to his family, the uncaring youth replies his fury is baseless because his store will only be suspended selling cigarettes, and they can still sell other goods. Enraged, Dae Hyun halts to physically giving the youngster a lesson, when he received a call from Saet Byul, intentionally luring him away from trouble.

Saet Byul confronts the youngster and successfully gets the information they need. Solving the problem, Dae Hyun notices a small scratch on her hand so he tends on it.

She faintly lectures him of choosing Yeon Joo’s problem than his own, but assures that she does not care because she only wants to solve the problem so she can be an official part-timer.

Dae Hyun cuts her celebration right away, replying he does not remember agreeing to it. She tries to grab the USB stick she just gave, but he is quick to evade her. Time stops, as they stare at each other. When Dae Hyun wakes up from the trance, he tries to ask her about the kiss they shared three years ago, but ends up swerving it to a different topic.

Dae Hyun surmises on his memory as he stares on his perky part-timer. He makes up his mind as he does not want her to be a victim of prejudice just like what happened to him in the past, when he used to work in a big company, but often look down upon his not so illustrious education.

He calls Yeon Joo to inform her of his decision which the latter is obviously not happy about. She asserts how they should make the decision together, but Dae Hyun remains firm about how he is the one in charge of his business.

Backstreet Rookie completes its character introductions on its premiere week while also presenting the world of convenience store. Sparks definitely fly between Ji Chang Wook and Kim Yoo Jung in Backstreet Rookie. Viewers who love rom-com are in for the treat as the zesty mood of the drama really invites you to cheer for something special to happen between the convenience store manager and her part-timer.

Kim Yoo Jung is rocking her role as Jung Saet Byul, I bet she will become a favorite kdrama heroine spirit by regular patrons. Her confidence level is just adorable, especially its sedating effect to peace-loving Dae Hyun. Unearthing more of her stories is inescapable because it will explain her quite mischievous and uncaring attitude.

Interestingly, the series is quite wordy, but the lines thrown are so far entertaining. In particular, I can’t wait for more of Saet Byul’s love-yourself-declarations-a-la-BTS. She’s just the life of the party so far.

Given the easy mood of this drama, I am only expecting heart-fluttering moments from Ji Chang Wook. His character is pictured as self-sacrificing in contrast to Saet Byul’s me-first attitude, thus, the bickering romance is so far fetching.

The writing has so far led us to see what Saet Byul lacks, Dae Hyun has and vice versa. Ergo, Backstreet Rookie mixes healing mood and impressions of optimism so far.

Notably, I love how Saet Byul’s friends quip real and adorable thoughts and I anticipate more quirky moments from them and Dal Shik. I also look forward to the day when Saet Byul’s self-love flows to Dae Hyun, so he can love himself a little more. Because he deserves it.

Admittedly, the series does not give you that spectacular feeling since it follows the Korean rom-com drama prototype. It is light, spirited, but might have to work more to induce the addicting drive.

Backstreet Rookie airs on SBS every Friday and Saturday.