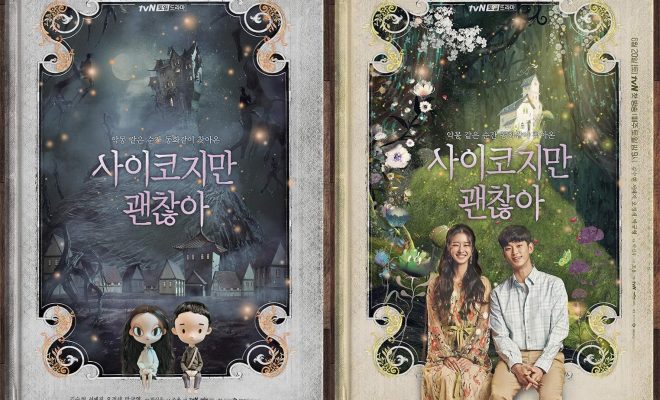 K-Drama Premiere: “It’s Okay To Not Be Okay” Stuns With Bewildering Narrative On Healing And Love

Accelerating with a powerful start, It’s Okay To Not Be Okay intrigues with its unique plot and exciting characters.

It’s Okay To Not Be Okay is finally here and has exceeded all the expectations. Right off the bat, the drama starts with a bang making it worth all the wait. 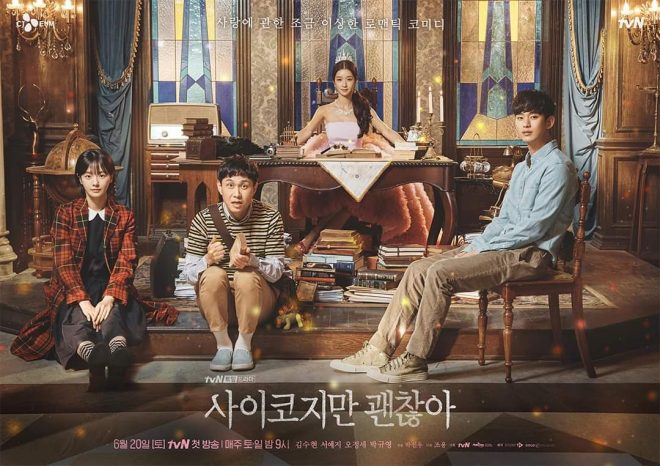 Presenting weirdly interesting characters and a fantasy-like cinematography laced with mystery, It’s Okay To Not Be Okay sweetly enchants in its premiere week episodes. Further enhancing the quality of the drama is the intense chemistry of the main leads, who manifests perfection in all of their scenes.

Top-billed by Kim Soo Hyun and Seo Ye Ji, It’s Okay To Not Be Okay paints a miraculous romance between two people who were least likely to fall in love. Kim Soo Hyun portray Moon Gang Tae, a caregiver at a psychiatric hospital, who has been living a tough life for a very long time. Burdened with the responsibility of taking care of his autistic older brother, Moon Sang Tae (Oh Jung Se), he has given up on love. 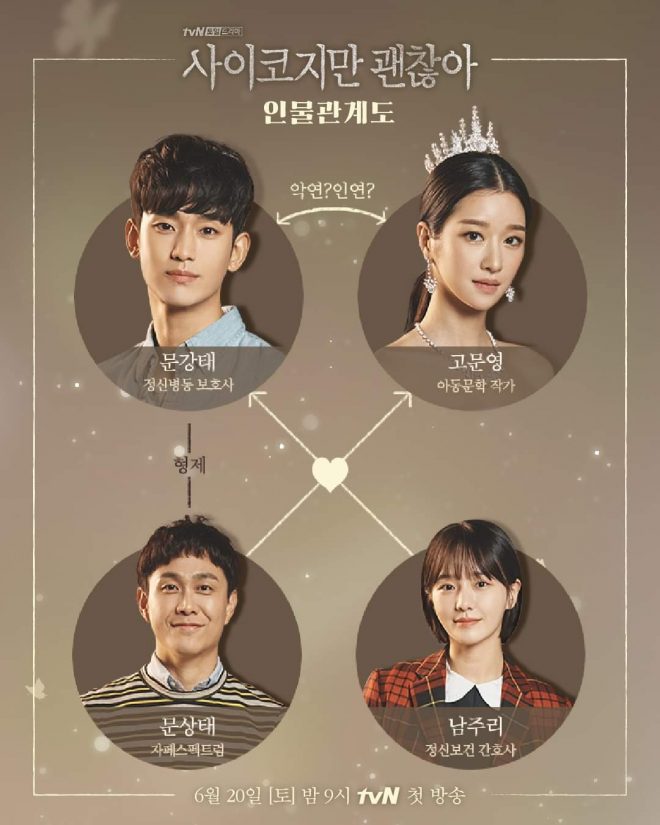 The premiere opens with a Tim Burton style animation. There is a young girl in a castle who has been isolated and has no friends. One day, she moves out of the castle and tries making new friends by giving them gifts. However, the other kids were horrified to see her presents and cast her away.

Angered at the treatment, the young girl lives her life cruelly by hurting other living beings. But suddenly, she has an accidental encounter with a young boy. The young boy would follow the girl everywhere and it was obvious that he liked her.

To profess his liking for the girl, the young boy brings her flowers. But then the girl shows her true side to the boy as she brutally rips the butterflies. Terrified the boy runs away and the girl is left alone again. A voice, which happens to be the girl’s mother tells her that it is her destiny to be alone as she is a monster. Then, Go Moon Young appears on the screen and responds in affirmation to the voice. 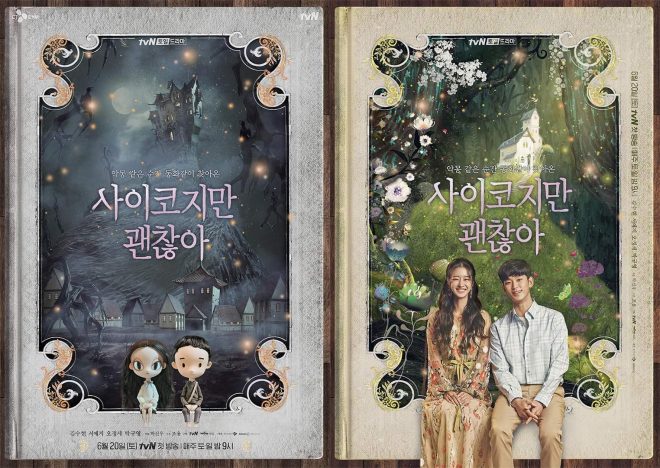 The Boy, Who is Still Living His Nightmare

Moon Gang Tae’s everyday life is full of struggles. Being a caregiver at a psychiatric hospital, he has to deal with all kinds of patients. Sometimes, he gets physically hurt while at other times, he faces worse atrocities. Additionally, in order to make ends meet, he works part-time jobs.

Thus, Moon Gang Tae is always busy with work and taking care of his older brother. Also, he does not stick to one location for long. Therefore, Moon Gang Tae does not try to get close with other people either.

A flashback from the past shows that his mother was murdered and the only witness was Moon Sang Tae, according to whom it was the butterfly who killed their mother. After he overhears that the authorities are going to separate the brothers, Moon Gang Tae runs away along with his brother.

Since then, year after year, at about the same time, Moon Sang Tae’s nightmares of the butterflies appear again. As a result, the Moon brothers has been living a nomadic life. 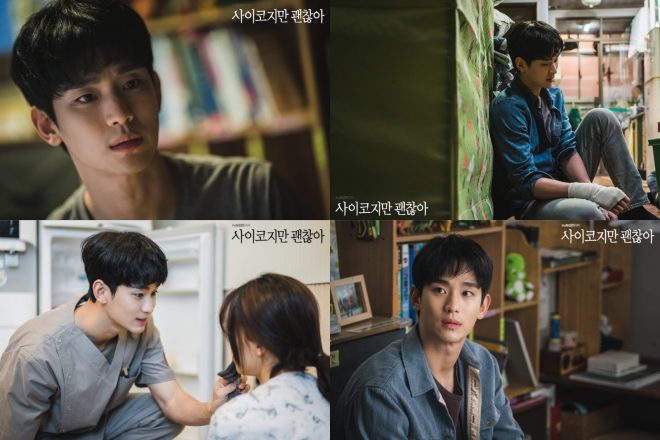 The Heartless Girl, Who Does Not Idolize Fairytale Princesses

Though a successful author, Go Moon Young does not care about anything and lives recklessly. She has had done many questionable actions that could sabotage her 10-year career. But, the only reason her reputation is still unscathed is because of Lee Sang In (Kim Joo Hoon), CEO of her publishing company, who has been bribing people to keep their mouths shut.

Go Moon Young also harbours hatred towards her father. When Nam Joo Ri (Park Gyu Young), a nurse from OK Psychiatric Hospital calls to get a signature of consent for surgery of Go Moon Young’s father, she flatly refuses. She remarks that her father is dead to her and considers herself an orphan.

It is later revealed that Go Moon Young’s father had attempted to kill her in the past. 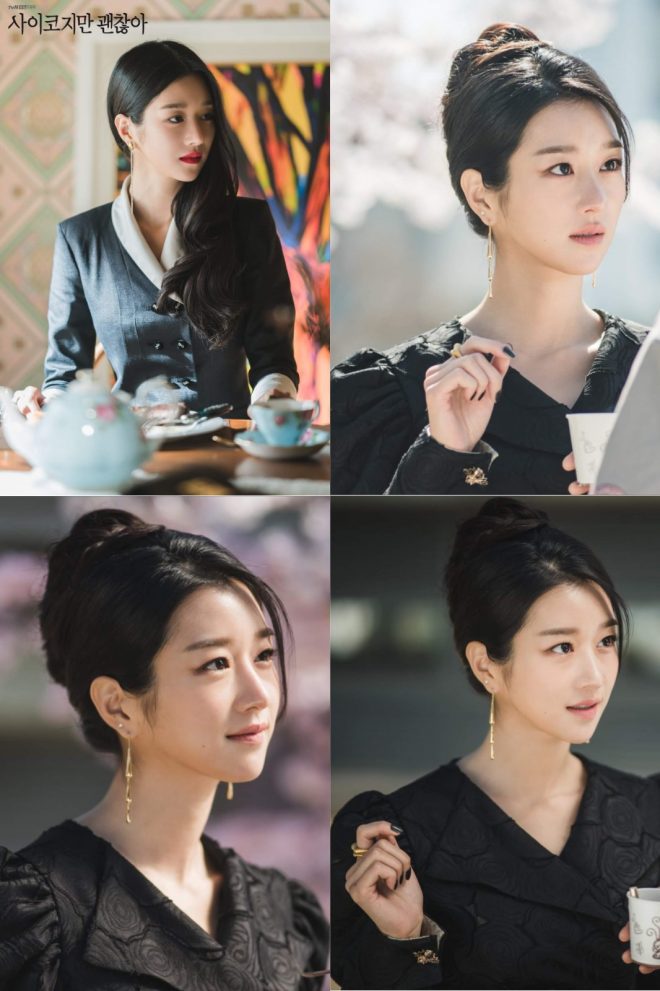 The Craziest Sort Of Encounter

As it happens, Go Moon Young has a special book reading session for sick children at the same hospital where Moon Gang Tae is working at. On the same day, a violent patient gets admitted, who had planned to kill his daughter and commit suicide.

However, the very patient escapes and reaches where Go Moon Young’s reading was taking place, while searching for his daughter. The book reading event gets halted abruptly in the middle with the hospital securities rushing in to find the man.

Unnoticed by anybody, the man drags his daughters along but Go Moon Young interrupts and sends him to a further rage with her snide comments. The man tries to strangle her but Moon Gang Tae arrives at the right moment to save her.

Making things worse, Moon Gang Tae also has to the bullet for the incident and gets fired from his job. 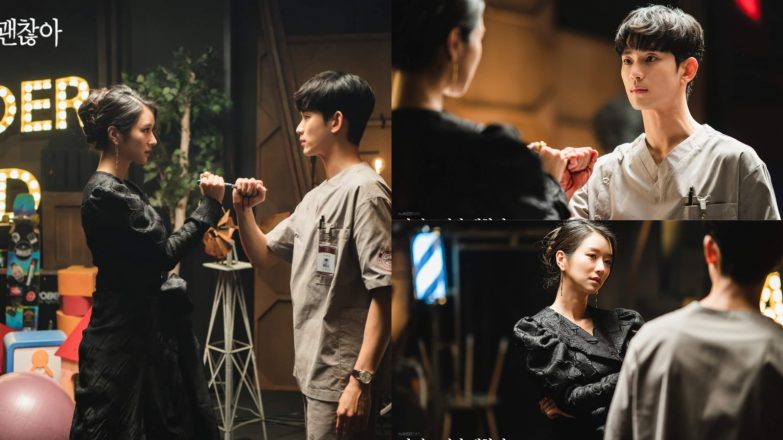 The Familiar Eyes and More Chaos

Thereafter, Moon Gang Tae goes to meet Lee Sang In at his office. Unexpectedly, he runs into Go Moon Young, who questions whether he is there for bargaining his reward. Moon Gang Tae answered that he was there with the the hopes of seeing her again because her eyes remind him of someone he knew in the past.

Brief glimpses of flashback shows that what was shown in the animation in the beginning is actually the childhood memory of Moon Gang Tae and Go Moon Young.

As for the bribery, Moon Gang Tae does not accept anything but agrees to Go Moon Young’s autograph for his brother. But Go Moon Young does not sign her autograph rather she writes an invitation to Moon Sang Tae for her book signing event.

On the day of the event, Moon Sang Tae gets into trouble when he excitedly goes to a kid wearing a dinosaur uniform. The kids’ parents are repulsed and the father even hits Moon Sang Tae and pulls his hair. This triggers Moon Sang Tae and causes his  meltdown. At the end, Go Moon Young comes forward to help the brothers. 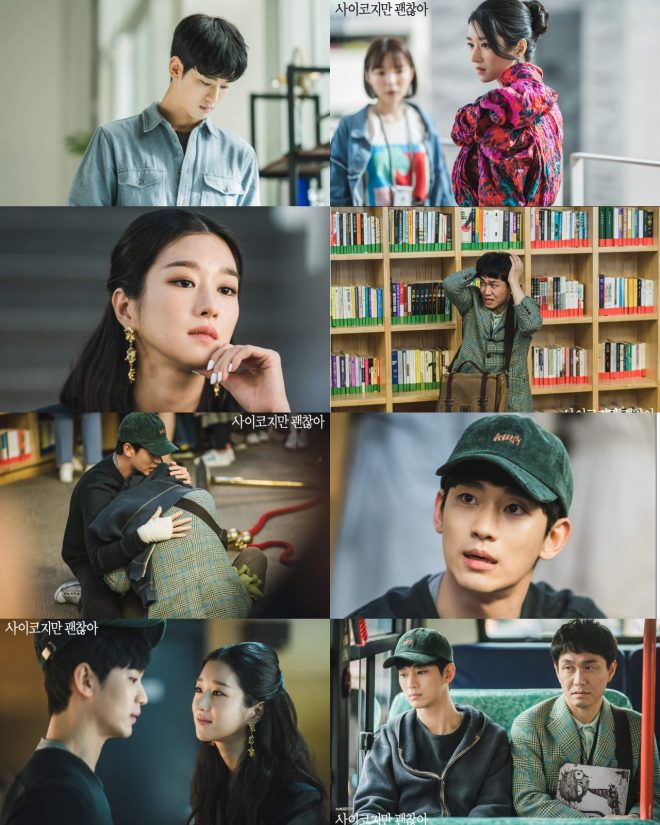 The Proclamation of a New-Born Obsession

Although, Go Moon Young had helped the brothers, her actions were considered too outrageous and violent. Lee Sang In is overwhelmed at the various problems that have been occurring since the incident as more and more videos of Go Moon Young’s rude behaviour surfaces online.

Meanwhile, Go Moon Young is no where to be found. Turns out the writer has taken quite a liking for the caregiver and wants to own him at any cost. To learn more about him, she had manipulated Yoo Seung Jae (Park Jin Joo) to dig up information on Moon Gang Tae.

Finding the news about Moon Gang Tae’s new whereabouts which is at OK Psychiatric Hospital located in the same city from their younger days, Go Moon Young takes on the steering wheels to move there. Quoting the lines from Hans Christian Anderson’s fairytale, The Red Shoes, Go Moon Young narrates on why obsession is such a noble thing and that she has found her red shoes. 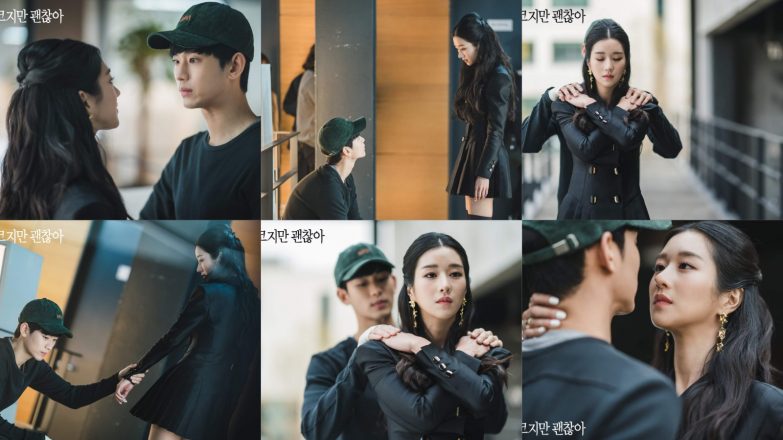 It’s too early to make a prediction but judging from the first two episodes, it can be said that It’s Okay To Not Be Okay is going to be one of the most talked about dramas of this year. From the unique storytelling to immersive acting and high-quality camera shots – everything about this drama screams perfection.

Thoughts on the Actors

I would say Kim Soo Hyun chose the right project for his return to the television screens. As stated by the character Go Moon Young, his eyes are indeed beautiful. Through those eyes, one can see the various emotions of Moon Gang Tae and if smiles can kill, it’s definitely his.

On the other hand, Seo Ye Ji strikes a strong impression as the sassy female lead, Go Moon Young. With the leading lady possessing sociopath tendencies, I am wondering as to how love falls into the equation and changes things for both of them.

Another scene stealer from the premiere week is Oh Jung Se. His realistic portrayal of Moon Sang Tae evokes lots of empathy for the character. The relationship of the two brothers is pure gold and I love their moments. I cannot help but smile whenever Moon Gang Tae asks his older brother who does he love more between him and Go Moon Young. 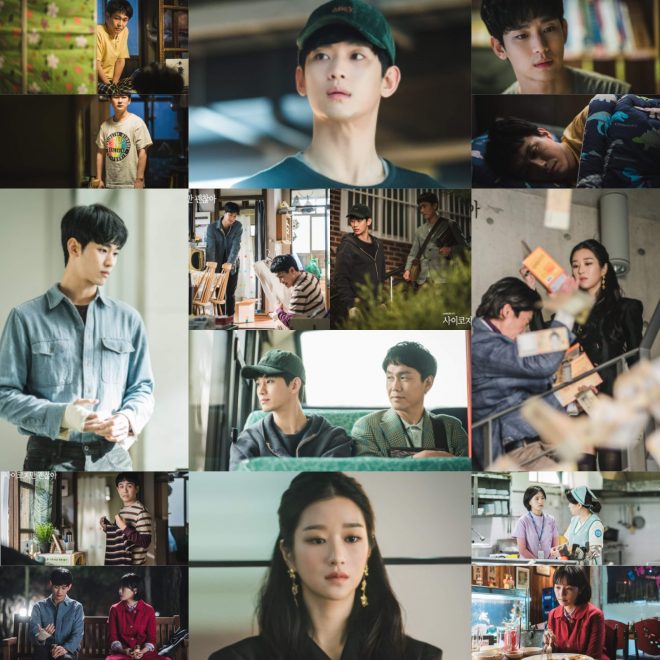 Thoughts on the Plot

As for the plot, there are just too many things about It’s Okay To Not Be Okay that draws curiosity. Firstly, the butterflies – a young Go Moon Young massacred a bunch of those creatures while, according to Moon Sang Tae, it was the butterfly who killed his mother. Given the fact, that they all used to live in the same town when they were younger, it appears like there is a connection.

Also, quite striking in the drama is Go Moon Young’s fairytale books. In our real lives, we have seen the stories in children books being sugar-coated and filled with only happiness. Go Moon Young’s writings are quite opposite of that. Her books consists of deep, dark stories that conveys the message that feelings of pain and hurt are necessary in order to grow.

It’s Okay To Not Be Okay airs every Saturday and Sunday on tvN and is also available to stream on Netflix.

Hellokpop, as an independent Korean entertainment news website (without influence from any agency or corporation), we need your support! If you have enjoyed our work, consider to support us with a one-time or recurring donation from as low as US$5 to keep our site going! Donate securely below via Stripe, Paypal, Apple Pay or Google Wallet.
44
SHARES
FacebookTwitter
SubscribeGoogleWhatsappPinterestDiggRedditStumbleuponVkWeiboPocketTumblrMailMeneameOdnoklassniki
Related ItemsIt's Okay To Not Be OkayIt's Okay To Not Be Okay PremiereKim Soo HyunOh Jung SePark Gyu Youngrecapseo ye ji사이코지만 괜찮아
← Previous Story Eric Mun, Yoo In Na & Lim Ju Hwan Dabble On Romance & Espionage In New MBC Drama
Next Story → K-Pop Comeback Spotlight: Maddox – Third Single “Sleep”