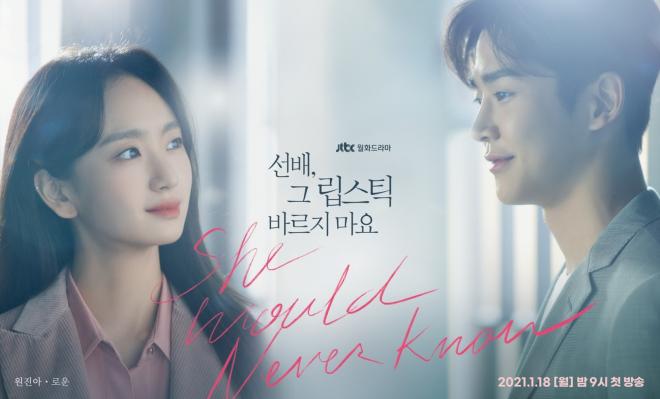 Setting its premiere week on a faint tone, She Would Never Know presents a standard narrative about relationships and the questionable choices made out of it.

She Would Never Know starts with the self-effacing story about a young man who falls in love with his sunbae at work. Headlined by Won Jin Ah and SF9’s Rowoon, jTBC’s newest offering opens with a weak characterization and introduces the predicament challenged by the focal characters.

The first episode begins with marketers Chae Hyun Seung (Kim Rowoon) and Yoon Song Ah (Won Jin Ah) pitching their cosmetic product in front of company representative. Working closely together as a mentor-mentee, Hyun Seung is quite comfortable around her, and so does she. However, since the very beginning they became colleague, Song Ah had set her walls high, considering him as a co-worker only.

Wanting to impress his crush, Hyun Seung asked his officemates for a birthday dinner as a way to get closer to Song Ah.

During the dinner, Hyun Seung is quietly observing Song Ah across the table. Suddenly, she got distracted after receiving a text. She heads out to answer the call midway through eating, urging Hyun Seung to discreetly follow her. There, he discovered that his crush is dating their Brand Manager Lee Jae Shin (Lee Hyun Wook).

The next day, he came to his sister’s (Wang Bit Na) wedding dress shop and told his worries about what he saw. He contemplated whether to give up his unrequited love to his sunbae. Or not, because he spotted their manager with his soon-to-be bride and fitting her wedding dress. 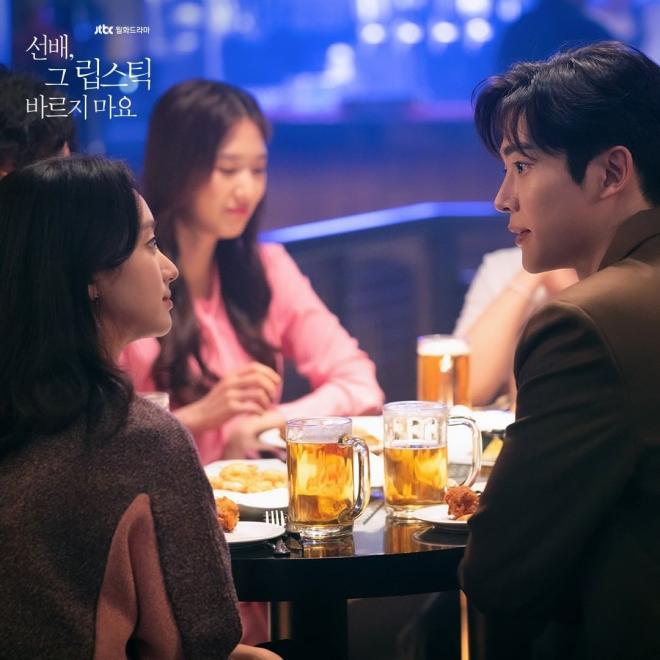 Subtly hinting to Song Ah about the shocking sight yesterday, Hyun Seung confessed his feelings. He took her to his sister’s shop to catch her boyfriend and chairman’s granddaughter in act. Soon as they get there, Hyun Seung told her about what she’s about to see. Finally, she witnessed the two together behind the curtains. But, she refused to believe what she just saw, and disregard Hyun Seung’s intentions. 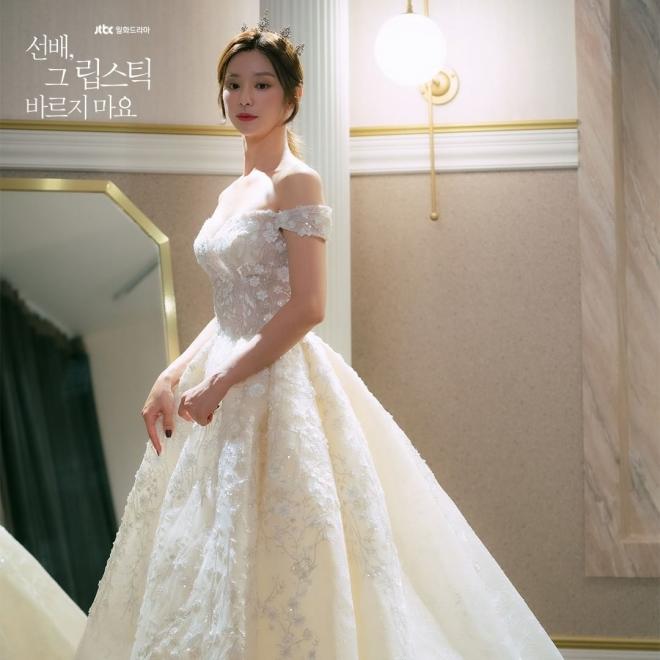 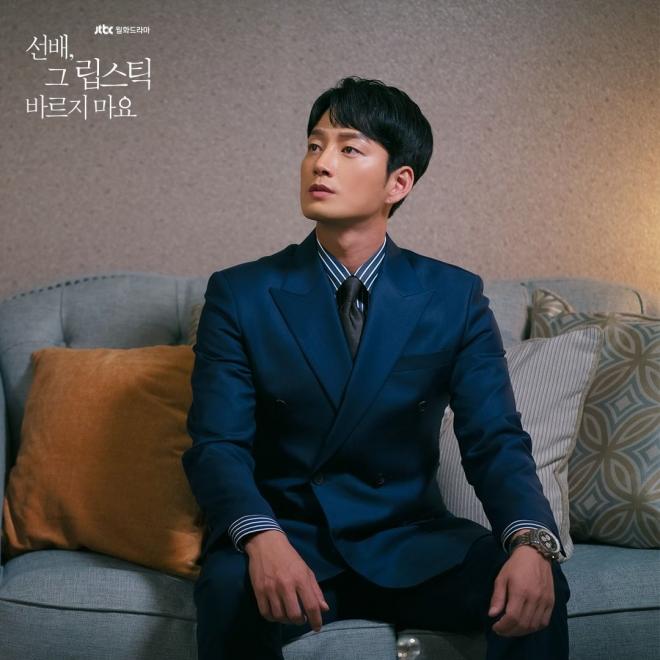 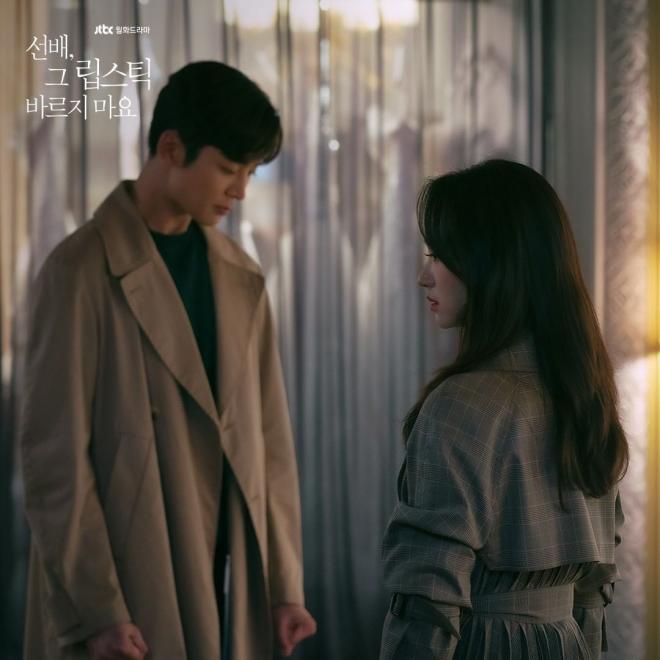 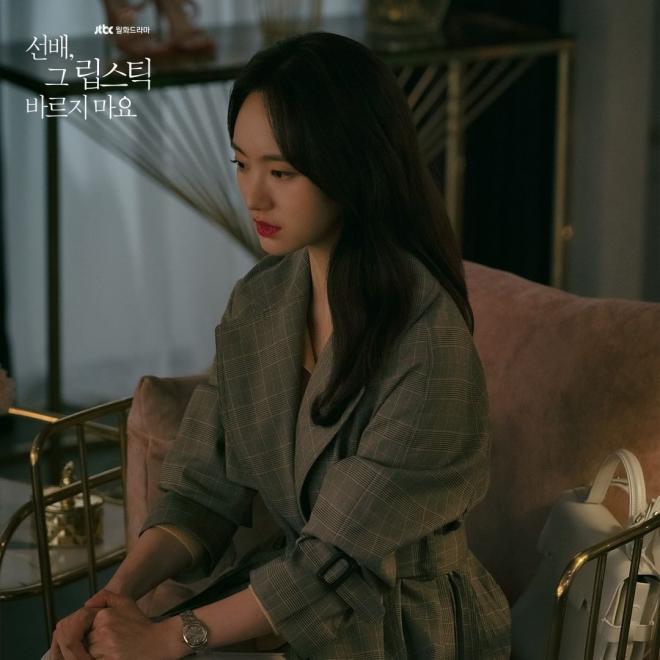 After her recent discovery, Song Ah became unreachable, making BM Lee worried. He then decides to meets Song Ah after work. She tried testing him about what he thinks about their two-year relationship. And so she asks whether they should date openly and reveal to everyone that they’re dating. Like what she expected, he told her that he’ll think about it instead. 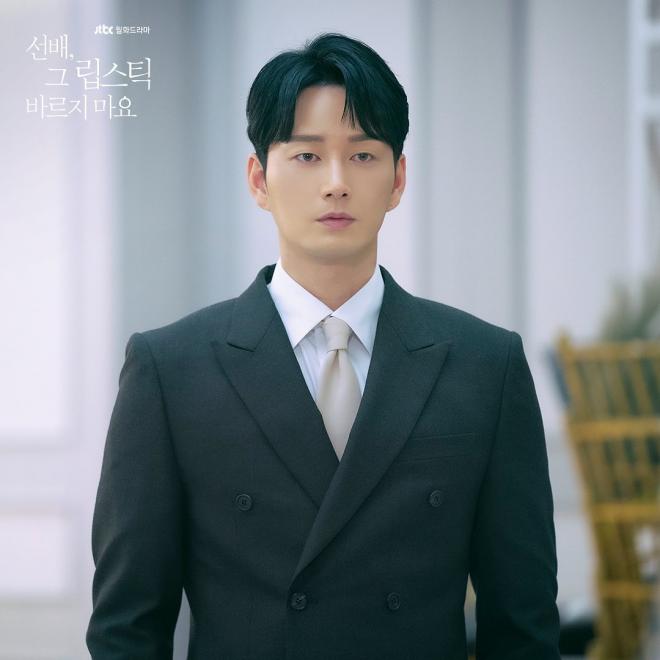 Confused and emotionally unstable, Song Ah did not know what to do next. What she feared of has finally came. On the other hand, Hyun Seung who’s feeling guilt about his actions, drown himself with alcohol. He came up again to his sister asking if he did the right thing, which she confuted.

The next night, as he walks home from a run, he bumps into Song Ah. After all the chaos in her mind, she show up in front of Hyun Seung and asks what she should do. Taking advantage of the situation, he suggests that they should date. 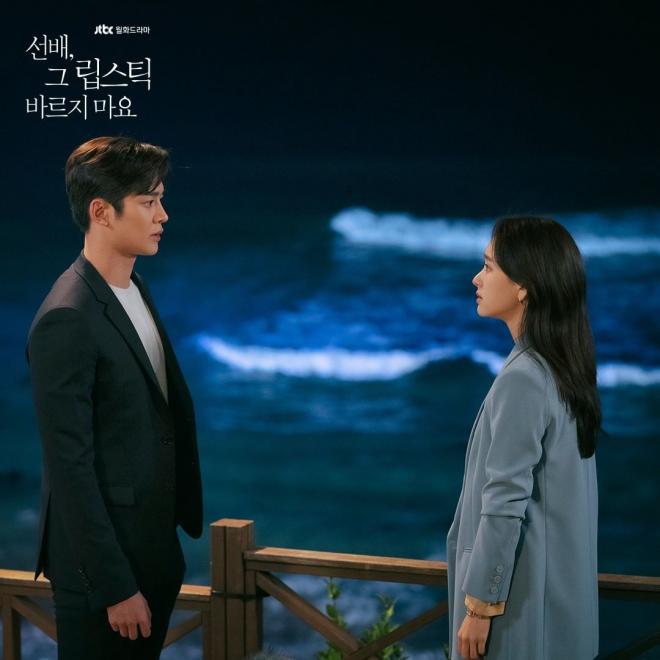 She Would Never Know sealed its opening week as an average type of office romance drama. For viewers consumed with too much relationship dramas and looking for a fresh spectacle, this show may not bind your attention.

Unfortunately, everything else about the story was stereotypical. I have to say that I still cannot feel the chemistry between the leads, but since its too early, we’ll have to see how it progresses in the future. Also, something’s lacking about the narrative and nothing precisely stood out and fully captured my attention.

Nevertheless, it’s still interesting to find out Hyun Seung will win his sunbae‘s heart whom he hurt so much. I am also keen to know how Song Ah will finally face her boyfriend cheating on her.

Since the pilot week also previewed the character of the chairman’s granddaughter Lee Hyo Joo (Lee Joo Bin) as someone who do whatever it takes to get what she wants, I am curious what will happen if she discovered that her soon-to-be groom has a secret lover.

She Would Never Know airs every Monday and Tuesday via jTBC at 9 PM (KST). International fans can watch it on iQIYI.