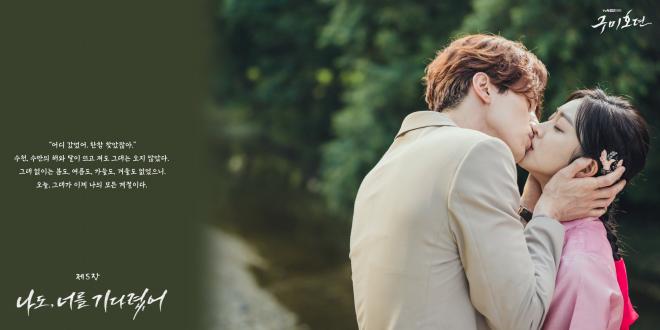 Finding Lee Yeon’s reincarnated first love seems to be the first of more trials to be faced by the hero of Tale of the Nine Tailed.

Lee Dong Wook and Jo Bo Ah inch to a more solid relationship in episodes 5 and 6 of Tale of the Nine Tailed. Along with that, the series has also unveiled key supporting characters that are part of its big pictured narrative.

We also saw a glimpse of Lee Rang’s past which partly explained the seemingly quenchless grudge he has for his brother. Meanwhile, episode 6 was shot mostly in one setting, but it has a jam-packed details that prelude to the problems set to be tackled by the lead love pairing,

After cushioning Ji-ah’s fall and braving the arduous punishment at Blade Mountain, , I mean gumiho Lee Yeon recuperates through the help of Ji-ah. Fortunately, his supernatural power as a gumiho warrants fast-healing process.

In the morning, Vet Shin-ju (Hwang Hee) rushes to his master’s aid against Lee Yeon’s hushing because Ji-Ah is sleeping by his side. Getting emotional about Lee Yeon’s 600-year wish finally came true, he embraces him in tears.

Sensing Ji-ah’s curious gaze, he introduces himself as Lee Yeon’s right hand man, housekeeper, bodyguard and doctor. Knowing Lee Yeon is better off with Ji-ah, who carries the “power of love” cure for Lee Yeon, he leaves to go to his clinic. Before that, he lists down the child-like whims of his high-maintenance boss to Ji-ah.

Apparently, the mighty gumiho also likes bathing with rubber duckies aside from his special penchant for mint chocolate ice cream.

The ‘imoogi’ Lee Rang helped to live again in the world has been growing at a rapid speed and knowledge. His attitude is naturally rude while pictured as a young boy, and his meal appears to be feeding on human flesh. His loyal servant has also been revealed to be the president of the broadcast company where Ji-ah is working.

After another meddling with a human life, Lee Rang surprisingly shows his first kind act by rescuing a wounded dog being tortured by young baseball athletes. Serving them punishments they deserve, the dog tries to appeal with his puppy look so Yu Ri and Lee Rang take him. But the latter refuses.

Reckoning that moment when his brother left him alone in the mountains and his pet dog died pierces to his heart and memory. Yu Ri, who was won over by the dog’s pleading look, brings it to Vet Shin-ju to be treated. 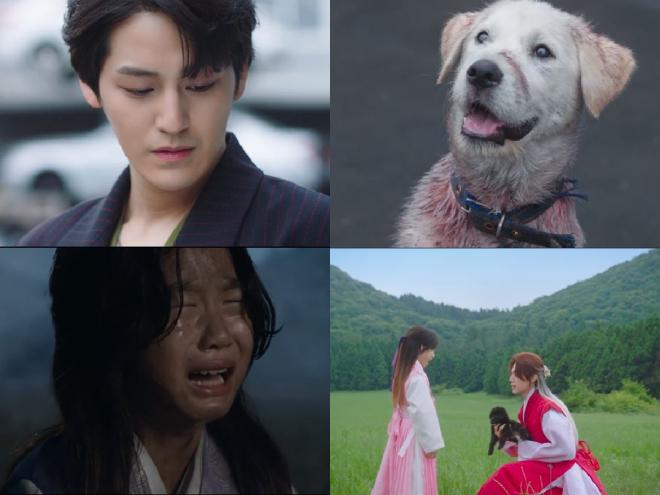 When not working for a new show or mulling over her plans for her parents’ disappearance, Ji-ah has this generous spirit to spread compassion. Even after being endangered if not for Lee Yeon’s saving, she helped the two ghost sisters get their closure. Through Lee Yeon and Ji-ah, their father learned that it was his jobless younger brother who caused their deaths and even molested them.

Later, the two share an umbrella and take a quick walk. Both are obviously feeling undeniable feelings that make them feel closer to each other. They go for a drink and talk about their preferences. Albeit, having plenty of differences, they happily cheer finding common likes.

Curious about Lee Yeon’s dream, Ji-ah asked the question. Lee Yeon genuine replies how he only wishes to be a human. Surprised at his answer, Ji-ah quips how human life is all but suffering and he can just get a taste of it easily at the subways like how underworld is. Citing how careers require stress, all-nighters, overtimes and nagging boss make up his strange wish.

After hearing Ji-ah’s wish to just be with his parents, Lee Yeon makes up his mind to help with her earnest wish.

Bribing grandma Taluipa with iced americano, Lee Yeon asks for help to trace what happened to Ji-ah’s parents. He was led to Jang-seung, the same man who helped Ji-ah not board the bus that met the accident previously. Forcing the information he needs, he disrupts Ji-ah’s lunch for them to meet someone who can give information to Ji-ah’s vanished parents.

Meanwhile, unlucky Jang-seung was also visited by Lee Rang asking information for tiger’s eyelash which he also needs. Ji-ah and Lee Yeon drive to where the district magistrate is. Telling Ji-ah to stay on a spot, he goes to look for the person. When he gets back at the spot where he left her, she is nowhere to be found.

Ji-ah, who saw a hanbok rental in the place availed one and was roaming happily. Lee Yeon spots her amidst the crowd and follows to where she is heading. Amazed on a pretty bridge decorated with colorful cloths, Ji-ah beams happily. Gazing at her smiling face,

Swept by the moment and longing that traces back to Joseon era, Lee Yeon (Lee Dong Wook) scoops a kiss on Ji-ah’s lips. Regaining her sanity, she chides Lee Yeon on his action, thinking the impulsive kiss is triggered by his first love’s memory.

She asserts that he look at her as the pretty-faced Ji-ah (Jo Bo Ah). Stopping by at the fortune-teller’s room, the eccentric seer drops Ji-ah’s past as a princess which Lee Yeon is aware of. They then head to meet the district magistrate who prepared a “combat welcome” before he can entertain his guests.

Meanwhile, Lee Rang (Kim Bum) also visits the fortune-teller for the tiger’s eyelashes that can see through the past of a person. However, he was tasked to bring something precious in exchange of his request. 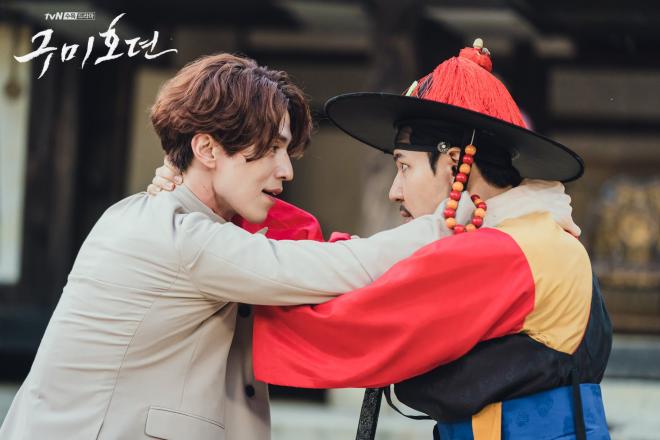 The truth about Ji-ah’s parents vanishing

They learn of a mortal who visited three months before the accident. The district magistrate also reveal that the incident is actually intended for Ji-ah. Warning Lee Yeon, he also revealed that the man mentioned Ji-ah bearing the mark of a King. 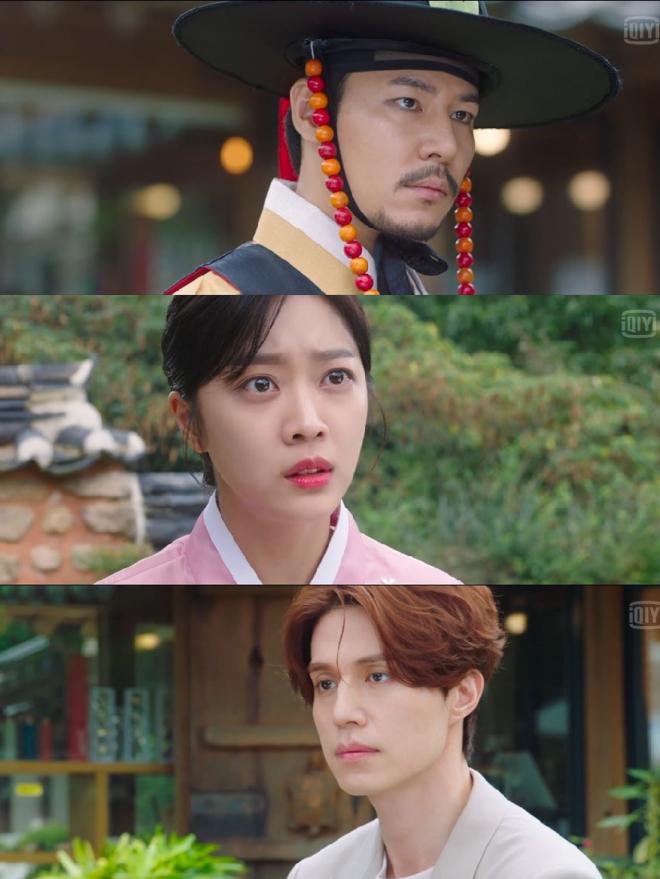 Deliberating his most precious thing, Lee Rang pesters his hyung with incessant calls. They meet at the fortune-teller’s room and Lee Yeon was appraised and claimed by the soothsayer through his deal with Lee Rang.

Crossed on following Lee Rang who would lead them to the human who approached the district magistrate, Ji-ah chooses to rummage on her precious things to save Lee Yeon who was captured inside the fortune-tellers magical bag.

She brings the broken music box which is her parents’ last gift, but it is not deemed worthy to bail Lee Yeon out. Sensing Ji-ah’s special energy, the seer led her to give up the fox marble protecting her.

Freed by Ji-ah, Lee Yeon visits grandma Taluipa and confirms the survival of the imoogi he thought he killed. Ji-ah, on the other hand, connects to the child imoogi in her dream.

With Tale of the Nine Tailed utilizing Korean folklore elements, we keep crossing on mythical creatures as well as traditions from Korean culture. In episode 5, we learned about how in the past, Korea does not give children proper graves so that their parents won’t visit them. It is a sad tradition meant to make the process of moving on for parents easy.

Another mission of this week’s episodes conveyed the “kind” side of Lee Rang. So, yes we still have hope he won’t fully go to the dark side. This series is serving us bitter and sweet bromance featuring Lee brothers as well as Lee Yeon and his loyal Boy Friday – Vet Shin-ju.

So far, Tale of the Nine Tailed has not been wasting its episodes by presenting the plot details to support its projected picture. Swiftly moving, the love story is perched to fascinate and prepare for the approaching surge of conflict.

However, to be honest, I can’t feel the chemistry that needed a thousand years to be fulfilled between Lee Dong Wook and Jo Bo Ah. There’s just a missing nudge somewhere. I don’t know if more lip-locks or intended “sweet moments” can salvage this missing point. Nevertheless, the narrative itself is still enjoyable.

Episode 6 of Tale of the Nine Tailed unearthed important notes we all need to remember as we thread to the culminating part of the series.

Is Ji-ah a horcrux of the imoogi? I have suffered a handful of trauma in “neither will live while the other survives” concept. So, I hope our heroes are equipped enough to battle out the villain.

Because we saw him turning a dead bird back to life. If he will have multiple lives, can Lee Yeon at least summon reinforcement like his past K-Drama supernatural life as a Grim Reaper? And then bring in Goblin if in case the imoogi is too powerful? *wink

Did Lee Yeon’s marble protect Ji-ah on the night she lost her parents? What would happen now since she traded the marble?

Lee Yeon asked the right question to grandma Taluipa on the value of his first love’s sacrifice. I honestly have a lot of questions that I know I have to patiently wait the next episodes to see if it will be answered.

Interestingly, Lee Rang’s precious thing hints on possible redeeming moment for him. He has 10 episodes left to change for the better. I am going to pray for it earnestly.

Tale of the Nine Tailed is swiftly moving not to mention adding hefty details along the way. Make sure to keep a tab on it diligently and take notes too.

It airs every Wednesday and Thursday on tvN.