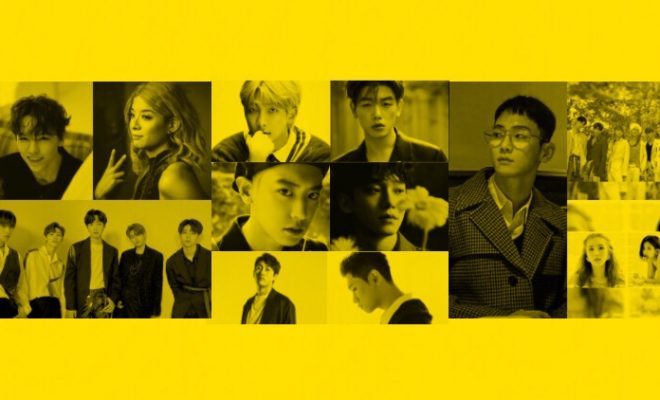 By Prerna Mistry | May 9, 2020
FacebookTwitter
SubscribeGoogleWhatsappPinterestDiggRedditStumbleuponVkWeiboPocketTumblrMailMeneameOdnoklassniki

What happens when music from East meets West? It produces amazing collaborations that merge the styles and sensibilities of two worlds to create nothing but magic!

K-pop has plausibly taken the world by storm and has become a medium to engage people to a new culture.

What’s more is that it has come a long way over the years and has made an impact as a genre in global pop culture. It has led to K-pop acts collaborating with western artists and vice versa.

The fusion of the two worlds results into a dreamlike scenario with some of the most mind blowing music! While you may be aware of certain mainstream K-pop collabs such as BTS with Steve Aoki for “Mic Drop,” “Waste It On Me,” “The Truth Untold”; or MONSTA X with Sebastian Yatra on the recent fuego track “Magnetic,” — here are some K-pop crossover collaborations that you may or may not have come across, but ones that you simply shouldn’t miss out on!

All hail King Namjoon! Fall Out Boy’s track “Champion – Remix,” features BTS’ leader RM, who appears twice in the song, living up to the title of the track, as he raps, ‘I will stay, I will wait and I’ll fight like a king.’

HONNE featured on RM’s soulful track “seoul” from his mixtape, mono. But, RM united with the English electronic music duo on a verse in their track “Crying Over You” rapping, ‘Sh*t happens and we look for the magic/But good things always come to an end,’ showcasing his insightful side.’

RM teamed up with the Kansas rapper for the track “Rush” from his first mixtape, back when he still went by the stage name, Rap Monster. The track has a very laid back energy to it but is packed with a lot of attitude and confidence.

Is it Throwback Thursday already? Because we’re throwing it way back to 2013 when 2NE1 featured on will.i.am’s track “Gettin’ Dumb” – a house meets dubstep track that showcased the K-pop girl group’s lyrically explicit side. They featured alongside artist apl.de.ap on the song.

SHAUN got together with Advanced, Norwegian songstress Julie Bergan and the American DJ KSHMR in the track “My Bad”.  It boasts of a youthful melody that’ll encourages to hit the dance floor.

SHAUN sounds exceptional hitting those high notes with such panache while Bergan synchronizes her vocals to SHAUN’s – which adds an intriguing texture to the overall track.

SHAUN’s debut solo track “Way Back Home,” topped major Korean music charts such as MelOn, Genie, and Olleh Music in 2018 and with good reason. The track is feel good in its approach and SHAUN really takes your breath away with his effortless falsettos while Conor Maynard and Sam Feldt make the song pop with their refreshing twist.

Chanyeol featured on the Far East Movement and Marshmello’s 2016 collaboration track “Freal Luv,” with Tinashe and stunned with his amazing rap style.

CHEN added his own spin in the techno track with his signature high notes and breathy vocals on Alesso’s 2012 song “Years” in 2016 with his Korean and Chinese versions of the same.

Don’t need to take no DNA test to know that this track is THAT track – if you know what we mean! AB6IX fits seamlessly with their Korean and English verses on Lizzo’s chart topping track, “Truth Hurts.”

The track is surprising in more ways than one. It is fascinating to see the group talking about their lives as K-pop idols and dealing with haters with such flamboyance. What’s more is how the two artists, though having differences in musical styles, come together to create such a fun, cohesive track!

tobi lou and Vernon got together for the former’s track “Looped Up,” – a fresh, relaxed track that will give you all those chill vibes! And it is one that’d you’re sure you’d be playing on repeat!

Featuring on FYKE’s track “Get Myself,” Amber Liu mesmerizes with her elevated vocals. FYKE is known for making tracks related to mental health and “Get Myself,” ventures just into that giving an insight into anxiety and the emotions one undergoes when going through the same.

Here, Amber takes a much breezy route as compared to the former on SUPERFRUIT’s “Fantasy.” It is evident in the lyrics and the MV of the track itself that project brighter images to go with the overall cheery aesthetic of the song.

Soyeon and Miyeon featured on a track for the game Leagues of Legends. The track features Madison Beer and Jaira Burns and is titled, “POP/STARS.” This is one power track that you simply shouldn’t miss out on!

Soyeon featured on yet another Leagues of Legends track titled, “GIANTS,” alongside Becky G, Keke Palmer, True Damage, Duckwrth and Thutmose. Soyeon goes straight for the kill with her insanely dynamic rap verse and tries her hand at Spanish lines with Becky G as well.

VAV really make you go ‘wow,’ with “Give Me More.” Teaming up with De La Ghetto and Play-N-Skillz. The track has a very tropical feel to it that is sure to make you sway to its ambient guitar tunes and dance beats.

Crush and Garibay come together to create a wonder. “Lay Your Head On Me” projects such beautiful romance through its serene guitar based arrangement that is sure to melt your hearts.

The former Sistar member featured on Far East Movement’s “Umbrella,” that gives you a surreal feeling with its bright yet nostalgic style of arrangement which complements Hyolyn’s musical style. This one’s a treat for the ears for sure!

Key featured on the Korean remix of the British pop trio, Years & Years’ track “If You’re Over Me.” The synth pop track is a take on a toxic relationship without clarity. Appropriately, Key’s Korean verses reflect the very theme of the track as he sings, ‘The daily, repeating mistakes/Your words that stop mine/Fate is a lie/Oh it’s so cruel/ If your heart is done/Let’s end this tedious situation and let me go.’

“Idea Of You,” is a very introspective track amidst a very upbeat arrangement. While the composition is more house meets EDM, Eric Nam comes in with his breathy falsettos asking, ‘do I miss you? Or do I miss the idea of you..’ which makes the track quite interesting overall.

The K-pop star features on a version of Loote’s “Your Side Of The Bed,” which is a peppy, cheeky love song that expresses the feeling of moving on. Eric Nam sounds suave as ever on this number and the arrangement of guitar riffs, synths and bass give the song it’s zest.

The tropical track “Into You,” really brings a very sophisticated flair to Eric’s vocals. The prominent saxophone in the chorus is just enough to add the extra oomph in the song.

Wendy featured on “Written In The Stars,” with John Legend. The song is aptly titled as it is truly a collab that was written in the stars for the amount of romance that fills each line and melody.

The track’s low-key groove and symphonic melody are reminiscent of a 90’s R&B style that will surely having you swooning to it’s rhythm.