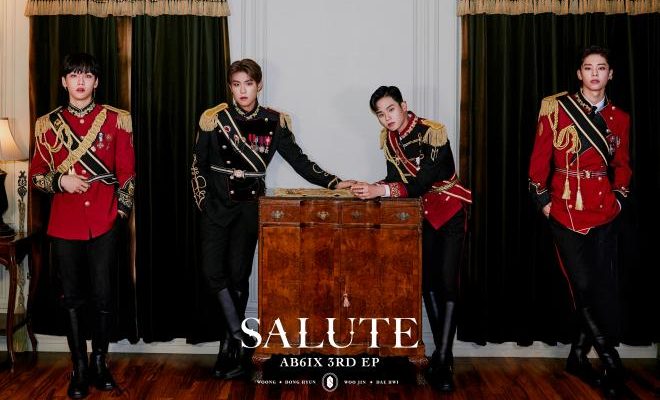 In this comeback, the group captures the regal concept of princes with a military background. When they pose together they give off a charismatic aura, which feels like a royal family portrait.

The physical album of the EP comes in two versions which are Royal and Loyal.

Reeling an intriguing statement, the group featured in royal attire only showing off their wardrobe and not their faces. Moreover, the text on the image reveals the title of the album SALUTE, which goes with their look as the outfits are part of the British military Royal uniform. 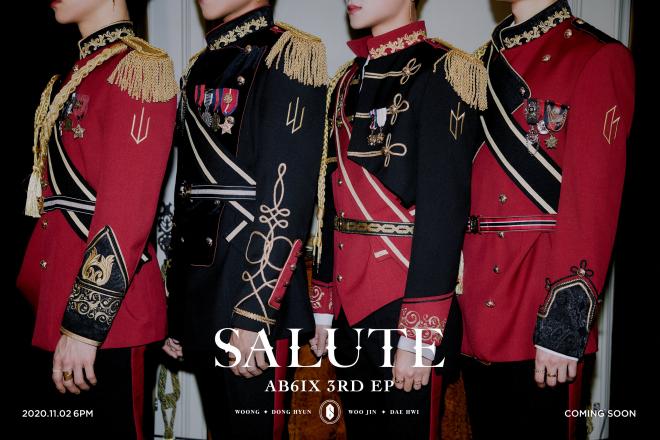 Additionally, AB6IX has also released various promotional content for SALUTE, to hype their fans. From October 16 to November 1, they promoted their EP through various teasers for SALUTE.

Unveiling their schedule for their November return, they gave a peek at what to expect in their latest release. Garbed in Versace for the tracklist teaser, they presented “Mirror”, “SALUTE”, “Heaven”, “Maybe”, “Bloom”, and “Behind You” as their latest songs to anticipate.

Piquing interest, AB6IX was also featured as modern royals in the cover art for their album. It also contains a photo from the group’s first concept photoshoot, where the members are in royal military attire.

AB6IX had also disclosed a PR Event, which will be an open video call for their fans ABNEW. Their fans would apply for the video call event which would have many benefits. 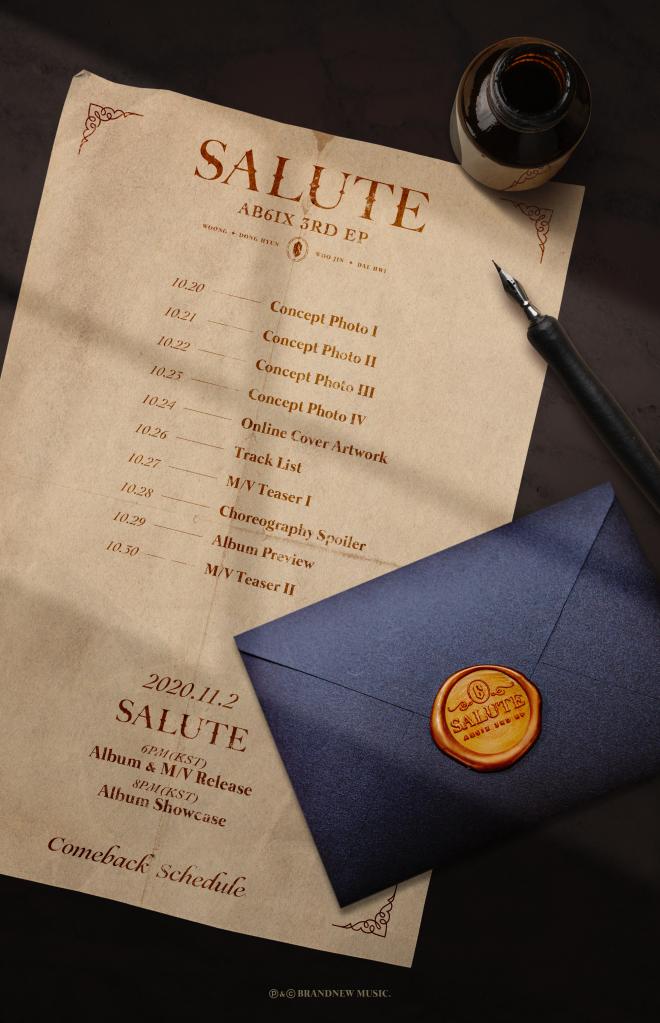 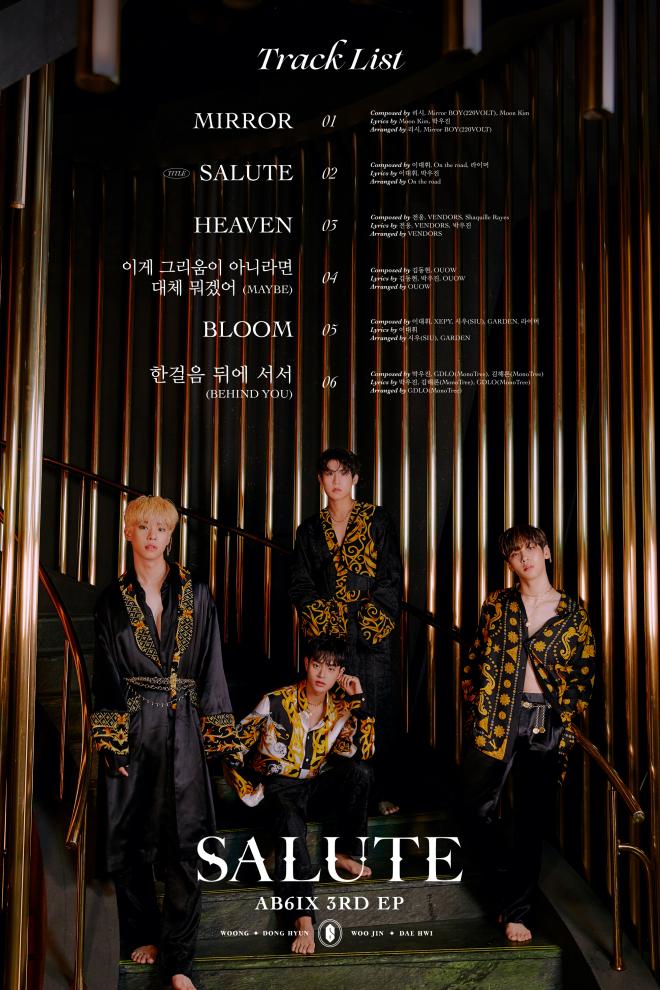 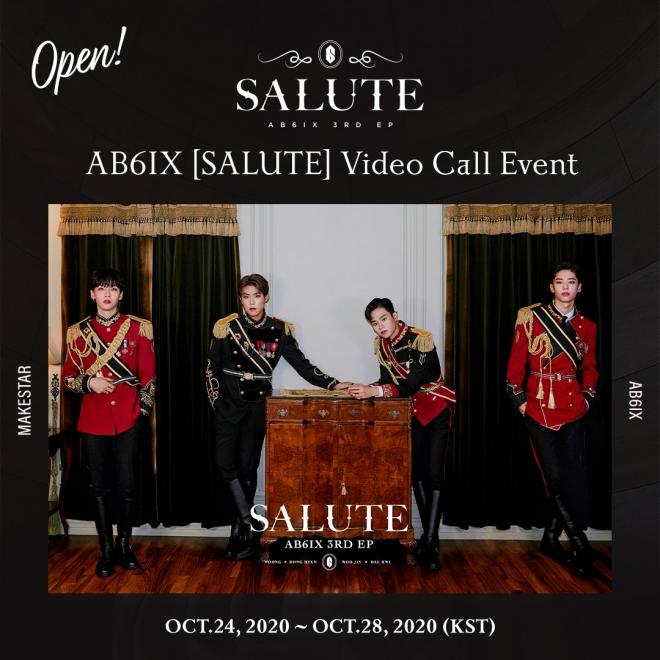 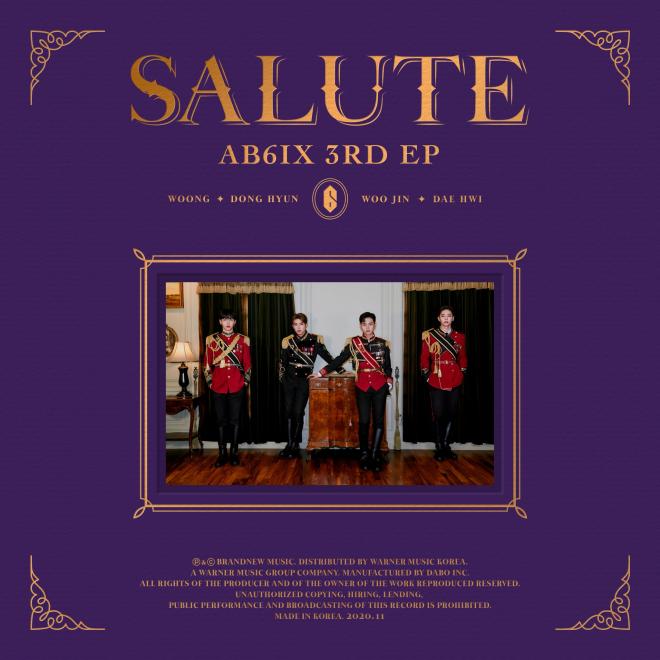 Aligning to their “royal theme”, the members are featured in aesthetically imagined video complete with marching band vibe.

AB6IX also interacted with their fans through V Live, talking about their new EP and music video SALUTE.

In the Official Preview for their EP, it hinted at various power anthems and ballads as well.

Teaser #2 hyped up the anticipation as members were shown in various outfits and power dance moves. While at the same time, the choreography spoiler showed a clip of the group’s choreography from “SALUTE”.

Moreover, the concept photos of the members looking every bit of aristocrats were revealed from October 20 to October 23.

The first concept photo was inspired by the royal military attire of the British, where they were dressed in the uniforms and the royal color of red.

A vintage theme was added to the second concept photo, where you could feel as if you went back in time. The boys adorned newsboy hats, pocket watches, lapel pins, ties, and suits in shades of brown.

AB6IX wore Versace inspired outfits, in the third concept photo which exuded a regal vibe. The color theme of the outfits was mainly white, gold, and black.

In the last concept photo, the members were wearing marching band attire, in the royal colors of blue and silver. 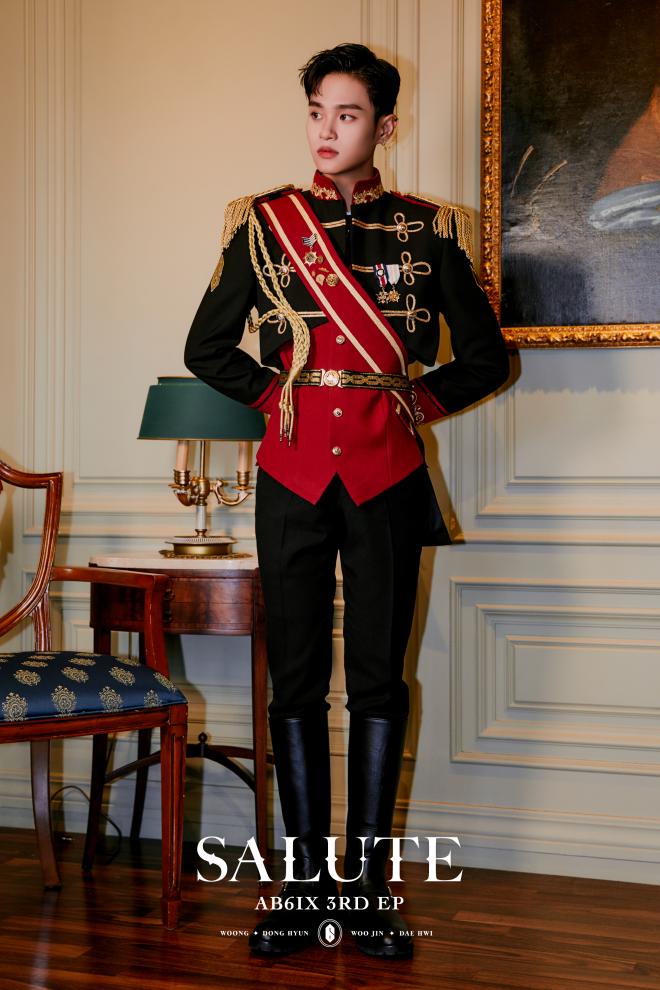 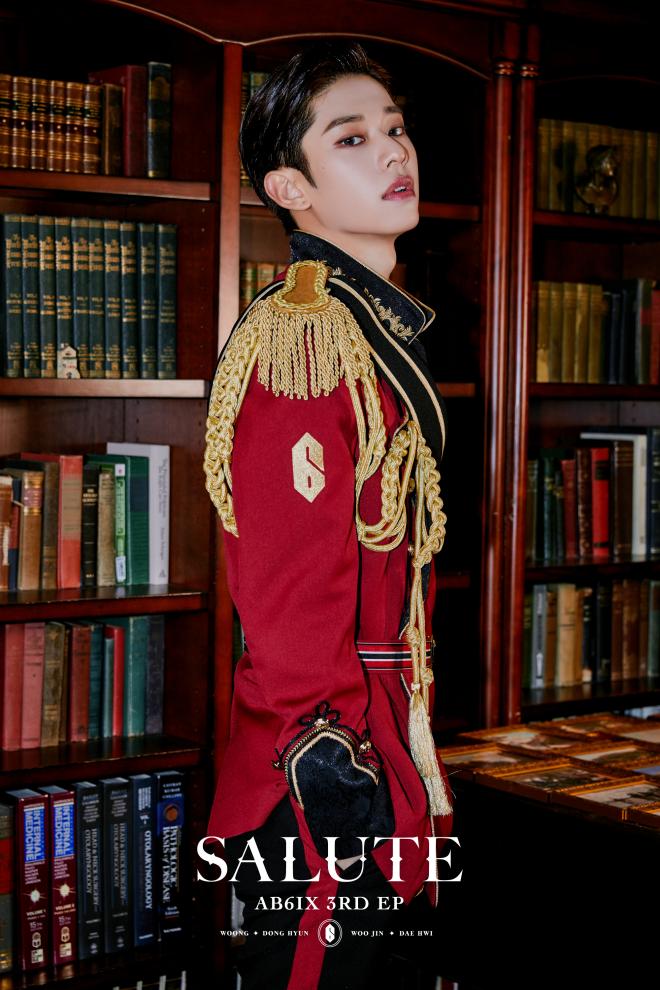 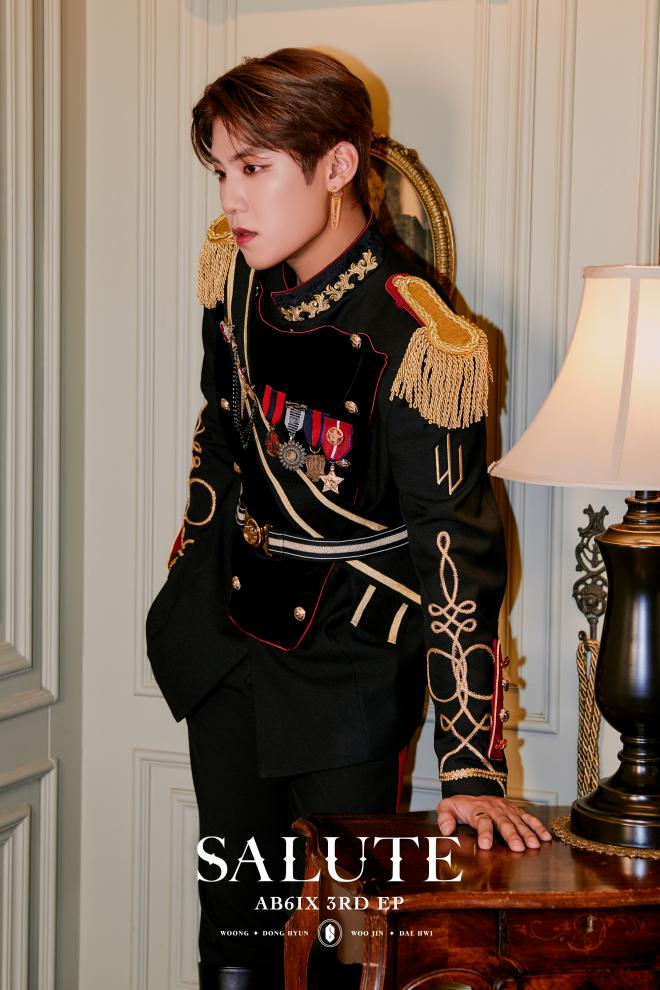 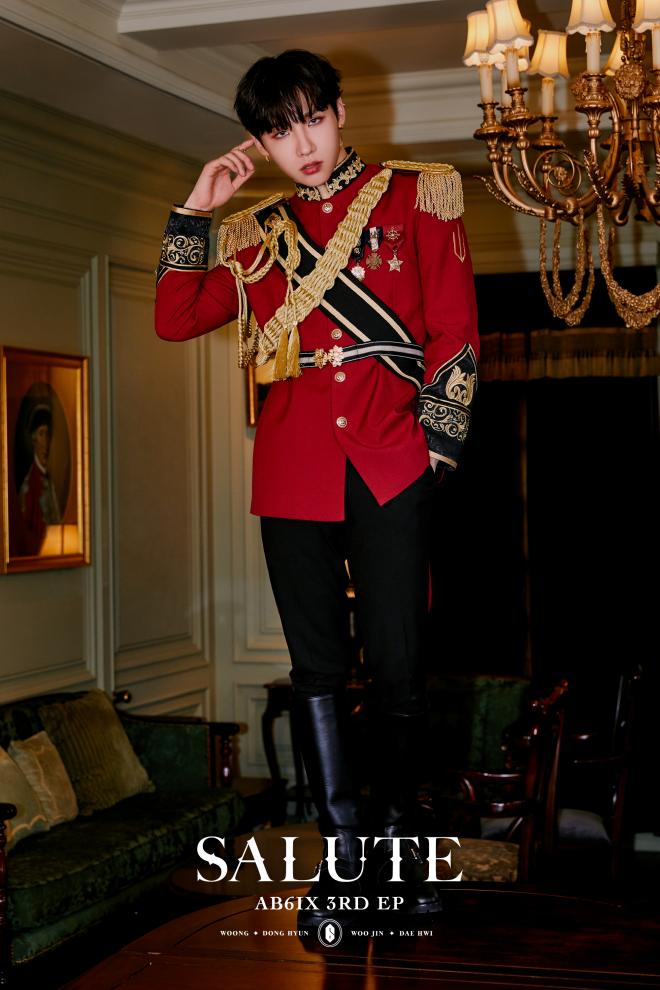 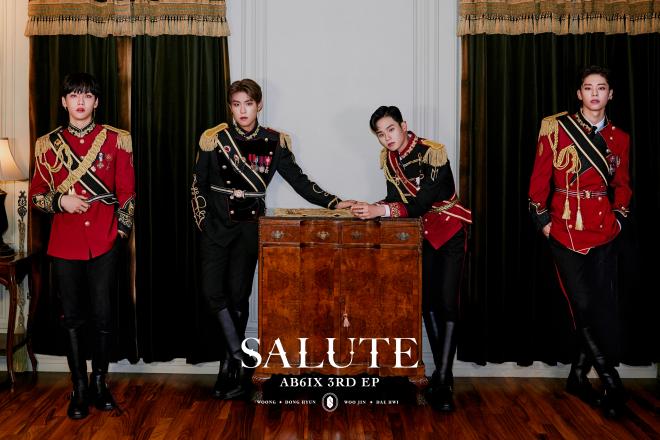 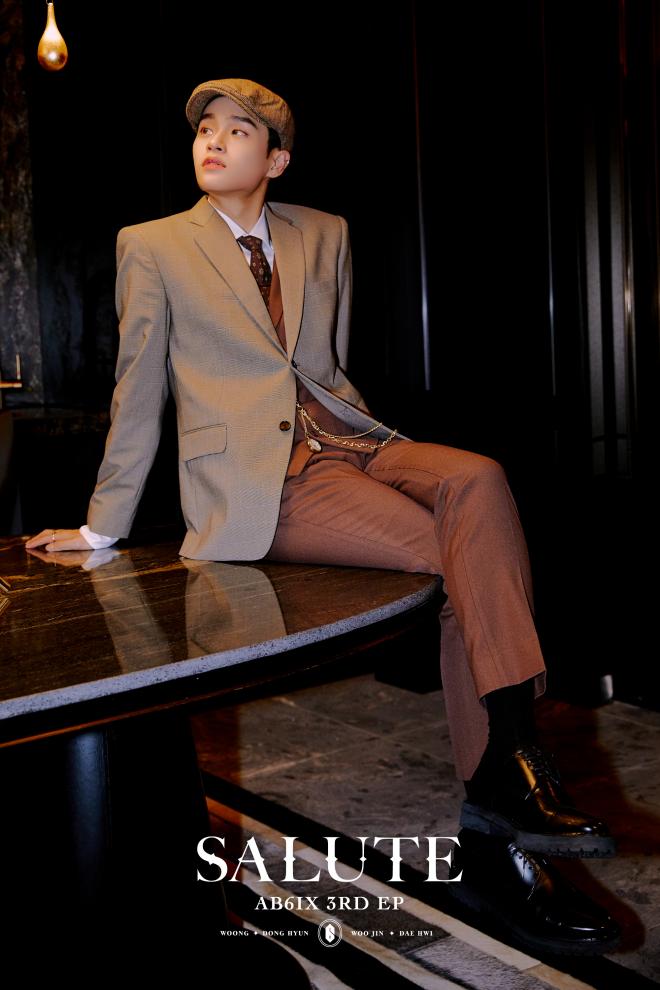 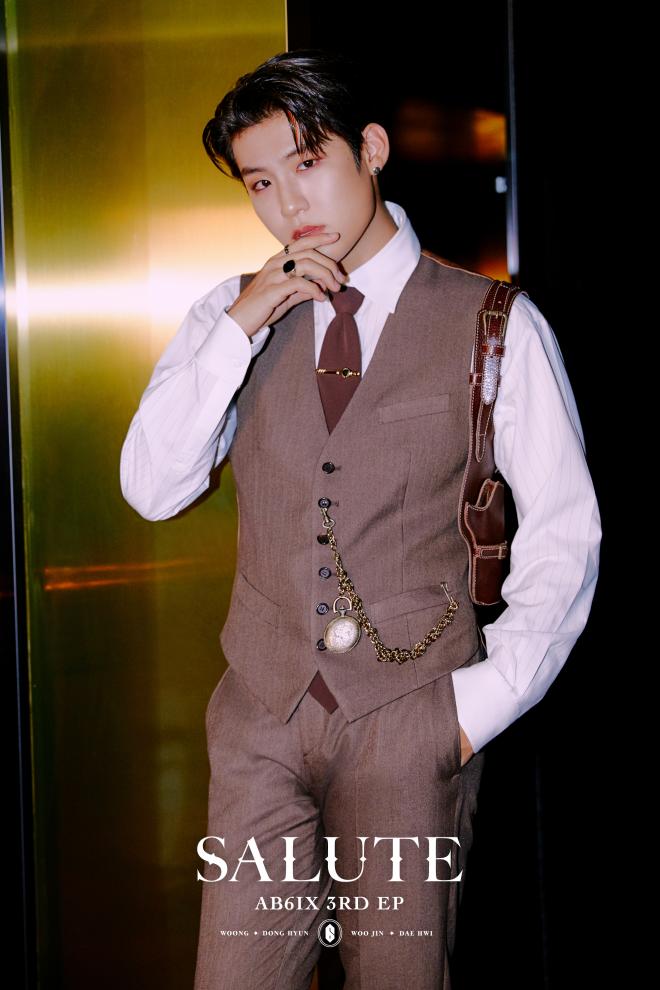 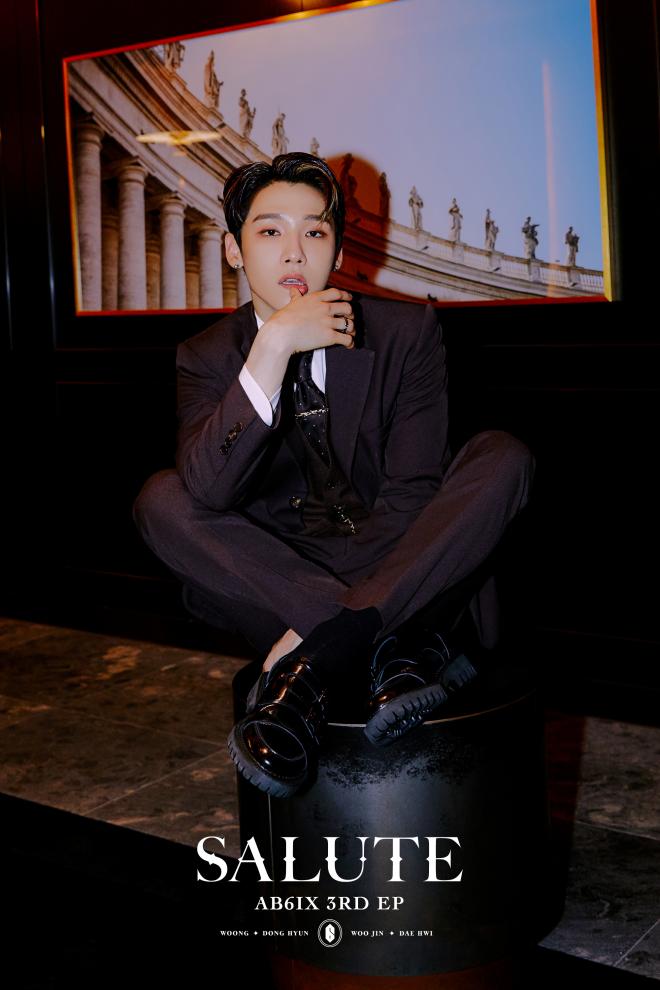 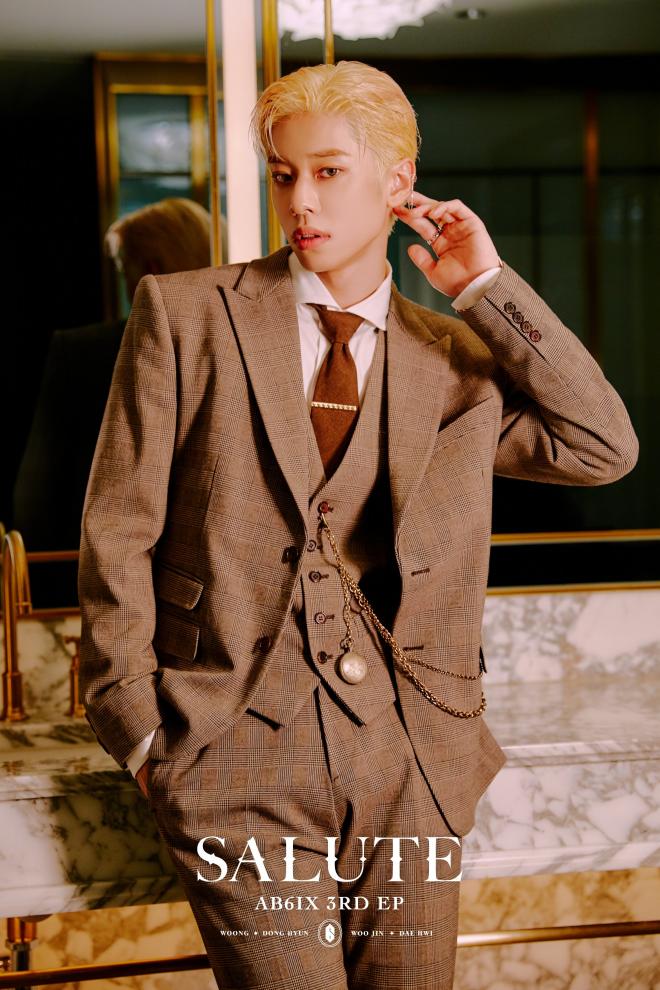 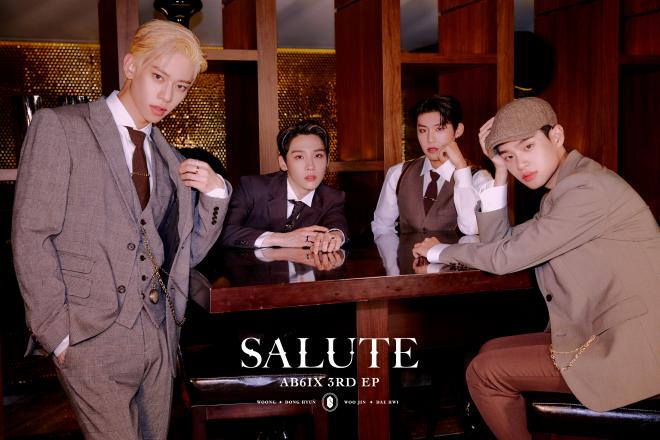 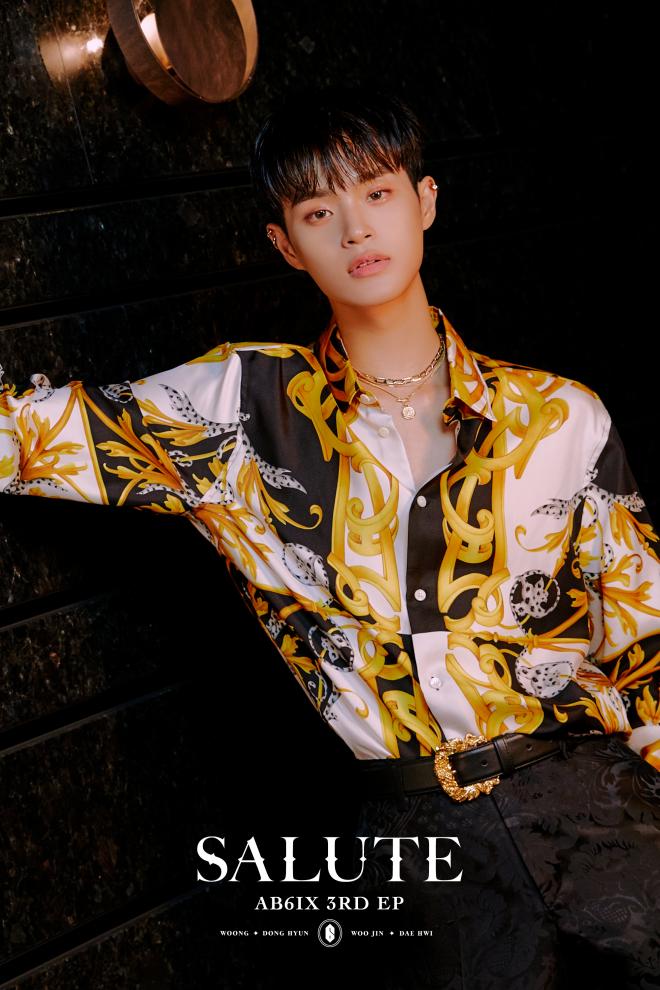 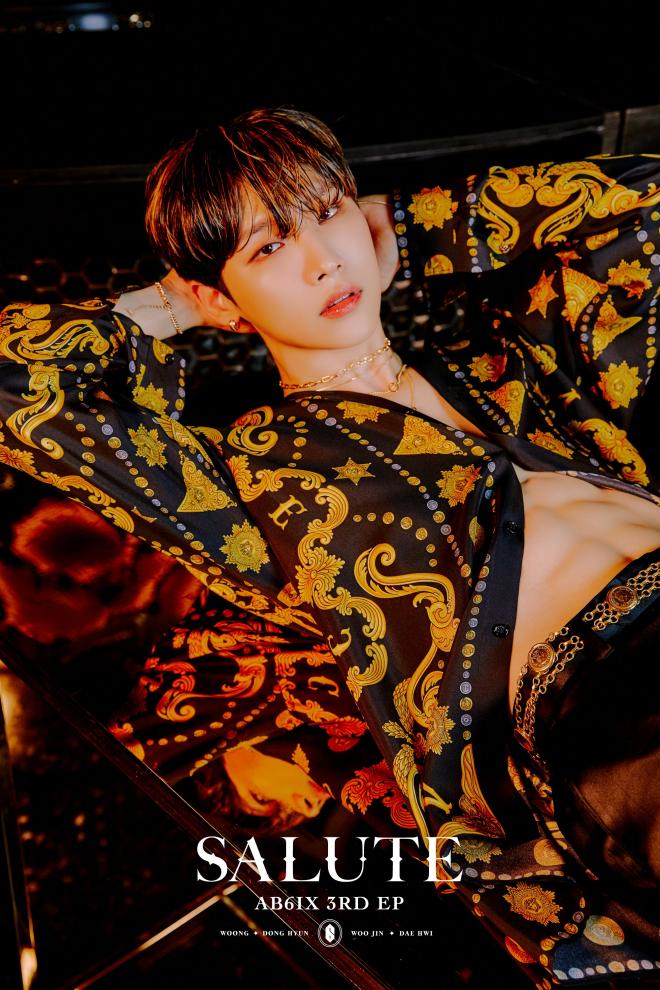 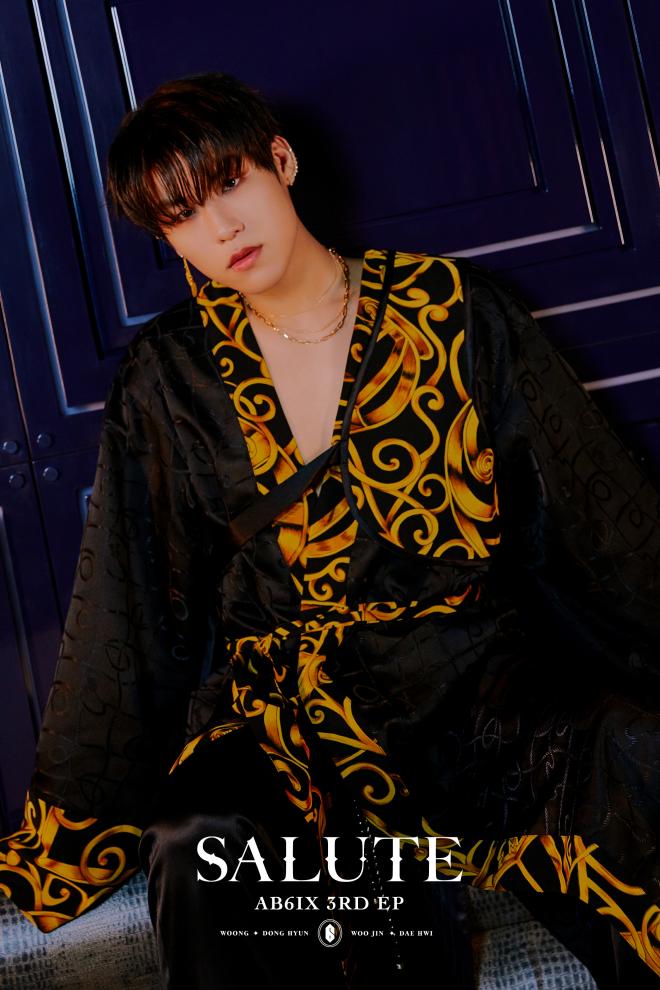 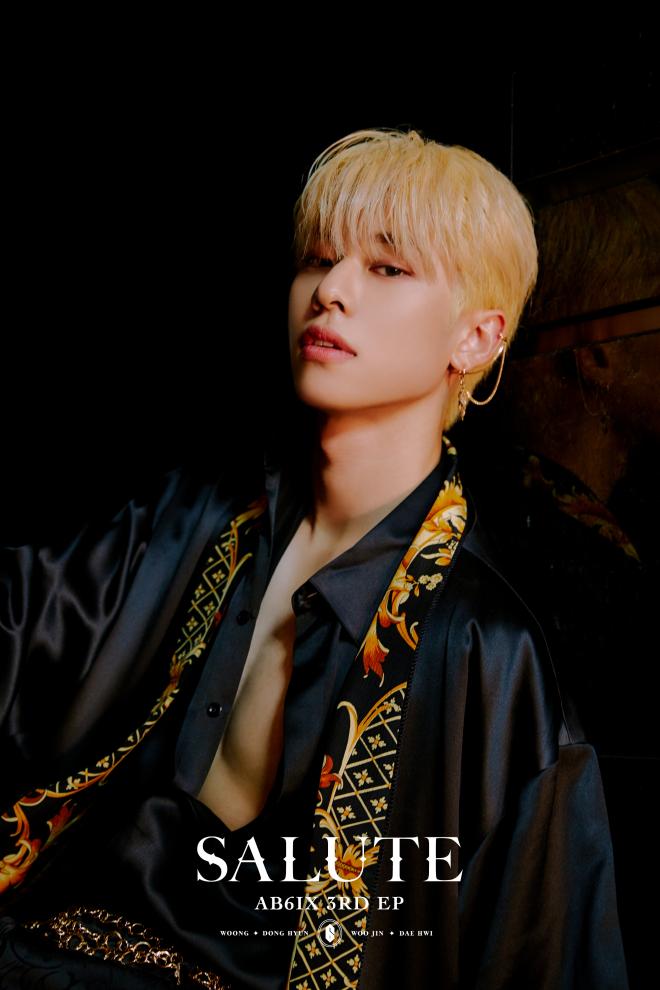 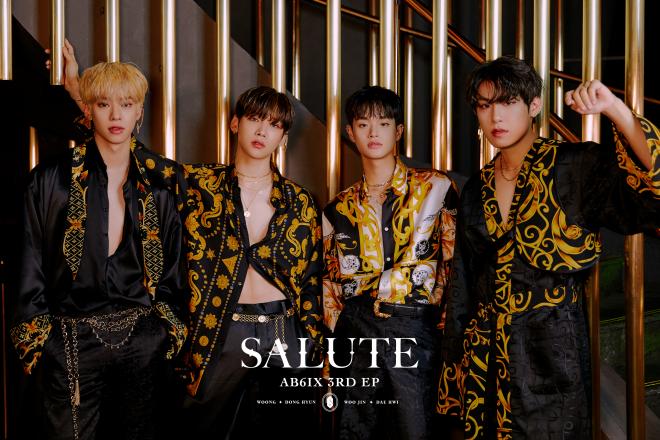 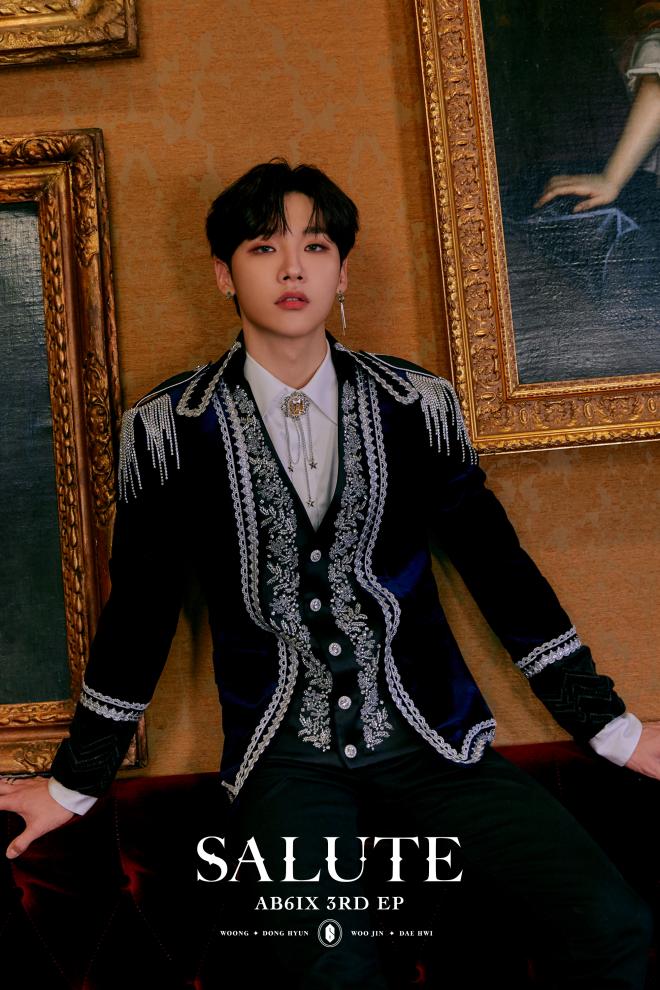 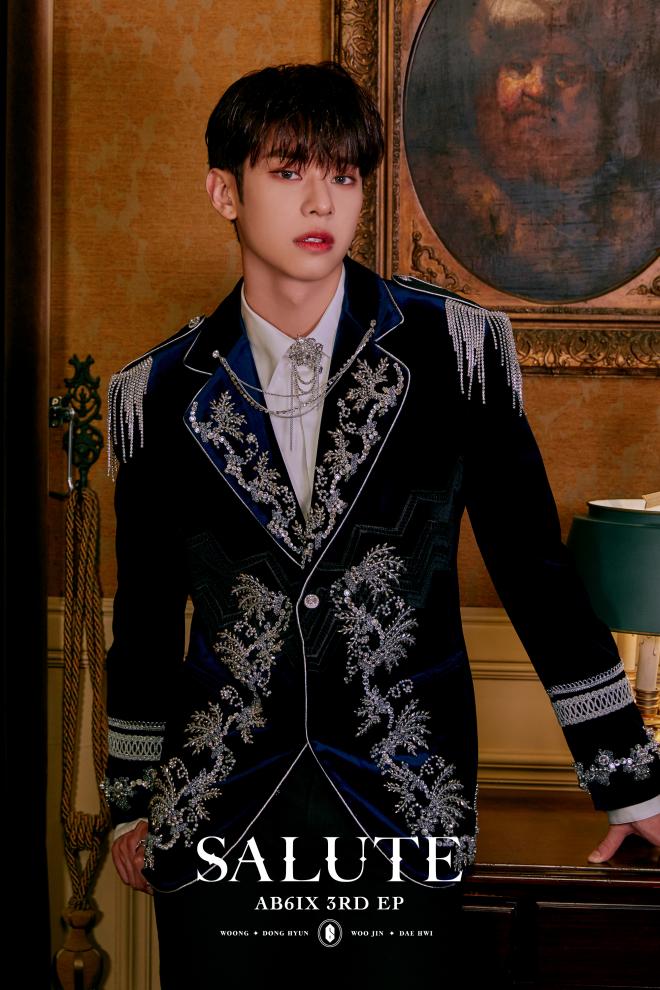 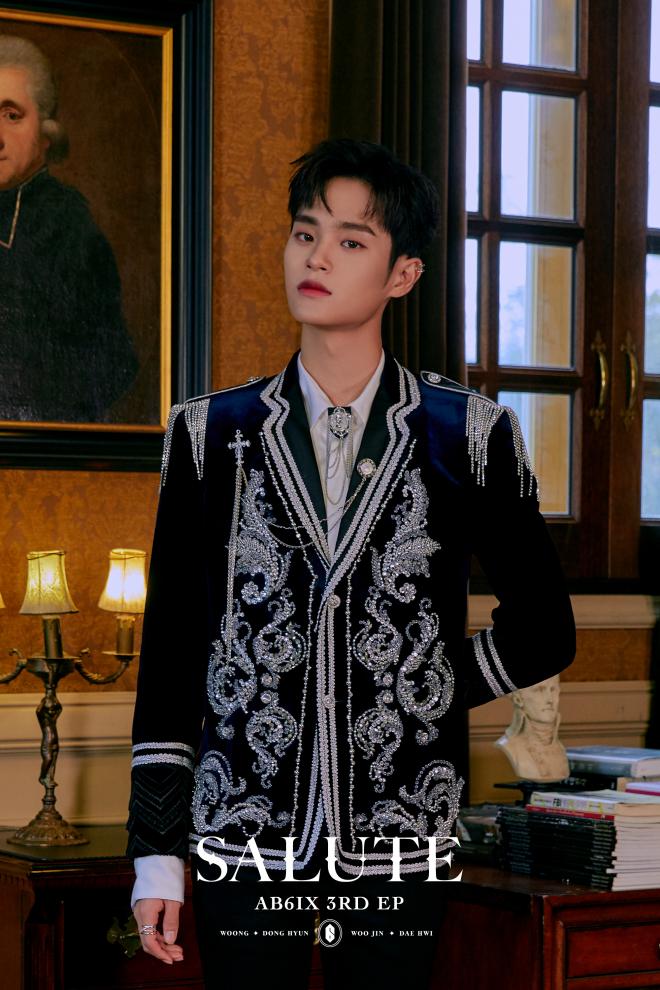 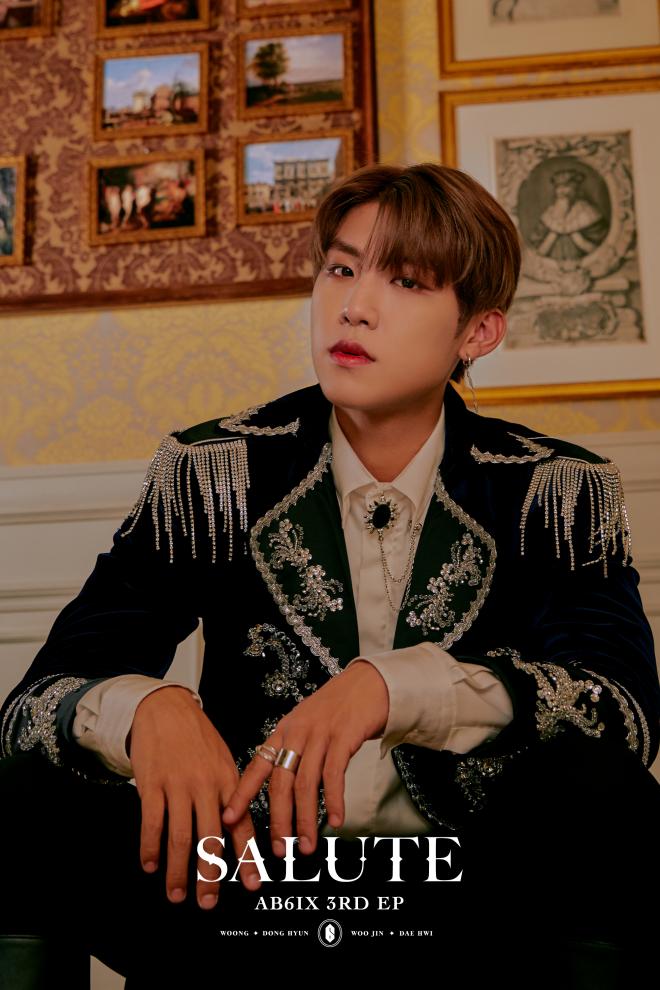 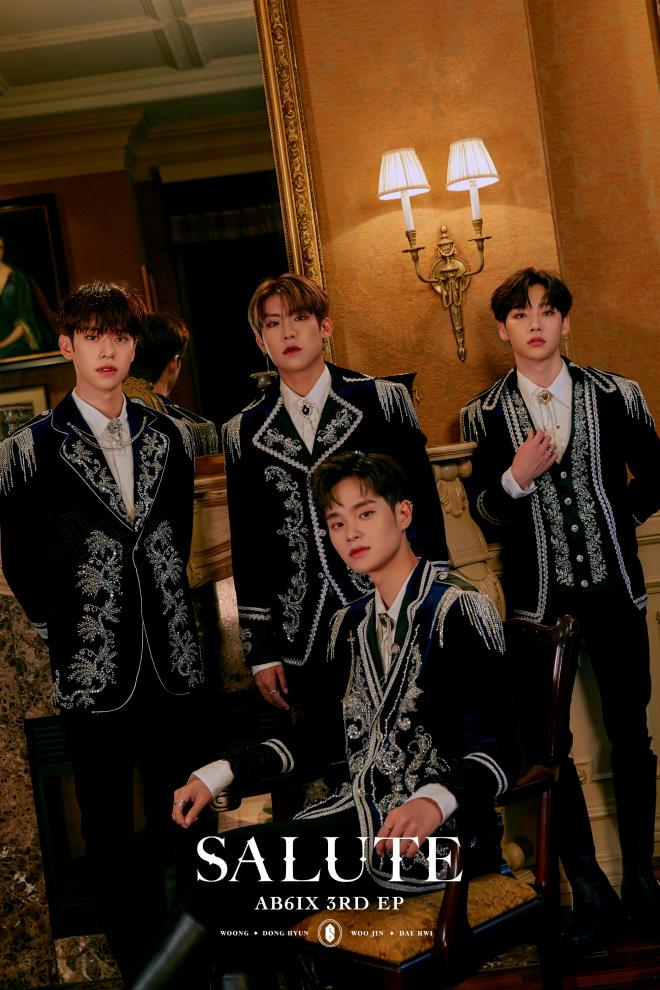 Starting off SALUTE with a rich presentation is “MIRROR” which mixed with great vocals, EDM, and synth all in one track. The song has intense feelings of self-reflection and seeking for your loved one. It is an upbeat track right from the start and was co-written by Park Woo Jin.

Next up is the title track “SALUTE”, the song has various theatrical instrumentals that go well with the concept of the album. Throughout the song the delivery of lyrics and vocals were incredible, the most special part was when Dae Hwi raps in the song. This hip hop track is composed by Lee Dae Hwi, On the Road, and Rhymer. In addition, The lyrics on the other hand were written by Lee Dae Hwi and Park Woo Jin.

“HEAVEN” mellows it down with its soft and melodic vocals. The arrangement of this song is emotional, which mixes well with the vocals. This sentimental track is all about farewells, to someone you loved.

Park Woo Jin and Kim Dong Hyun co-wrote “MAYBE” which is a pop track with an R&B inspired vibe. The flow and the hook are what is outstanding in the track, which is an easy listen with clean vocals. Additionally, the song conveys the longing of a loved one, who is no longer around you.

“BLOOM” is a deep house track, it contains the whistling sound effect on the track which created a mysterious feel and brought together the whole song. As a whole, this track has a chill EDM inspired vibe. Moreover, Lee Dae Hwi took part in the composition and writing of this song.

To finish off the album is “BEHIND YOU” with a lovely piano solo and wholesome vocals. This song has beautiful layering and rap delivery was soft and heartfelt. With a stunning orchestration take over in this song, it is a clean end for this SALUTE.

“SALUTE” represents a new chapter for AB6IX, where they portrayed their royal and regal concept. Sporting nobility in their decorated military-like outfits, it matched with their fierce performance.

AB6IX performed the choreography with such ferocity, that it matched their concept exceptionally. Above all, they really exuded powerful energy especially in their military-like transition to get into the formation during the chorus and the entire ending-sequence.

The music video opens up with a spectacular marching band sequence that hypes up the song. The introductory sequence matched up with the brass-heavy chorus nicely, both working hand-in-hand with the members’ epic vibes. The theatrics they had used mixed with the simplicity of “SALUTE“. It further emphasized on “Come and get me. Come get it” repetition.

Through their choreography they conveyed the story, about expressing a grand sort of feeling, equating the feeling of love as much as the feeling of when fighting for one’s country. When Kim Dong Hyun is in a scene fighting with a robotic machine, the lyrics “Even if I fall, I get up again”, this symbolizes the concept of never giving up. This concept is further highlighted with the lyrics “Only yes allowed in here” and “The only way is to say yes.”

Additionally, the lyrics “Dyed with red light” symbolizes the feeling of passion, which is used a lot in the music video. A member walks down where we can see his shadow in “red light” which symbolizes how he is overpowered by passion.

Moreover, Dae Hwi’s rapping was a standout moment in the song, which was a follow up for the chorus. Subsequently, SALUTE ends in a reverberating note when the final chorus changes up and is mixed with EDM and synth for their finale.

Aiming for music supremacy, AB6IX achieved that and more in their latest music.