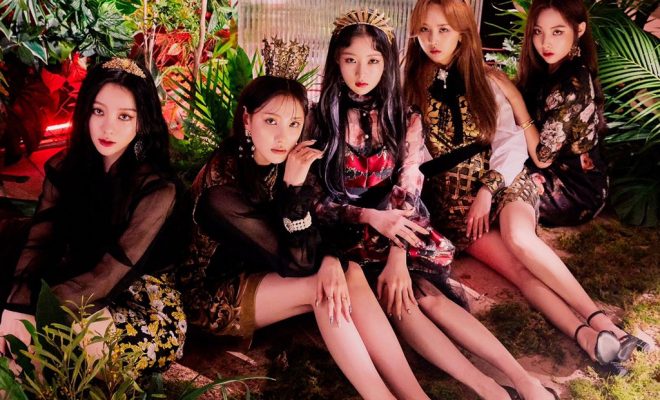 BVNDIT (Be Ambitious and Do It) made a return after a year and released their 2nd mini-album Carnival on May 13. The album displays the group’s overflowing confidence as they grow and rise as singers.

On April 28, BVNDIT announced the comeback date for the upcoming album through their official Twitter account. They posted an image of a tropical green forest reflecting the theme of the album. 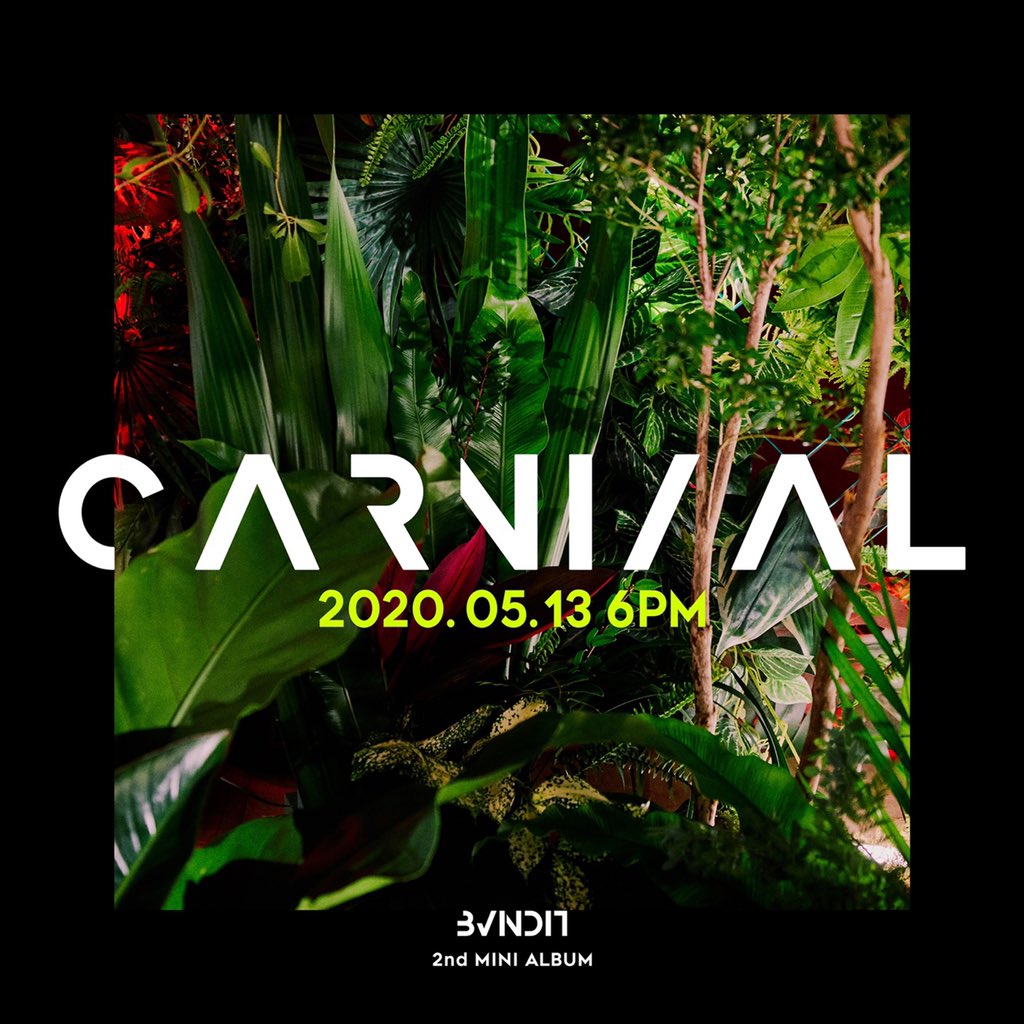 Subsequently, the group dropped the comeback scheduler for the album. 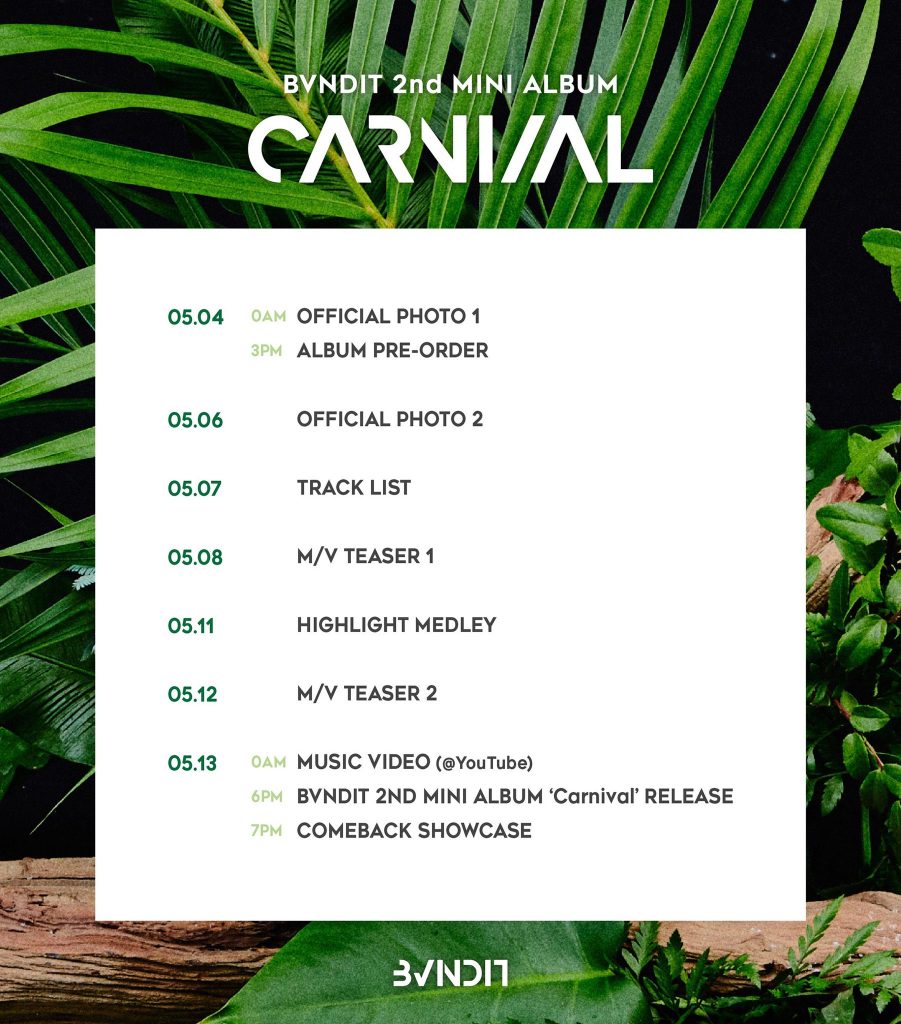 Then, on May 4, BVNDIT revealed their first teaser photos. The group shines as queens with their black outfits and gleaming crowns. Their eyes are fierce, depicting strong women in the midst of a tropical background.

They shared the group as well as individual photos of each member (from left to right): Seungeun, Yiyeon, Simyeong, Jungwoo, and Songhee. 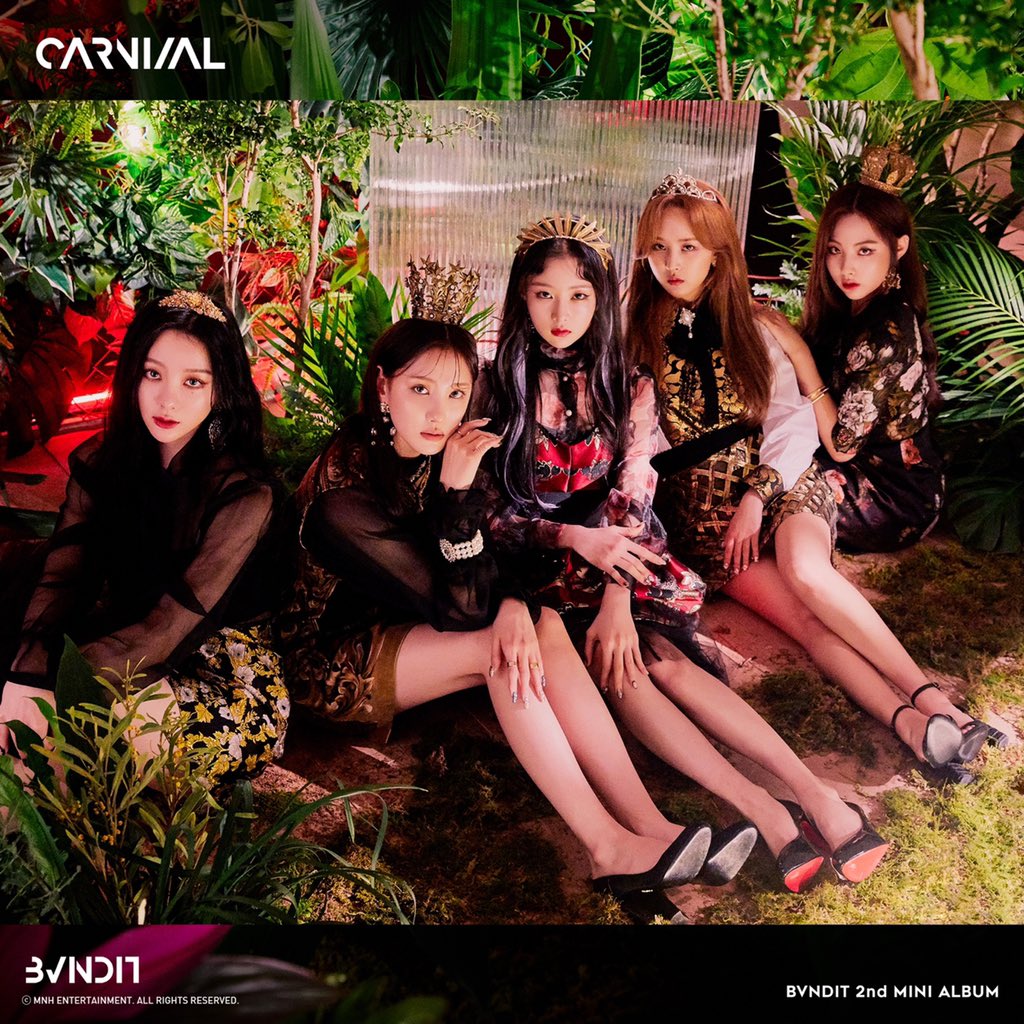 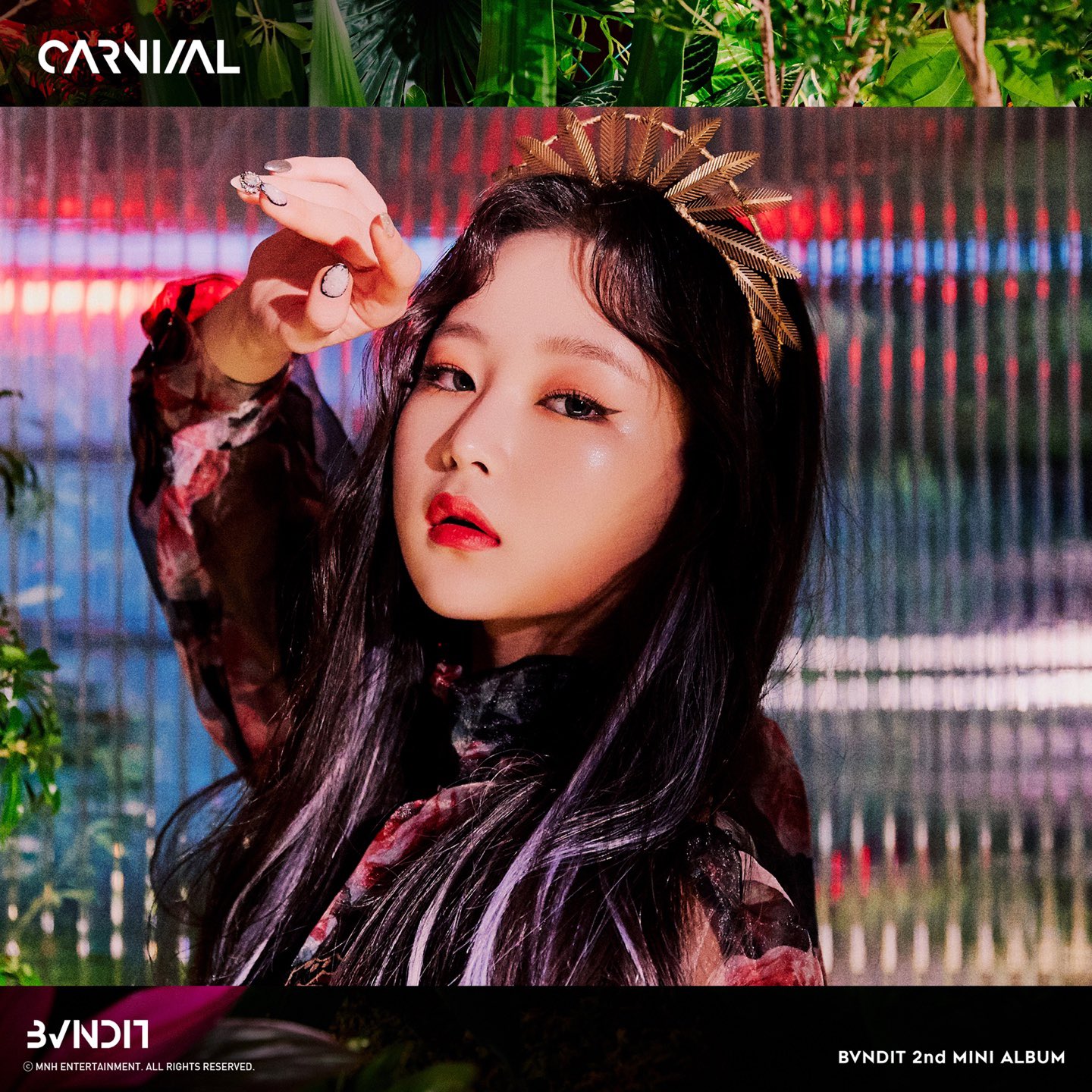 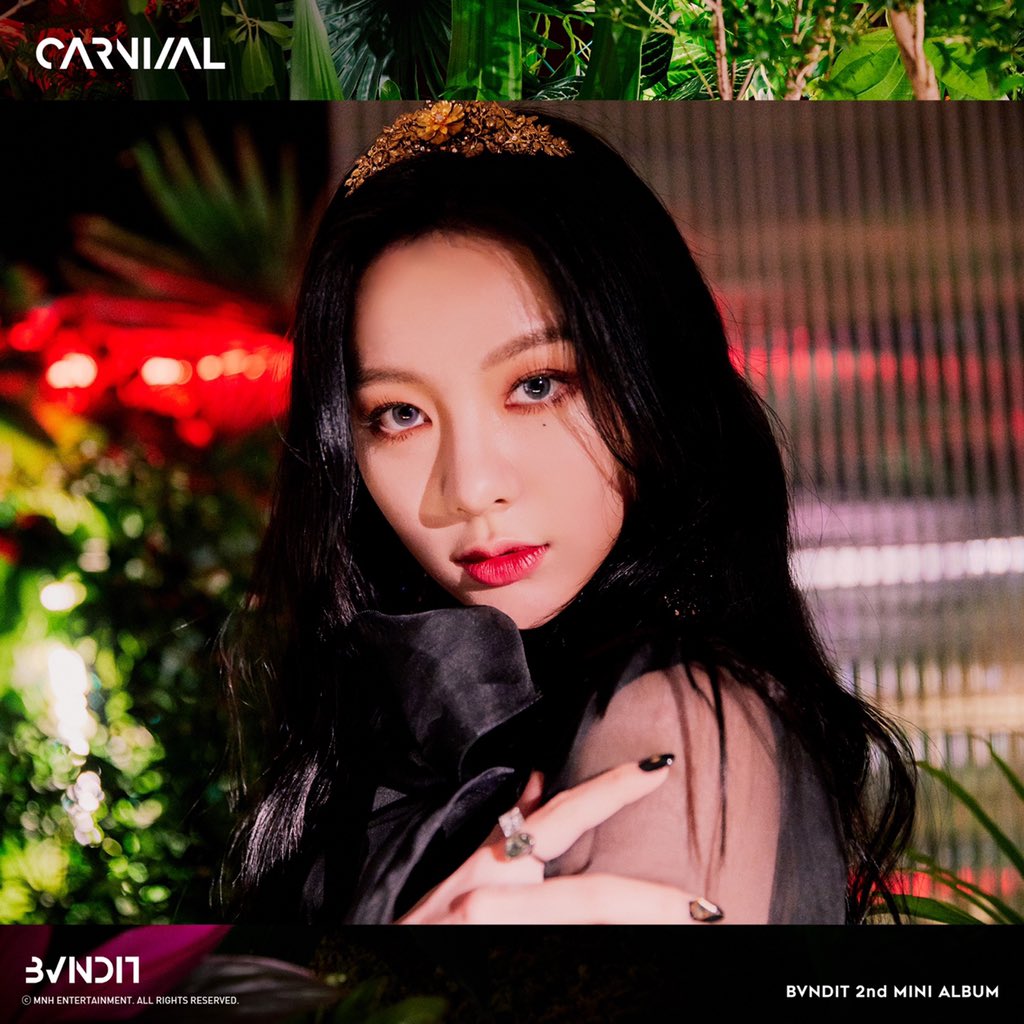 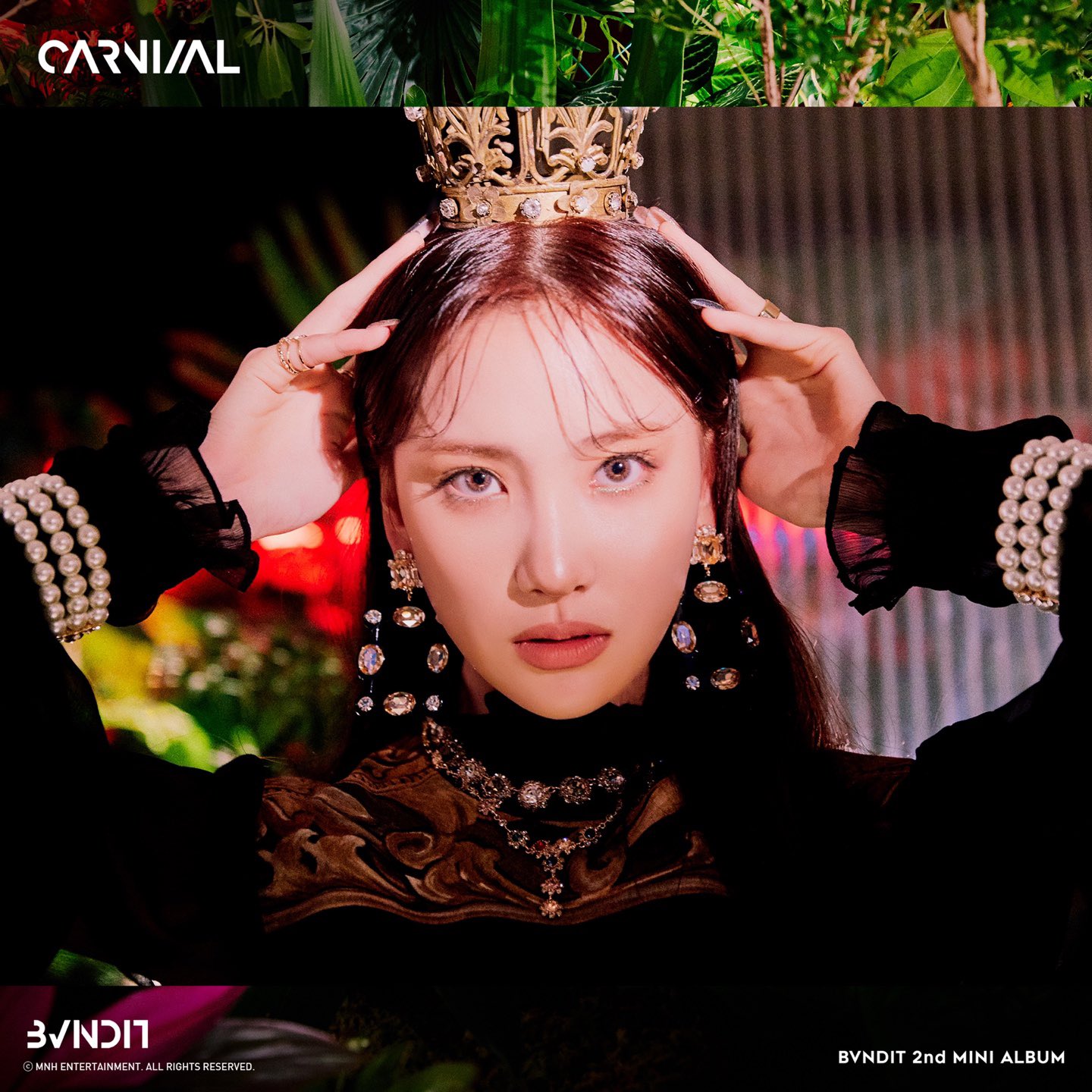 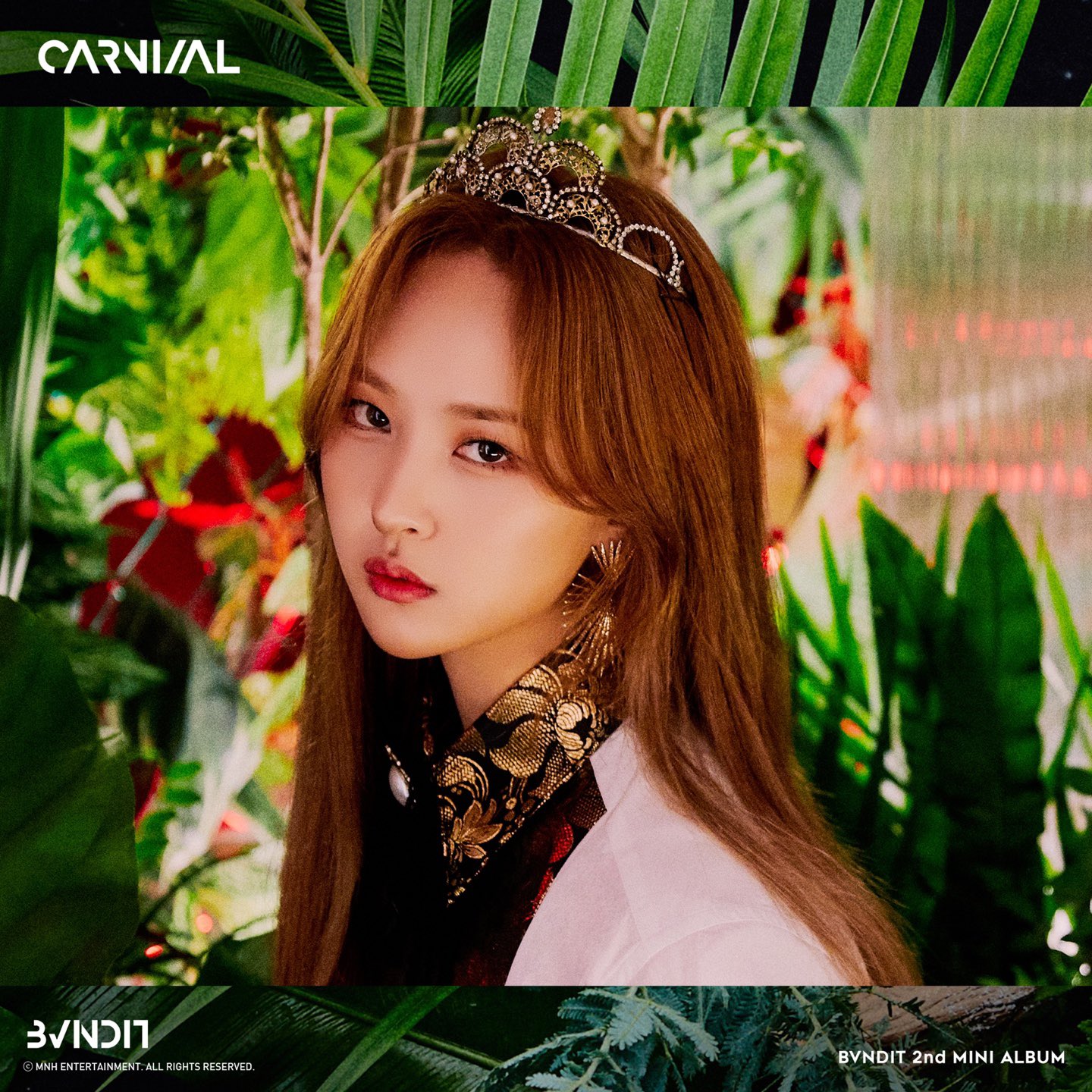 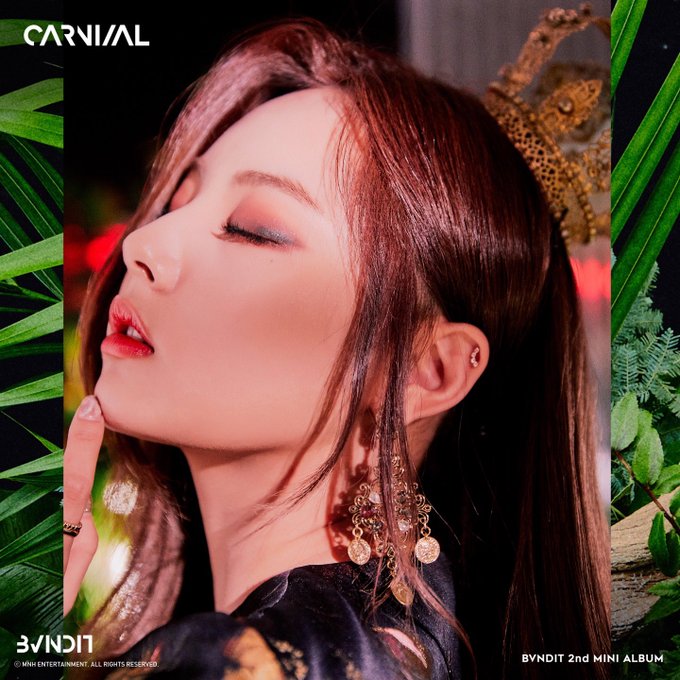 On the same day, BVNDIT posted the pre-order details for the Carnival album.

After that, on May 6, BVNDIT unveiled the second set of teaser images for Carnival. This time, the group shot displays the artists in bold green and black outfits paired with a flashy golden jewelry. The singers still hold their fiery gaze. Like early teasers, individual images were shared as well. 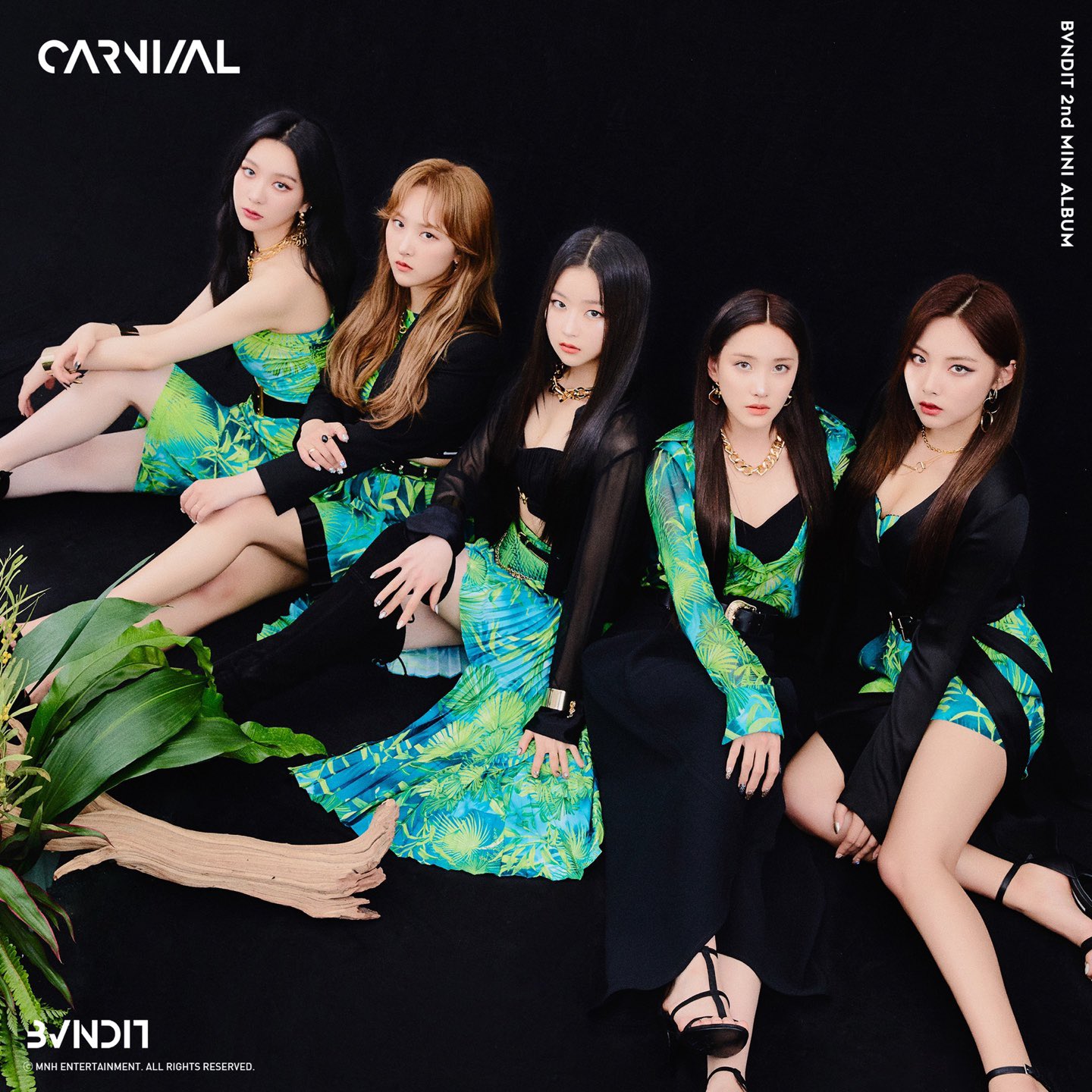 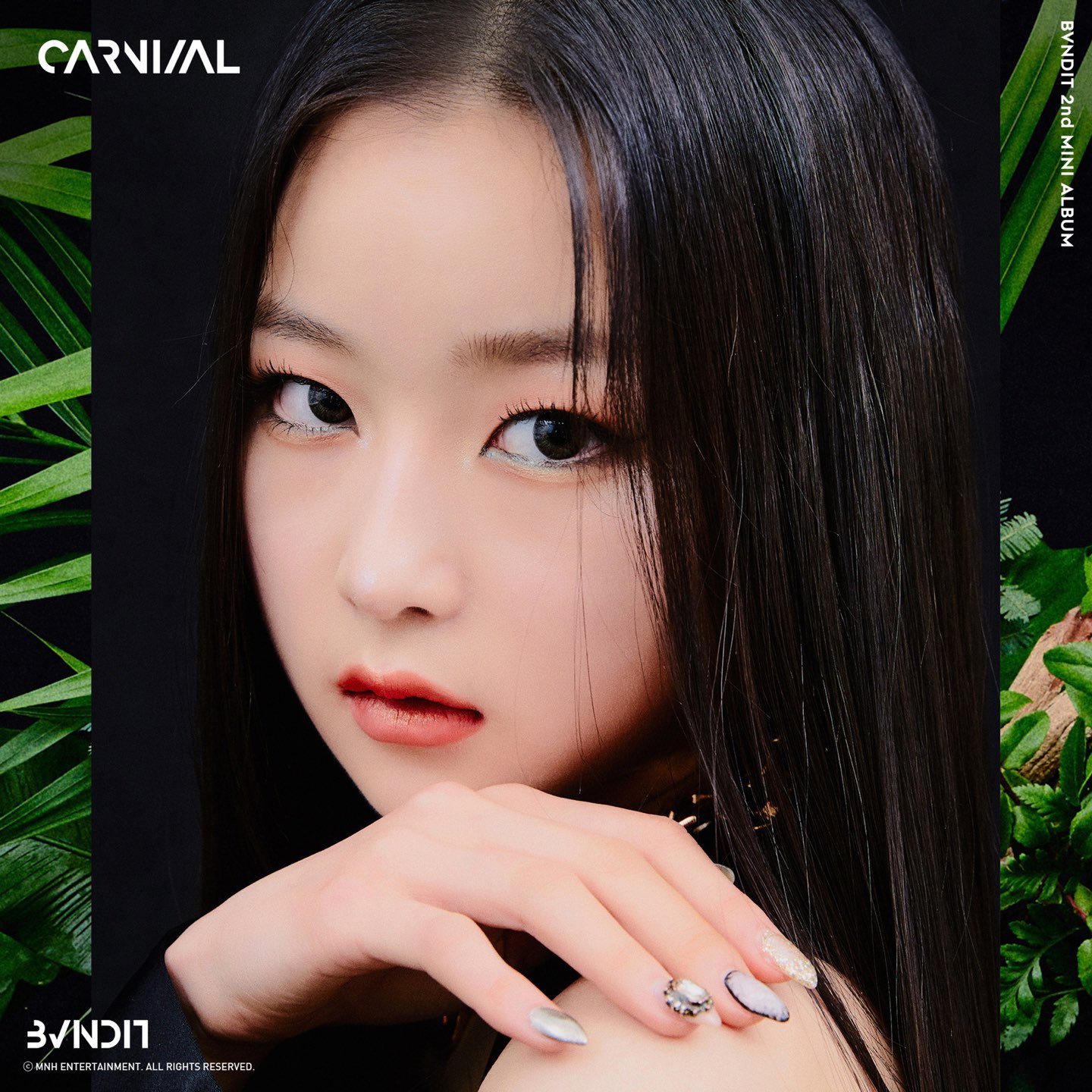 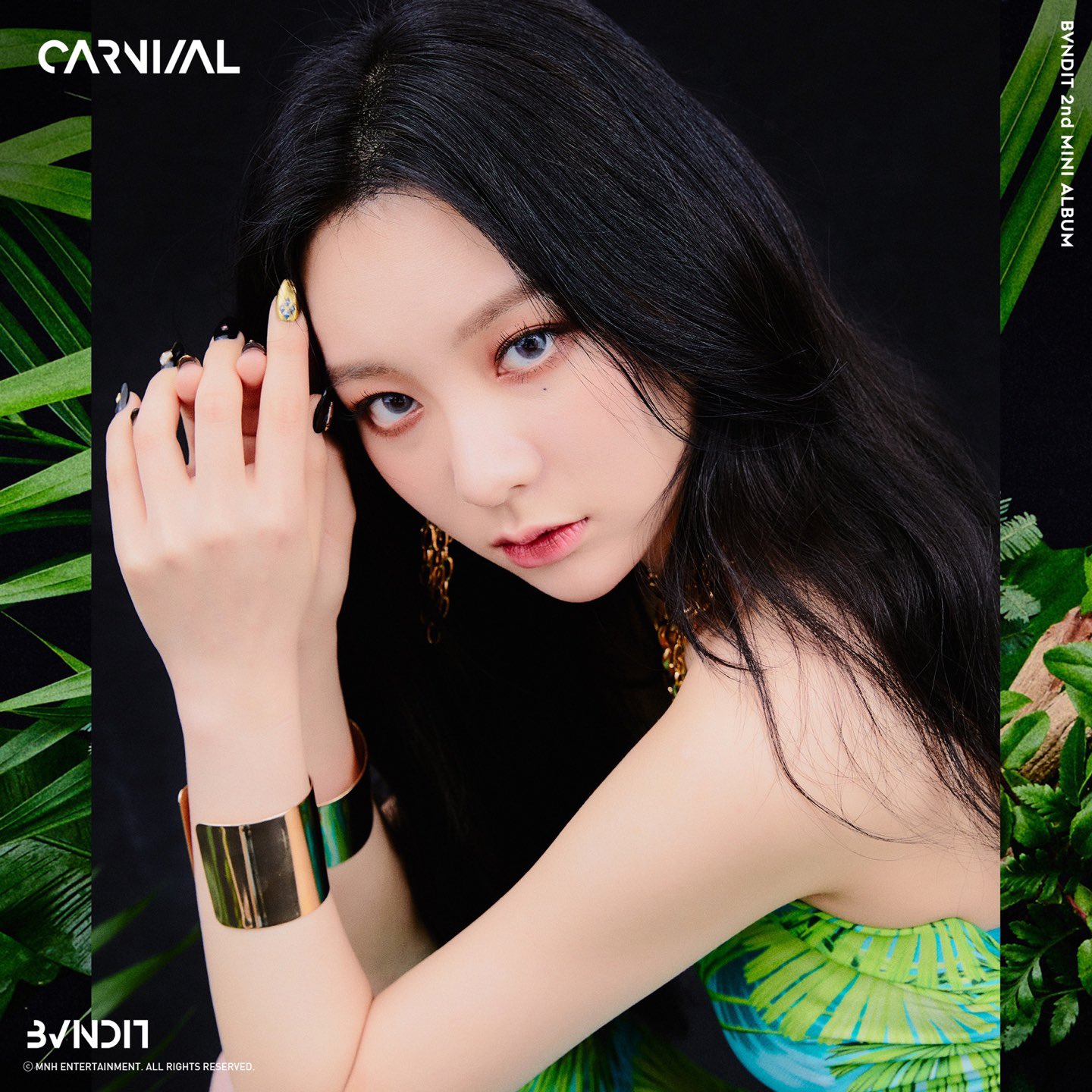 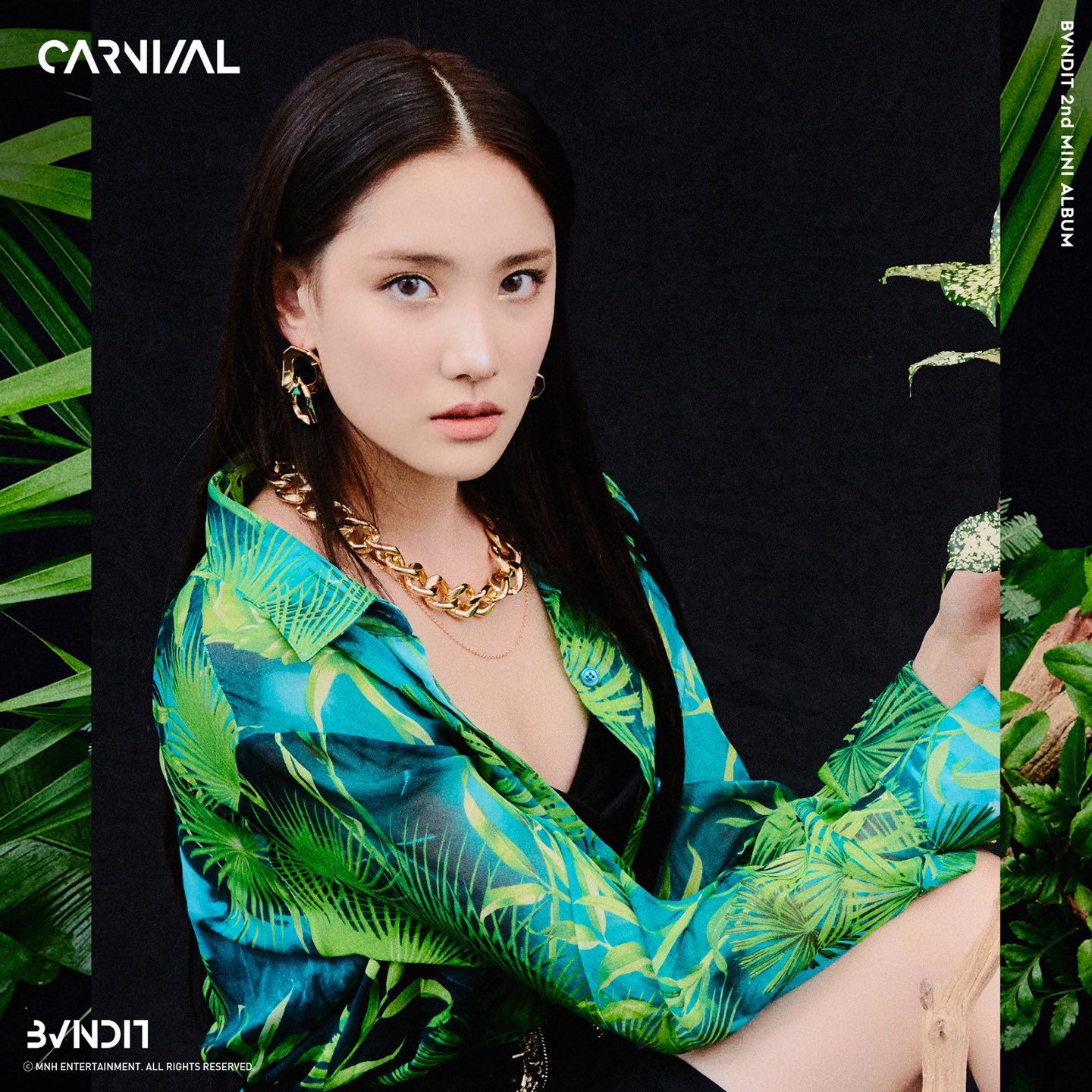 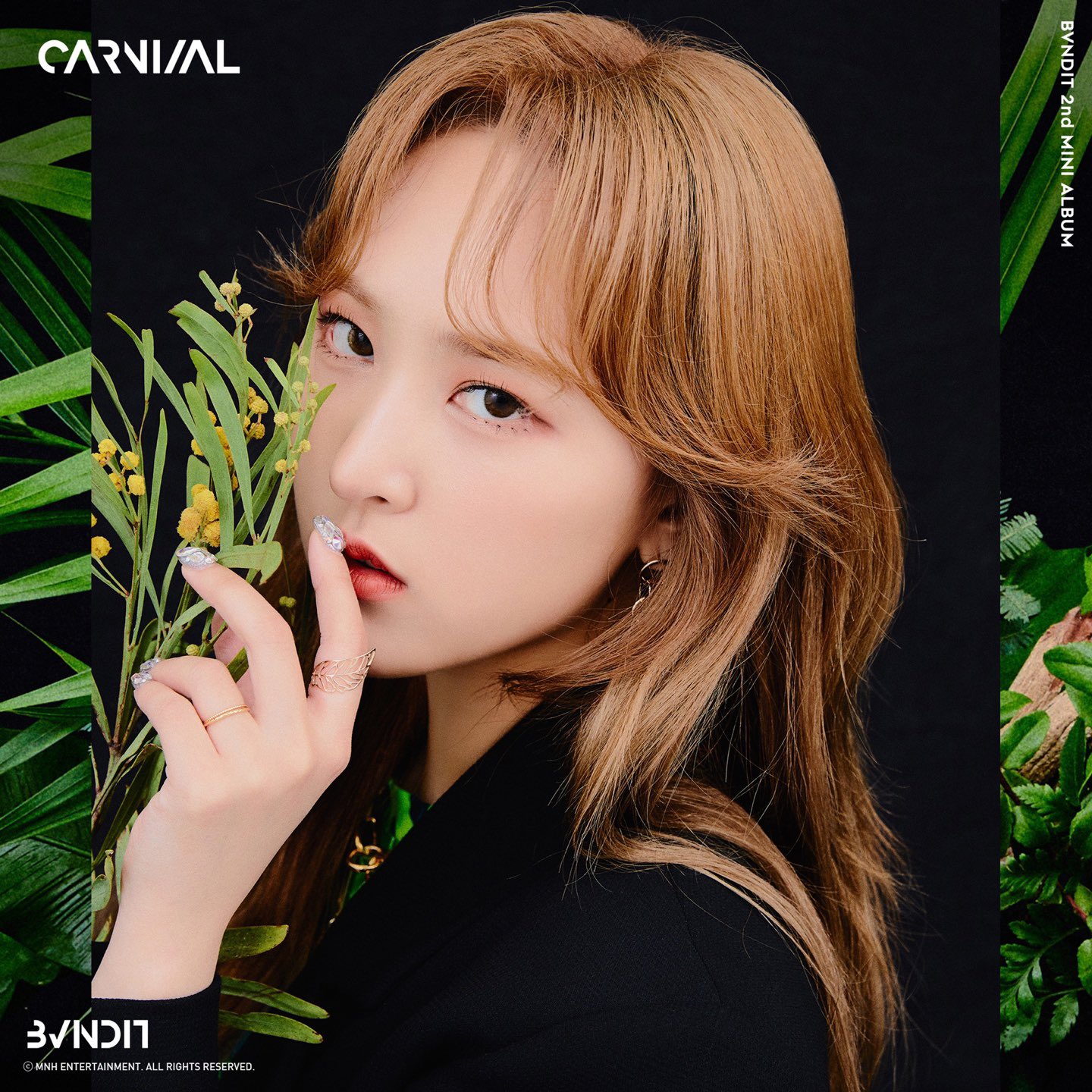 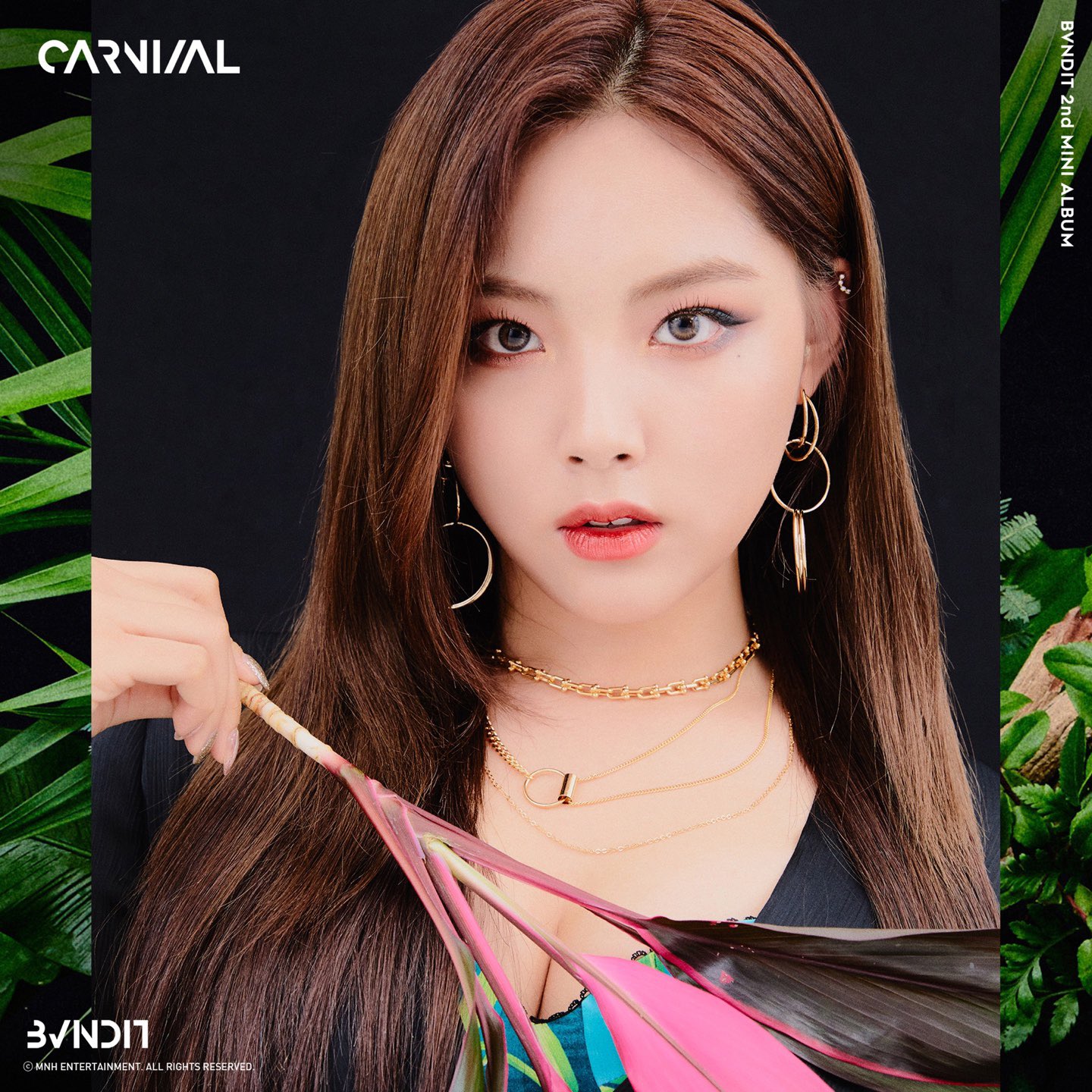 The next day, BVNDIT disclosed the tracklist of their second mini-album Carnival through their Twitter account which includes “Jungle” as the title track. The other tracks are “Carnival,” “Come and Get It,” “Cool,” and “Children.” 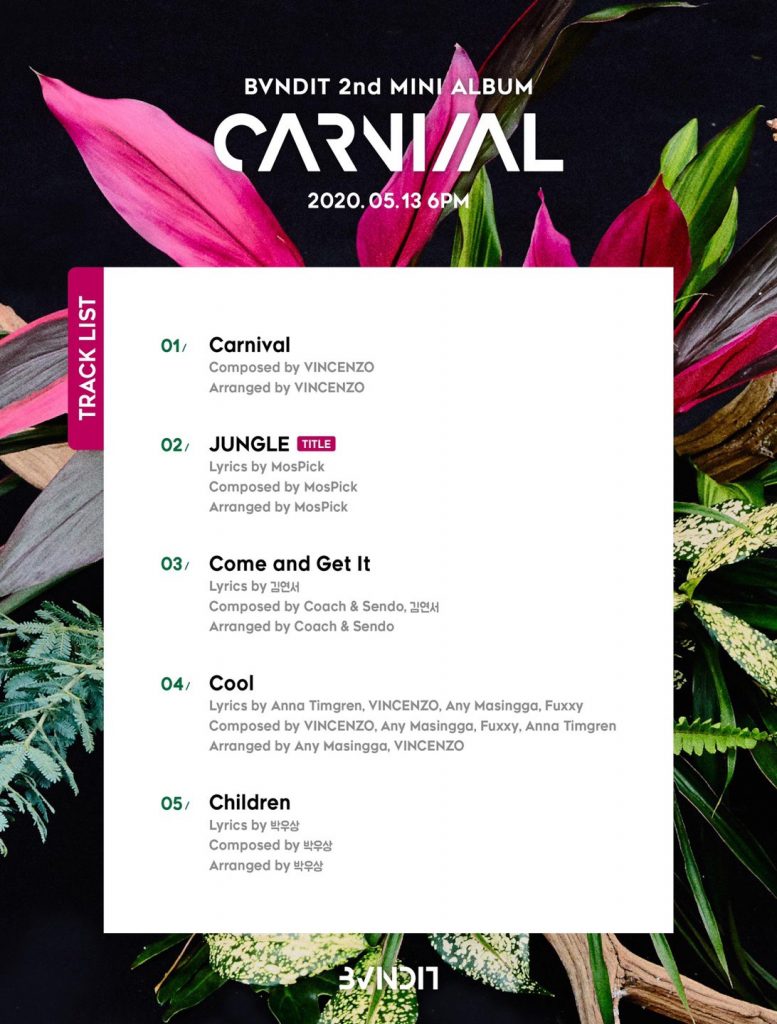 Thereafter, on May 8, Bvnditbul were able to see the first teaser video for the title track “Jungle.” The short video begins with the appearances BVNDIT members who look mysteriously enchanting. The music is upbeat and the vocals of BVNDIT can be heard in the background saying, “I am the queen in the jungle.”

Next, the highlight medley was released on BVNDIT’s official YouTube channel. The film is like a vintage camera taking snapshots of Carnival’s tracks.

Finally, BVNDIT boosted Bvnditbul’s anticipation for the comeback with their second fast-paced teaser for “Jungle.”

BVNDIT’s Carnival album shows their confidence and how powerful their presence is through their five tracks.

The first track, “Carnival” is an opening to the album with only instrumental music that gives a refreshing aura with the background sounds of birds and elephants.

“Jungle” conveys a message of how BVNDIT is a group of queens with their powerful, synchronizing vocals. The lyrics depict women empowerment as they sing of being on a different level and asking to call their names.

The third track “Come and Get It” makes listeners want to dance with the sound of clapping hands at the backdrop. It creates a sensational mood with amazing beats.

The next track, “Cool,” is another bop that demonstrates how excellent BVNDIT sings in English. Their voices are perfectly clear for listeners to make out the words. BVNDIT is surely “playing it cool” in their “lady crew.”

Lastly, “Children” is different than the other tracks. Instead of displaying the concept of widerness, it radiates a youthful energy as they sing “I am young.” This track has more of a relaxing beat compared to the other tracks of the album.

The music video showcases a contrast between the city and nature, where the artists stunningly dance in different outfits. Something to note is how beautiful the locations in the MV are, such as Kyung Hee University and Universal Arts Theater. At the Kyung Hee University, the members wore white clothes, making them look like angels.

With their energetic performance, BVNDIT presents a strong, independent girl group that proves each member is indeed a “queen of the jungle.” The effects in the video of the flowers blossoming portray how this talented group is growing and rising to be queens in the K-pop industry.