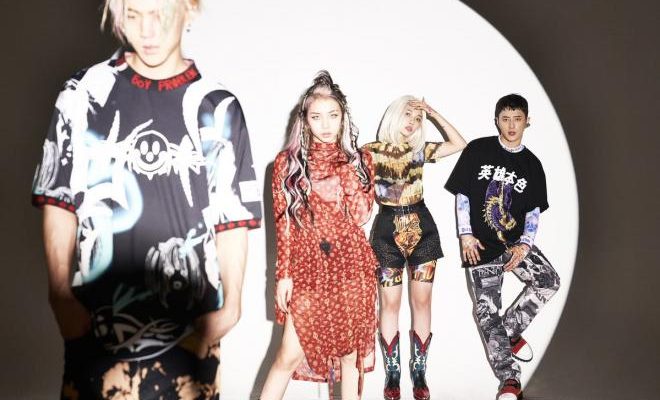 Ever since their debut in 2017, KARD, formed of members BM, J.Seph, Jiwoo, and Somin, proves to be an anomaly in the K-pop industry. Besides being the only active co-ed group currently, the group quickly established their own distinct sound, capturing many hearts domestically and abroad.

Moreover, against the common grain of tactfully manicured groups, KARD retained a rare openness and down-to-earth honesty. Now, three years into their career, KARD releases a thought-provoking and bold release with their single album Way With Words. 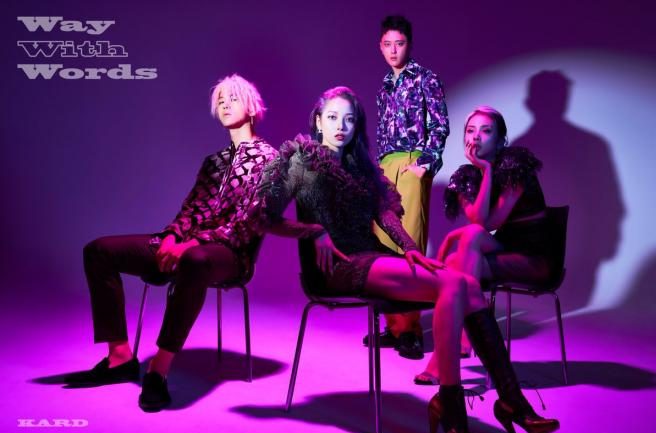 KARD first made headlines with the news that they would be releasing their first single album, Way With Words. The news thrilled fans who have been eagerly anticipating new music since the group’s release of their fourth extended play, Red Moon, in February.

The group continued their comeback promotions by rolling out album concept photos for each member as well as a unit, across their SNS platforms. 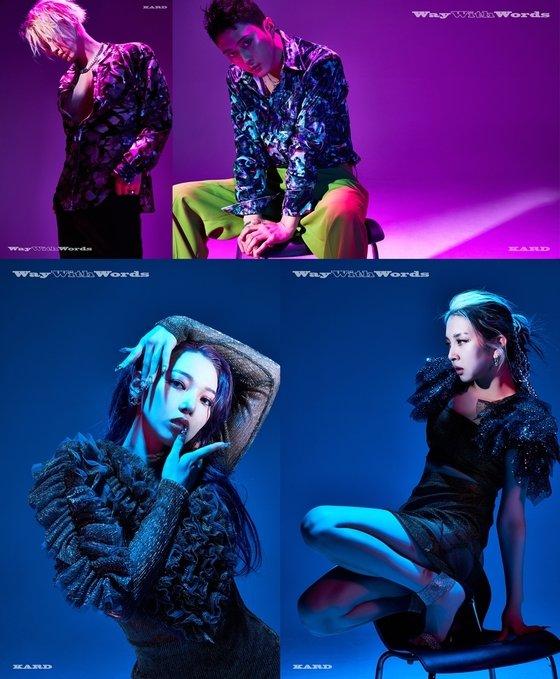 The neon lighting and edgy styling created a moodier atmosphere for their upcoming release.

Shortly after the first images released, KARD subsequently unveiled the second round of photos specifically dedicated to the album’s title track, “GUNSHOT”. In contrast to the prior shoot, the new images encapsulated a grittier vibe with their graphic outfits. 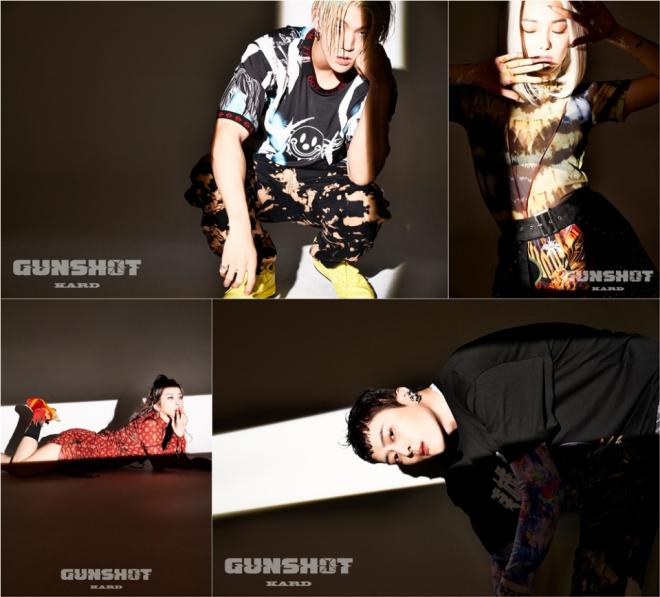 The group photo of the members immersed in an actual spotlight piqued curiosity for the upcoming track’s lyrical message. 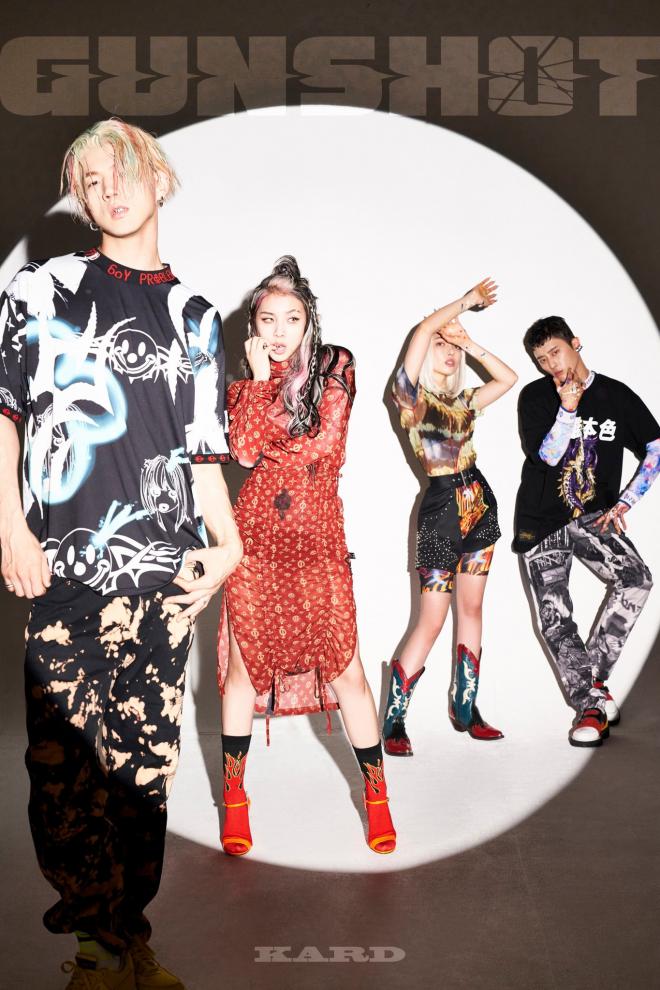 Following the release of concept images, KARD delivered a music spoiler for the single album. The video provided teasers for the album’s three tracks, “AH EE YAH”, “GUNSHOT”, and “HOLD ON”.

One day later, the group posted a visual concept video, revealing perhaps their darkest image yet.

KARD paired this release with a music video teaser. Featuring intensity-filled scenes of fire and masked faces, the suspenseful video signaled that Way With Words would make a bold message.

“AH EE YAH” beckons the listener in with its sweet and warm album opening. The song’s vocally driven melody highlights Jiwoo and Somin’s angelic voices, which aptly deliver the track’s yearning-for-love lyrics. Meanwhile, BM and J.Seph’s lower raps provide complementary contrast. While the members croon about wanting to breach the friend zone, the song’s refreshing and catchy tune lightens the pining lyrics and shapes the song into a hopeful, brighter track.

As stated by member BM, Way With Words, poignantly touches on the topic of verbal abuse and its title track, “GUNSHOT” is dedicated to every victim. Taking on a bass-heavy, trap-style reminiscent of KARD’s earlier track “Dumb Litty”, the song’s message is just as powerful as its sound. Likening insults to bullets, the track equates verbal abuse to physical pain.

Furthermore, “GUNSHOT” implicitly addresses gaslighting and manipulation as it calls attention to abusers’ use of love to excuse their actions. The track’s third verse is the song’s climactic turning point, including empowering statements like “I can’t stand it anymore”, ending the song with “I’ve bled enough”. Though the song discusses the power of words and verbal abuse, it ironically turns the tables as its lyrics turn from those of pain to defiance. Bold in its message and paired with incredible music production, “GUNSHOT” may be KARD’s most stunning title track to date.

Lastly, “HOLD ON”, is a sincerely penned, emotional ballad concluding the album. Written by BM as a send-off for J.Seph, who is due to enlist at some point following their recent comeback, the song is a true ode to friendship. Despite being a farewell song, rather than lingering on the pain of separation, “HOLD ON” celebrates the fond memories shared and promises an inevitable, happy reunion.

As a collective album, each track contributes to proving KARD’s immense musical range. Moreover, the songs are also a self-reflexive nod to the album’s title, Way With Words. As each song delivers its own unique message, the group proves their lyrical sensibility coupled with riveting music production to match.

The music video for “GUNSHOT” provides a strong visceral watching experience. Its color contrasts between neon lighting, cooler all-white sets, and warmer-toned scenes brightened with fire, keeps the viewer entranced. Furthermore, its rapid distortion editing paired with scenes of the members in a hypnotic trance creates an eerie atmosphere.

Punctuated by KARD’s signature strong choreography, the video was also a thematic experience. The members’ grim expressions transition into sinister defiance by the end of the video, mimicking the song’s lyrics. Notably, the video includes various elements of media portrayal including microphones, pencils, televisions, and surveillance cameras. Seemingly taking a stab towards verbal abuse not only within personal relationships but also within the broader society, the music video like its song, contains a grand message.

Its end is a surprising twist, showing Jiwoo holding a gun to another version of herself. Shooting her alternate self, the end could symbolize many things– an end to one’s personal verbal abuse, or even an end to a past self that accepted verbal abuse by others. Regardless of what meaning the viewer identifies with, “GUNSHOT”‘s music video balances an obvious message with more ambiguity. In this manner, KARD allows fans to find their own personal resonating color with their message.