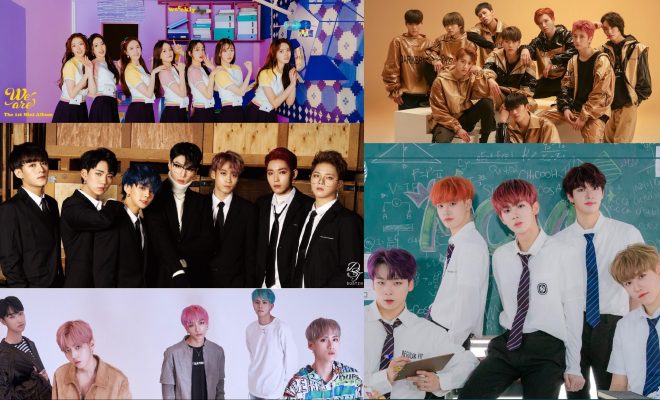 Get familiar with the K-pop rookies who have entered the music scene in the first half of 2020.

In the K-pop industry, each year is filled with many different new groups and artists who are eager to make their debuts. Thus, we are excited to compile this list of the rookie groups who have debuted in the first half of 2020! 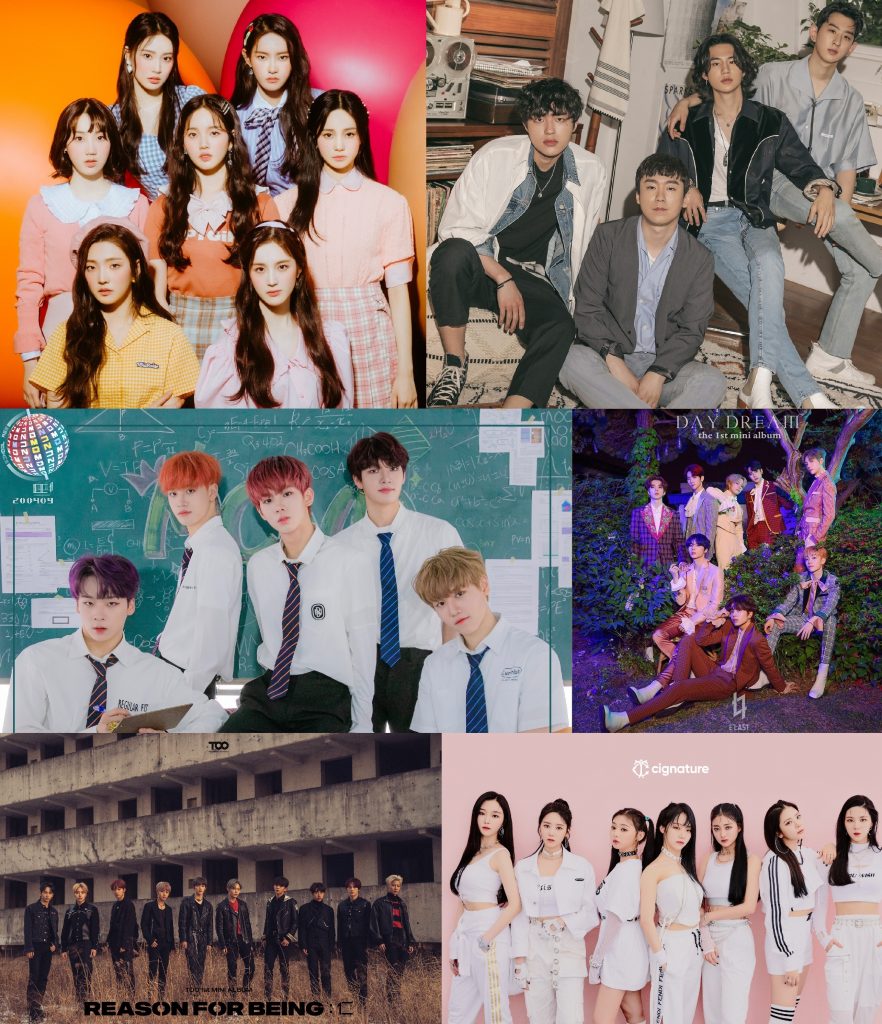 2020 marked the start not only of a new year but also a new decade and already there are a lot of new names in K-pop. Sometimes, it is hard to keep up with new artists, so we are going to present a short introduction to the freshly debuted artists.

Dustin is one of the first new K-pop acts which debuted near the start of the new year. The group entered the music scene with the digital single album “Burn”, achieving a spectacular rank in music charts.

The group already made a notable achievement on June 24 by winning the “Rookie Boy Group Award”. There is also news of the boys winning yet another prize at Korea Culture and Entertainment Star Broadcasting Awards this coming August 1.

Dustin’s fandom name, TheStan, are surely looking forward to the group to come back with new music soon.

Both members were part of the group MYTEEN which confirmed its disbandment in 2019. In addition, the duo participated in the survival show Produce X 101, but neither made it to the final lineup.

Later, the two were announced to debut as a unit under the name B.O.Y. They released the digital single “Blurry” back in August 2019 as a gift for their fans.

The group made its official debut in January 2020, with the mini-album Phase One: You and “My Angel” serving as the title song.

The group started off with five members and debuted with the first extended play We Tuzi. Moreover, “My 1st Hero” served as the title track for their first promotion period. Later on, 2Z made a comeback with the second album Nostrum and the title song “Doctor” on May 4.

The group, despite just a rookie, already went through a few changes, On June 17, the agency-in-charge announced member Hyunwoong’s decision to leave, making 2Z a four-member group. In early July, another member was added under the name Zunon, returning the band into its quintet form.

Most of the girls were already known to the public as they were part of C9 Entertainment’s previous girl group, GOOD Day. In addition, the name changed into Cignature and the full line-up was revealed to include two new faces.

DKB debuted with the mini-album Youth and the powerful title track “Sorry Mama”. After their successful entrance into the K-pop scene, the group made a comeback in May with the second mini-album LOVE.

They promoted the song “Still” which allowed the boys to show a more mature charm. Just at the time of the boys’ first comeback, they revealed a cute present to the growing fandom. DKB gifted its fans with a name of its own, BB, which stands for DKB’s Bestie.

Episode is a five-member girl group previously known as Vitamin Angel. The group debuted in 2015, but in late 2019, its agency announced the girls will continue on under a new name.

The original group used to have seven more members, so with the present five members, it was a significant change to the team. Episode released the debut single “Open My Door” in February.

A new boy band joined the ranks of the rookies in the new year. D.Coy debuted with its first single “Color Magic”. The band also recently announced its upcoming comeback, with a new single titled “Go Away” this July 21.

Daydream debuted with the digital single “Numnum” and a total of four members. Although, around April, three of them, Chaeha, Sorin and Alim all decided to leave the group, leaving Sarrang as the only one member left. Later on, two new members were revealed, namely Ara and Hyejin.

The five-member boy group is not new to the music scene. Their first debut was in Taiwan back in 2016. The boys then finally made their debut in South Korea in February 2020 with the single “Timeless”, showing beautiful vocal abilities.

In addition, they had already made their comeback in May with the second single album Soundtracks for the Lost & Broken: Give You Up, consisting of the title track “Give You Up” and member Eunho’s solo song “Waterfall”.

The five boys debuted with the digital hip-hop single “It’s Gonna Hurt”, bringing their own color right from the debut. In particular, Xenex won the L.O.A Project Dance Contest held in August 2019. earning them the attention of Brazilian K-pop fans,

MCND stands for “Music Creates New Dream”. The group made its debut with the mini-album Into The Ice Age. The title track “Ice Age” is a highly addictive song that will surely hook you up at the very start.

In addition, the boys have released two digital singles as well. The first one, “Top Gang”, was prior to their debut on January 2. The second one, “Spring”,  served as the group’s comeback in April, helping them earn the title “monster rookie”

The group also announced its self-produced reality GEMCND, which started on July 3, with new contents being uploaded every Friday.

Craxy has been preparing for its official debut for a while. The group went by Wish Girls before they debuted, working on various projects, including the digital single “My Universe”.

The agency announced the girls’ debut to be on March 1, but they had to postpone it until March 3 due to internal issues. The debut album went by the same name as their pre-debut single My Universe, using “Aria” as its main track.

The boy band is part of the survival show SuperBand where it won 3rd place. Purple Rain made an official debut with the single “The King Must Die”, bringing an impressive and distinctive song to life.

In addition, the band made a comeback with the release of its first extended play Op 1 on June 23. The album included seven songs, along with the debut track and the new title song “Waking Up”.

Trusty is a quartet under Playmusic who debuted with the single “Tell Me More”. The group showed its unique sound which is easy to listen to at any time.

The group has been active since 2018 when they made their Japanese debut, releasing two mini-albums. In early 2020, the agency revealed MY.st would be debuting in Korea as well with the mini-album The Glow: Eden.

Moreover, two of the members were part of Mnet’s Boys 24 and Produce 101 Season 2, namely Woojin and Woncheol respectively.

The group was formed through the survival show World Klass and debuted on April 1 with the mini-album Reason for Being : Benevolence. The title track “Magnolia” served as the group’s way to K-pop fans’ hearts.

The boys had not had a rest day since their debut. Soon after they entered the K-pop scene, they participated in the entertainment show Road To Kingdom in which they showed flawless and stunning performances.

In June, TOO revealed they would be making their first comeback with the second mini-album Running TOOgether, set for release on July 15. The title track was revealed to be “Count 1, 2”. Not only that, the rookies will also be staring in their own reality show TOO Mystery.

The members participated in jTBC’s show SuperBand before forming Bandage and debuting in April. The boy band released its first digital single Square One which included a total of three songs. The tittle track “Invisibles” captivated music fans with its mysterious sound.

Later in June, Bandage made a comeback with its first full-length album 432, bringing more songs to love and listen to.

Starship’s newest boy group Cravity made an impactful debut with its mini-album Hideout: Remember Who We Are. In particular, the title track “Break All The Rules” and the sub-song “Jumper” captured the hearts of fans effortlessly.

After making a memorable debut, the boys revealed they would be part of the line-up for KCON:TACT 2020 SUMMER. In the mean time, they were also preparing to show a whole new side to them by releasing a special video for one of their songs, “Cloud 9”.

The group is already taking the powerful rookie status with its achievements in such a short period since debut.

The duo H&D had been active prior to its official debut in April. The two members previously participated in the reality show Produce X 101 where they ended in the final line-up. The boys debuted in X1 with the other nine successful participants in the program.

Sadly, the group disbanded after a couple of months but the two boys continued on as a duo. H&D debuted with the mini-album Soulmate and the title song “Soul”. Their journey does not end there. The two are said to debut in a new boy group later this fall.

Another band graced the K-pop music world after participating in the show SuperBand. Their digital single was called Dear and included the title track “Flowering” as well as an intro song.

The girl group debuted with the single album Exclamation, which included the catchy title “woo!ah!” and “Payday”. In particular, the members had been getting a lot of attention since they stepped into the music scene.

Since the girls’ appearance on a music broadcast, the total followers to their official social accounts exceeded one million in a month since their debut. In addition, Woo!Ah!’s debut stages on music shows each recorded over 5,000 viewers.

Another group making a splash debut is Secret Number with its single album Who Dis? It included the title song of the same name and a second track called “Holiday”. The quintet quickly garnered a lot of attention from fans in the first weeks of its debut.

Another thing which makes Secret Number stand out is its multinational members. Moreover, this is the first K-pop girl group with an Indonesian representative in the face of Dita. In addition, Jinny and Denise are from the United States, Soodam is from South Korean, and Lea is from Japan.

The group consists of of five members and made its debut with the single Prequel and the title song “ColorFull”. Members Green, ChaeA, Ari and Bomin were former members of the girl group Good Day. Meanwhile, Lina originally debuted as a solo artist under the name Blenn.

The boy group was supposed to debut back in May 2020, but had to postpone the date with a few days. They had been revealing dance covers of famous songs prior to their debut which garnered attention from fans.

The boys, despite not revealing a music video, made an impression with their first single “Burn It Up”.

E’LAST is previously known as EBOYZ as well as E Entertainment’s first group. Prior to their debut, they revealed their own reality show in which the members showed their debut preparations.

The name of the group is an abbreviation of “Everlasting”, which can mean “Eternity” or “Infinity”. In particular, the boys want to be by their fans’ side through their music, without the restriction of space and time.

The debut mini-album DAY DREAM, and especially the title track “Swear”, included a lot of dreamy and fairy tale vibes. The eight princes managed to capture the attention of music lovers with their own colors.

In addition, the group includes two members who were previously part of Produce X 101, Wonhyuk and Wonjun.

Weeekly is the last group to debut in the first half of 2020. The girl group is previously known as FAVE Girls or PlayM Girls. They were the newest addition to the PlayM family and made their debut with the mini-album Weeekly and the title “Tag Me (@Me)”.

The girls’ debut music video impressively surpassed 10 million views on YouTube in just seven days since its release. The girls continue to gain interest from fans, building up the curiosity of what their future achievements would be.