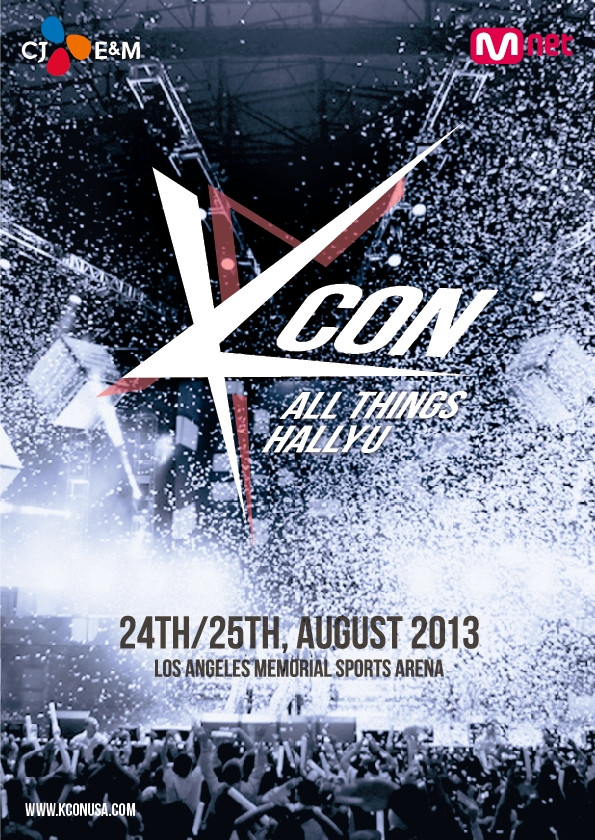 Building on the success of last year’s inaugural event, KCON is returning to Southern California this August expanding the biggest fan celebration of Korean entertainment and culture to two days and taking over a larger venue in the heart of Los Angeles. Last year’s one-day convention and concert drew over 10,000 fans from all across the U.S.

KCON will be produced by Mnet America, a youth entertainment brand for all things Asian cool, which includes the biggest national, English-language lifestyle network in the U.S. for fans of Asian pop culture.

“Mnet America is proud to be the ever growing ambassador of K-Pop and Korean Pop culture here in the United States,” said Ted Kim, president and CEO of Mnet America. “KCON is an integral piece to our mission to give fans access and expand the awareness of Hallyu – which one year and more than 1.5 billion views after Gangnam Style exploded on YouTube, continues to make waves in the U.S.”

KCON 2013, which is now a two-day event, will be packed with activities aimed at giving attendees the unique access that only KCON can offer. With a schedule filled with artist meet-and-greets, photo ops, celebrity panels, contests and fan workshops, everyone from the super-fan of K-Pop and K-Drama to those ready to be initiated into the global Hallyu, or Korean Wave movement, will get lost in an experience unlike any other in the country. Capping off two-days of total Korean entertainment immersion will be the first ever U.S. hosted episode of the #1 K-Pop chart show, ‘M COUNTDOWN’ in the form of a start-studded K-Pop concert that fans will not want to miss. Line-up details will be released in summer.

KCON is set to take place on August 24 and 25 at the Los Angeles Memorial Sports Arena in Los Angeles, California. For more information and updates, please visit kconusa.com.

KCON is the first ever large-scale convention dedicated to ‘All Things Hallyu.’ The convention was launched in 2012 in hopes to establish an annual flagship event that will improve the American K-Pop fan experience by providing an affordable way for fans to connect with each other as well as artists and professionals in the K-pop industry.

KCON 2012 surpassed expectations in all aspects including the achievement of over 10,000 fans attending the convention, 6.5 million people reached on Facebook, and ranking in the top 10 Twitter trending topics worldwide.

FacebookTwitter
SubscribeGoogleWhatsappPinterestDiggRedditStumbleuponVkWeiboPocketTumblrMailMeneameOdnoklassniki
Related Items2013CaliforniaHallyuK-popKCONKpopMnet AmericaUS
← Previous Story Be the next K-pop Star, Join ‘Alpha Dream Stage Malaysia Talent Search 2013’!
Next Story → G-Dragon shows why he is ‘One Of A Kind’ in Malaysia