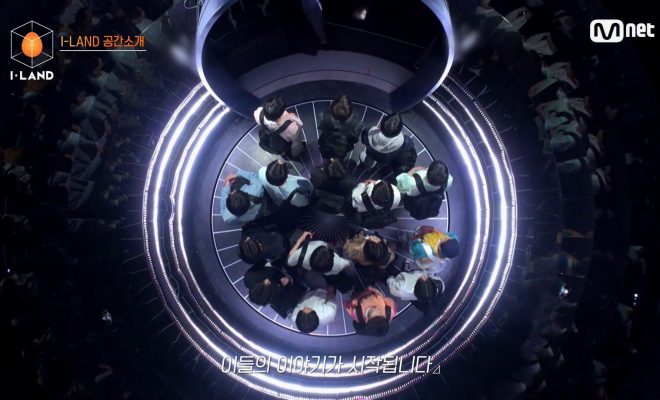 Unfurling the process of creating a boy group unlike any other, I-LAND presents some bittersweet moments of dreams and struggles.

Finally, after enticing viewers with intriguing teasers and inclusion of top names as a part of the show, Mnet’s I-LAND sets sail into an arduous journey of hopes and dreams of 23 young boys.

Spearheaded by Bang Si Hyuk, Rain and Zico, who will lead the trainees, the program premiered on June 26. Whilst, to help viewers understand the show better, Nam Goong Min portrays the role of a storyteller. 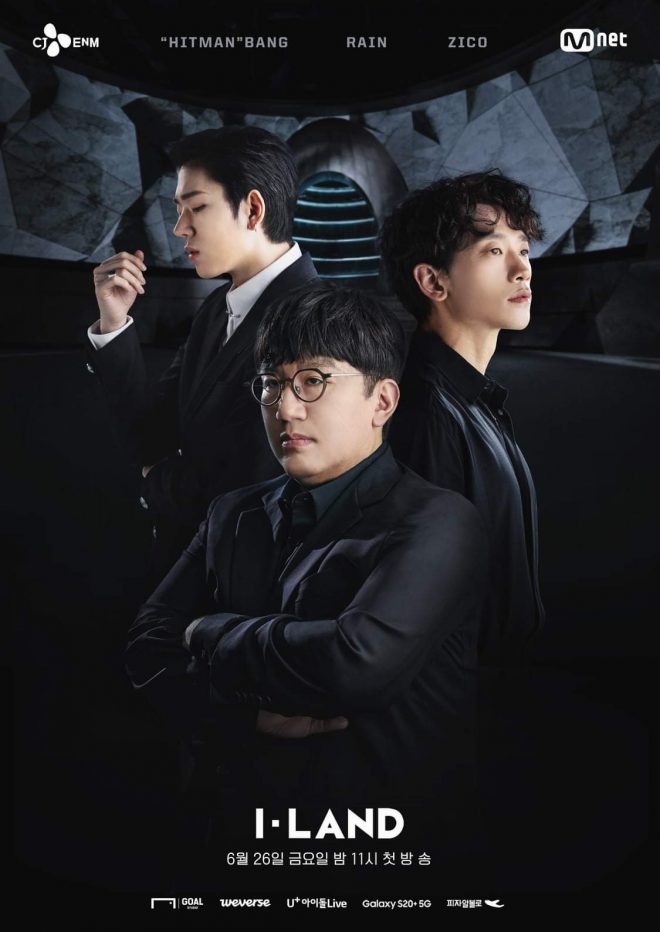 Episode 1 gives an introduction to the trainees who also showcased their potential through their performances. This was also the first time, the show’s mentors Bang Si Hyuk, Rain and Zico, collectively watched over the trainees together. Boasting of a high-production quality, the stage design of I-LAND is very impressive. 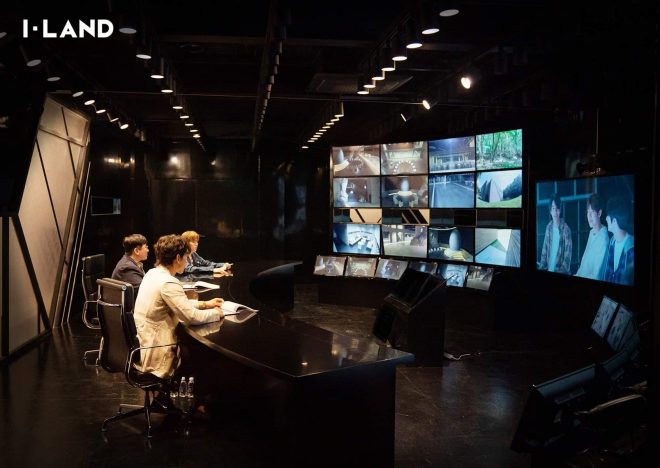 The 23 boys who gathered were immediately put to the test as they have to perform and assess each other. Only 12 boys will get the chance to become an I-LANDER. It is up to the contestants to decide whether a trainee deserves a pass to I-LAND or not, the voting of which was cast by raising hands.

Taking the courageous initiative to perform first was Choi Seon, the oldest trainee who had been training for four years. He performed GOT7’s “Lullaby” and got into I-LAND after receiving 22 votes.

Next up, was the unit of Big Hit trainees, Jay and Park Sunghoon who took everyone’s breathe away with their jaw-dropping performance of NCT U’s “The 7th Sense”. This led to Rain commending the duo on their amazing synchronization. Thereafter, it was no surprise that both the performers earned the ticket to I-LAND.

The third batch of participants to exhibit their talents were an overseas unit of Nicholas, Niki and Hanbin who staged SuperM’s “Jopping”. With the decrease in number of spots for I-LAND, the contestants became less generous in voting. However, Niki shone out and received an “IN” but unfortunately, Hanbin got an “OUT”.

As the competition gets fiercer, the nervousness hits harder. K, a contestant who was highly praised by Bang Si Hyuk performs “Danger”. Despite getting an entry to I-LAND, the trainee was upset as he could not show his full potential.

Next person to hit the stage was Big Hit’s ace trainee, Lee Heeseung, who according to Bang Si Hyuk, has got it all. Performing NCT U’s “Boss”, he burnt the stage with his fiery performance. Moreover, mentors who were monitoring praised the young trainee’s vocals.

Following with more great stages, the unit of Daniel and EJ exuded their refreshing charms as they gave a cutesy performance of Zico’s “Any Song”. Their act was loved by the other trainees gaining them an entry to I-LAND. Likewise, the producers acknowledged the unit’s potential.

Participants remaining are many but the seats are limited. As a result, from the group that presented MONSTA X’s “Shoot Out”, only Sungchul could make whereas Jaebeom and Jimin got eliminated even though their performance was nothing short of fabulous.

Meeting a similar fate was the team of Geonu, Kyungmin and Jaeho who prepared an awesome stage of VIXX’s “Chained Up”. A closely knitted group, the trio wanted to proceed forward together but only Geonu could get the green light.

Then came Taki, an interesting character who made everyone coo over his cuteness. The young trainee displayed his power through EXO’s “Monster”. Further, to appeal the other contestants, he also showcased his locking moves which solidified the votes.

Following this, came another trio of Yoonwon, Jungwon and Taeyong, who gave a glimpse of their talents through their rendition of Jay Park’s “All I Wanna Do”. When the turn came for appealing individually, Yoonwon made a mistake which resulted in his ouster. Taeyong also got eliminated and only Jungwon moved to the next stage.

Lastly, Sunoo, Jake and Youngbin impressed everyone with their enjoyable and entertaining act. Despite having a limited training experience, the team wonderfully executed TXT’s “Crown”. As a result, all of them got the required amount of votes to gain an access to I-LAND.

Now that 16 candidates got selected and entered the I-LAND facility, what happens to the others? The remaining ones who could not make it, are not eliminated from the show. Rather, they become a part of GROUND. For those, who are at GROUND, they have absolutely no chance to debut, but they can train here and try to move up to I-LAND.

Meanwhile, at the I-LAND, another voting is scheduled. Since I-LAND is meant to house only 12 people, the I-LANDERs must now, eliminate another 4 people who will get demoted to the ground.

With the pressure to survive as a group as well as stand out individually, the I-LANDERs faced some hiccups in Episode 2. But they finally put forward their “Into the I-LAND” performance in the second episode of the show. Facing a critical assessment, the team’s cumulative performances score will decide on how many members will leave the I-LAND.

Throughout the first episode, it was emphasized that the I-LAND can have only 12 occupants. Those who did not make the cut into the glorious 12 can work way their way upwards by working from the GROUND.

Now, in the first episode, 16 trainees got inside but as only 12 can remain. So another trial began where the contestants have to vote out each other. In a surprising turn of events occurred as Niki voted out his close friend Taki whereas EJ chose his unit member Daniel for ousting.

After all the dice that were cast, the contestants who had to dropout were Sunoo, Sungchul, EJ, and Taki. These trainees have to go to the GROUND and train with the others who have not made it to top 12.

Hence, the 12 that got stay at the I-LAND were

Whereas, the GROUND members are

Before the trainees could even settle at their new dorms, they were introduced to a new test. The I-LANDERs must perform their first signal song, “Into the I-LAND” which will determine how many I-LANDERs get to continue their journey on I-LAND.

Reiterating the importance of teamwork, though the participants will be assessed individually, the overall total score will be the determining factor on how many of the members get removed from the I-LAND. The task is massive as the contestants must do everything by themselves including allocation of the song parts.

Some tension at I-LAND

At the I-LAND house, everything was going well as the trainees assigned parts to each other. It was decided by all the members that the center will be Heeseung, the Big Hit ace, who had wowed everyone with his all-round skills in his first performance.

Practice started with Heeseung leading the choreography as well as helping his teammates meet their shortcomings. However, the other trainees did not like their leader’s way of doing things. After that, all the trainees gathered together to discuss the problem at hand.

Respecting everyone’s opinions, Heeseung decides to step down from his center position and gave it away to Niki. Though upset at the fact that he has now only one line to sing, the young trainee stated that he always had the team’s need on his mind and therefore, he sacrificed his position.

Ahead of the big performance, Rain surprises the I-LANDERs with his appearance. Rain asks the boys to perform in his presence so that he can give them a constructive feedback to improve upon.

After observing the performances, Rain pointed out that Niki, who is the center is good at dancing but his singing is off-pitch. Because, he has lots of parts in the song, his performance can affect the overall impression of the group.

The I-LANDERs gather again to discuss on how to solve the ongoing problem. Now, most of the trainees wanted to give the center position back to Heeseung again. On the other hand, Heeseung tells the members that whatever action he takes will be for the sake of the team.

Earlier, he gave up his position for the sake of the team. But if Niki does not agree, then he will not take the center part. At the end, after a long suspense, it was revealed that Niki maintained center role.

Other than the producers, the people who will judge the performance that will determine the fate of I-LANDERs includes Son Seungduk, Wonderkid, and Doobu. In a conversation among themselves, the assessors said that they will be strict in their evaluation.

Finally, the performance of “Into the I-LAND” by the 12 I-LANDERs began. The song holds even more meaning after the program highlighted what the trainees had to go through while preparing for the performance.

The stage for the highly awaited performance was beautifully set. Adding to the marvels was the moving stage, wherein the contestants had to perform the difficult song along with putting out the hardcore dance moves.

Finally, the individual scores were revealed randomly. The judges were not lenient at all which was reflected in the dismal numbers. Overall, the average team score was 59, which meant that 6 trainees will move from I-LAND to the GROUND.

I-LAND airs every Friday at 11 PM KST via Mnet. The show can also be streamed live on Big Hit and Mnet’s respective YouTube channels.