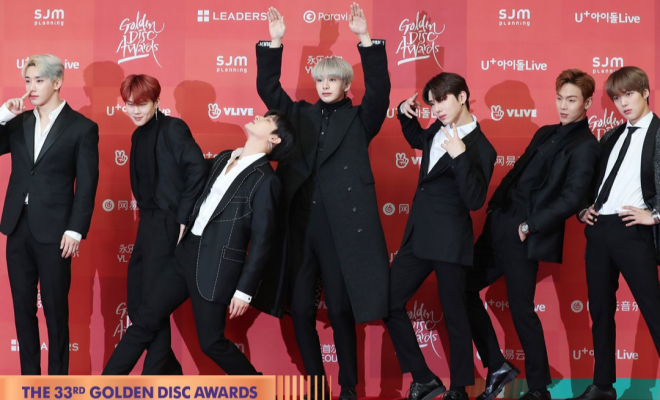 MONSTA X is not just known for their intense performances and incredible stages.

MONSTA X is riding the fame train throughout the world. Their near future album this year, which has not been named yet, is already mentioned as one to watch out for in 2019, according to Billboard. Aside from their monstrous talents, these boys are also incredibly goofy, proven as below.

The boys raided ENTERCOM’s vending machines during their short visit. Through the video they posted, we received grade-A intel about what the members usually snack on. Minhyuk grabs a pack of oreos and a can of ginger ale. He sweetly tells the camera that those are his favorite snacks. Hyungwon likes potato chips because of their shape. The latter also clasped on a can of Redbull because he needed energy at the time of the raid.

Jooheon opts for a pretzel and beer combo, while Wonho reaches for a pack of potato chips. Kihyun said that he likes pretzels because they’re simple and not too salty. I.M pairs potato chips flavored in barbecue powder with beer and finishes it of with a cookies and cream Hershey’s bar.

Wanna know why Shownu likes 7Up?

Who is best dressed? And most likely to always be homesick?

Kihyun is well-known as the king of forehead flicking so they put the other members to the test. With the help of a simple game, they tested out if Kihyun really does give the most powerful forehead flicks. After playing with the toy, they concluded Minhyuk and I.M can flick the hardest with a score of 987 points. Kihyun comes second with 845 points and Shownu comes third with 825 points.

Who do you think received the inevitable forehead flick punishment?

During The Connect World Tour, there was a special stage performed by Kihyun, Wonho and Minhyuk. Wonho composed “I Do Love You” especially for the tour. Many fans were surprised and happy that the song is also included in their latest album, Take 1. Are You There?. Recently, the three dashing lads released a special music video on their channel. It’s the studio version of their take of “I Do Love You”. They filmed the swoon-worthy scenes and breathtaking views during their tour leg in Amsterdam.

MONSTA X continues to grow as a top global artist, yet they always stay positive and humble. Stay update with them on their official Twitter account!