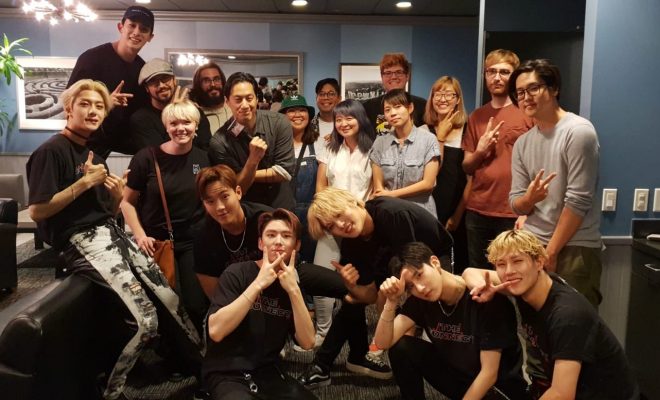 By Yann | May 28, 2019
FacebookTwitter
SubscribeGoogleWhatsappPinterestDiggRedditStumbleuponVkWeiboPocketTumblrMailMeneameOdnoklassniki

We Bare Bears‘ creator Daniel Chong has nothing but great things to say about MONSTA X!

The boys of MONSTA X – and their Monbebes, of course – weren’t the only ones delighted with the group’s appearance on the hit cartoon show as its first-ever K-Pop guests!

With the success of the series’ latest episode “Panda’s Birthday” which featured the boy group, We Bare Bears‘ creator Daniel Chong himself spoke about his experience working with MONSTA X’s seven members.

“Working with Monsta X was an amazing experience for me and the We Bear Bears team,” Daniel Chong said. “It was very natural to integrate the members into the episode, and they all played the tone and comedy perfectly,” he also shared.

Making sure that the group’s appearance on the show would be something extremely unique to them, Chong revealed that the We Bare Bears team did their best to tailor the episode especially for the group.

“We’ve put a lot of effort into capturing the distinct personalities of each member, and we’ve even added an inner joke that only real fans of MONSTA X can know,” the creator of the well-loved cartoon, which airs in over two hundred countries worldwide, stated. “I hope everyone likes this episode as much as we tried to make it fun,” he added as well.

The group’s appearance on the show started with Chong hearing fans buzzing about how MONSTA X’s leader Shownu resembles one of the cartoon’s lead characters Grizzly. Capturing his attention, the We Bare Bears creator then cooperated with the group to come up with their animated versions which all seven members dubbed themselves as a treat to the fans who made the extremely adorable collaboration possible.