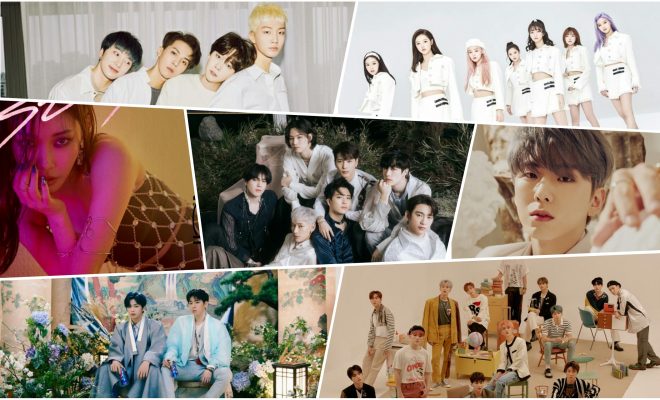 Despite the current circumstances, the K-Pop industry remained pretty steady in April 2020. This was seen in how various artists stayed steadfast in delivering top-of-the-line music releases through their comebacks. In addition to the title tracks they released which became chart-topping hits, they also unveiled various brilliant b-sides which captured our hearts.

Making up for the lack of concerts, many musicians also opted to connect with their fans through song covers and special releases as well. With this, the playlists of K-Pop fans, including us, remained to be filled with great bops throughout the entire month.

Check out our Monthly Must-Listen staff picks (in no particular order) from April 2020: 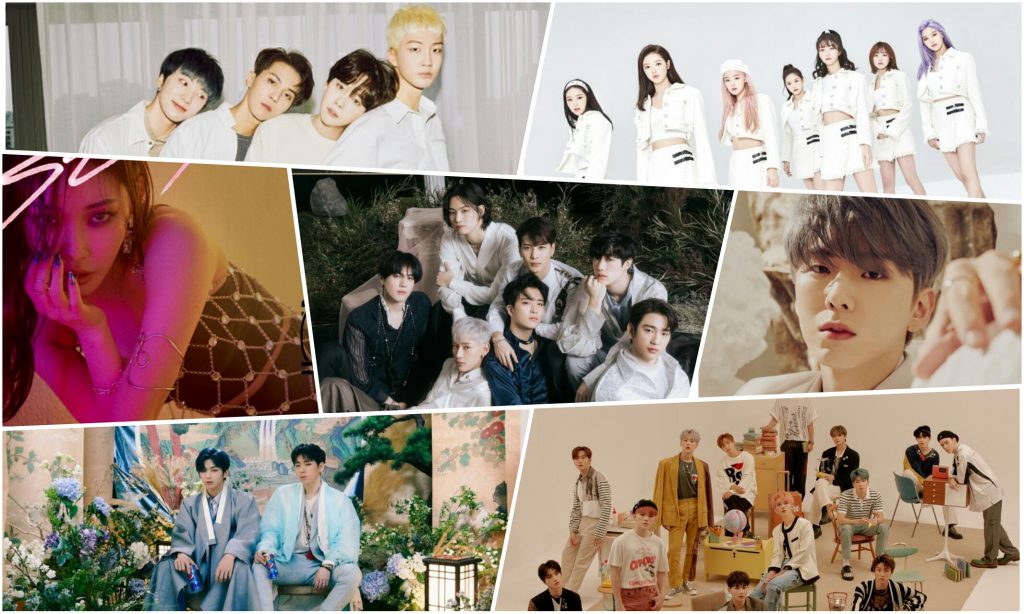 Kihyun is an amazing vocalist—and that’s on period. Aside from his powerful rendition of the famous Imagine Dragons song, what got me hooked further into this cover was how he looked really absorbed in the atmosphere and vibe of “Believer”. The way he grooved along to its rock rhythm and even projected facial expressions that proved how immersed he was into the track showed how much he was enjoying singing it—which is among the most important aspects of a performance for me.

Although it was difficult to pick just one favourite b-side from GOT7’s mini-album DYE, the charismatic performances of “Poison” in music shows definitely drew me in and showed a wonderful side to this song that Yugyeom himself composed. In addition to its addicting rhythm, the way “Poison” put the tale of persistent love into words so poetically through its lyrics was an element that I loved so much.

“Still Love” served as an OST for the drama How To Buy A Friend, and A.C.E’s Byeongkwan and Chan managed to make it sound as heavenly as regular releases do. Melodiously combining a unique guitar riff with a catchy hook, it contained a message of regret for a love lost, which Byeong Kwan’s strong rap and Chan’s smooth voice perfectly captured.

A.C.E’s Byeong Kwan And Chan Express Feelings Of Wanting Someone Back In OST For “How To Buy A Friend”

This sweet rendition put together two of the loveliest things in the world: Jaeyoon’s mellifluous voice and IU’s heart-fluttering song “Love Poem”. Proving the SF9 singer’s vocal prowess once again, the song put the spotlight on his sweet voice and immense control over his vocals.

“Oh my God” was the first thing I said upon hearing Ailee and Ravi open their collaboration track with such a glorious harmony. Ailee’s sweet and warm vocals blended so well with the calm yet powerful aura that Ravi radiated with his rap verses. Making listeners sail through with their soulful voices, the two artists created a beautiful musical chemistry. Despite being a duet, however, they were also able to stand out as individual performers without overpowering each other—which, in my opinion, is among the trickiest parts of a collaboration.

If there’s ever a song that reminds me of all the good times I’ve had at the beach, it’s this track. “Dolphin” has a funky instrumental and playful vocals that fit right into any summer playlist, but what I really like about the song is its easy-going vibe—listening to it on repeat makes me feel at ease and a little nostalgic. The lyrics about swimming in the ocean and, well, dolphins are a cute bonus.

A cutesy love song will catch my attention every now and then, and this month it’s “Think About Chu.” If you want to hear a boy band incorporate their sound into a timeless young love store, definitely give this song by NOIR a listen.

True to its name, “Future” is a song that talks about confidence and encourages its listeners to “jump up to the car, drive it to a bright future”—which, I think, is an important message that everyone needs to hear during these trying times.

APRIL’s long-awaited comeback to the music scene is reminiscent of 2000s K-Pop, which is probably why I love it so much. If you’re looking for a track to dance and let loose to, give this catchy, synth-fueled track a listen.

A lot of artists I’ve been following have been taking cues from music of the 90’s, and Chungha is no different. “Stay Tonight” manages to condense all of the good elements of 90’s music in three minutes, resulting in a cool and classic instrumental that you’ll want more of. This, combined with Chungha’s sassy and powerful vocals, makes this pre-release track unforgettable.

This Japanese track is surely another delightful treat for Carats! With its captivating music video featuring the thirteen shining idols’ beautiful visuals, the song also stuns through its sentimental vibe and heartwarming lyrics. Though the flowers may fall, it conveys a message of new beginnings.

This newest song from Apink is a perfect track to hype you up. The dance track appeals with its splendid oriental sensibility and addictive sounds partnered with its narration of having a calm heart despite the departure of a loved one.

Hearing this official soundtrack is a blissful moment while watching The King: Eternal Monarch. This song reminds us of the beauty of destiny.

Marking as the official debut of former X1 members Lee Han Gyul and Nam Do Hyun, this song shows one’s passion in trying to be better. Exuding a mysterious vibe, the debut track likewise delights with the duo’s fresh swag and fiery raps.

WINNER’s latest masterpiece charms with its touching lyrics and equally appealing cinematic music video. Singing their hearts out, the quartet hopes that this track will somehow give comfort to Inner Circles. Penned by Mino, my favorite lines are: “I’ve loved and also been hurt. For you, if those memories last as a warm feeling I’d ask for no more. Feet don’t fail me. Not even going to look back. Even if I run away like a coward, Please don’t forget me. Remember that there was someone next to you.”

I lost count on how many times I have listened to the song or watched the MV. Both have this magical feeling that engrosses you. It feels catchy but not like the types where a word is repeated until it gets stuck in your head. It is more on the melody and the strongly portrayed lyrics that just stick in your mind.

Somehow, when I first saw the name of the song I expected it to be a ballad but I was way off. It has this addictive beat combined with Changmin’s sweet vocals. One listen was enough to make me want to listen more to it and still not be tired of the song.

Another song which gives me a fantasy-like vibe. Hwasa’s distinctive voice works perfectly with the mystic melody. These types of songs are one of my favorite kinds because they usually have a strong feeling to them.

The song slightly reminds me of the older K-Pop songs with the funky and “crazy”-like notion. It’s perfect for relaxation and rebooting your mind.

As someone who does not listen to slow songs very often, this one grabbed me a bit too easily. It most likely has a lot to do with Kihyun’s flawless voice. Just listening to him hitting those high notes in the chorus and expressing the emotions of the song was enough to get me hooked.

Zico and Kang Daniel recently worked together for Pepsi X’s Global K-pop project. To be honest, I wasn’t expecting to enjoy a promotional song as much as I did. Co-composed by strong producers such as Steve Aoki, and the lyrics penned by Zico himself, “Refresh” felt as refreshing as the artists intended. I enjoyed the catchy beat and the vocals and rap carried the melody well, solidifying this as a great track to get you in a happy mood as the warmer weather approaches.

While “Love Again” is not the title track on NCT DREAM’s newest album, it was definitely my favorite. I was really excited to hear the song after watching the video teaser for this track, which perfectly encapsulated the members’ boyish charm. Upon listening to the full song, it did not disappoint. Groovy and playful, “Love Again” is a fun song that is nostalgically reminiscent of 90’s R&B.

All of the members in Mamamoo are known for their inspiring, fiery spirits. I was really looking forward to Solar’s first solo release because I anticipated she would have a wonderful message to say, and she truly did. “Spit It Out” is a sensual, Latin-inspired track that encourages listeners to do what they want and enjoy being themselves.

From GWSN’s newest EP, The Keys, “After the bloom (alone)” was my favorite b-side. It was by far the moodiest track of them all with its dark bass and a trap beat. I really loved the blend of the members’ deep raps and the higher, vocally driven chorus. The track was definitely a standout amongst the rest in the EP.

MCND is an emerging rookie group that just debuted in February, but they are consistently blowing me away. Their second title release, “Spring”, had me hooked. From the encouraging lyrics, to the upbeat vibe, to their strong choreography that accompanies the song, this release has been impressively powerful for a rookie group. Their stage presence and cohesiveness as a group are more reminiscent of senior groups rather than a newly debuted one. I am looking forward to seeing how they develop even further with more releases!

When I first heard this song, I was instantly drawn to its dynamic retro vibe and snapping undertones. Everything from the very first note all the way to its catchy hook and chorus is a true musical masterpiece. “Chocolate” radiates the epitome of vintage elegance mashed up with contemporary flair that can make any retro aficionado bop their heads to the beat. To top it off, the music video channels a classic black and white portrayal of scenes that look like they came straight out of an old fashioned mafia movie. It’s the ideal soundtrack to your mundane daily chores or weekend workouts.

April 1st may be known as April’s Fools Day, but it’s also the day that CIX launched their Japanese comeback single, “Revival”. The song conveys a strong message of love’s healing powers as it utilizes a calming keyboard and guitar-driven beat. If you ever find yourself on a roadtrip during golden hour, this track should definitely be at the top of your playlist.

The 9-member ensemble known as Cravity may have just made their debut last month, but they’re already trailblazing the music scene! This upbeat track tackles the issues of social conformity and the pressure of reality. The hard-hitting lyrics encourage people to be themselves and break free from the systematic matrix of society; because sometimes you’ve got to break the rules in order to do what’s right.

This feel-good R&B inspired song focuses on the wonderful adventures and trivial struggles of growing up. Coincidentally, the quirky tune is very suitable for the season, especially with Mother’s Day right around the corner. Shoutout to my mom who still guides me with words of wisdom on my journey to adulthood. No matter how grown up we are, we’ll always need a mother’s love.

Kwak Jin Eon is a charming crooner who never fails to deliver stellar lullaby music filled with soul. His latest masterpiece is the OST for the K-Drama Hospital Playlist, and it’s an infatuating melody with beautifully sentimental lyrics. “In Front of City Hall at the Subway Station” is best served warm on a lazy Sunday afternoon with your favorite set of friends, good times, hearty laughs, and a tall glass of iced tea.

What was your favourite release from April 2020? Let us know by leaving a comment below, giving us a holler on Facebook, or tweeting us at @hellokpop!