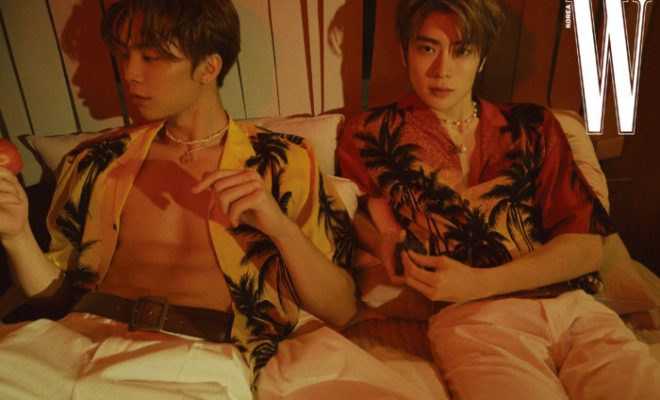 Romeo who? We only know NCT’s Johnny and Jaehyun.

NCT’s Johnny and Jaehyun have turned into movie stars in their recent photoshoot with the fashion magazine W Korea, where they gave off a trendy charm with a concept that reinterprets Romeo and Juliet (1996) in their own colors. 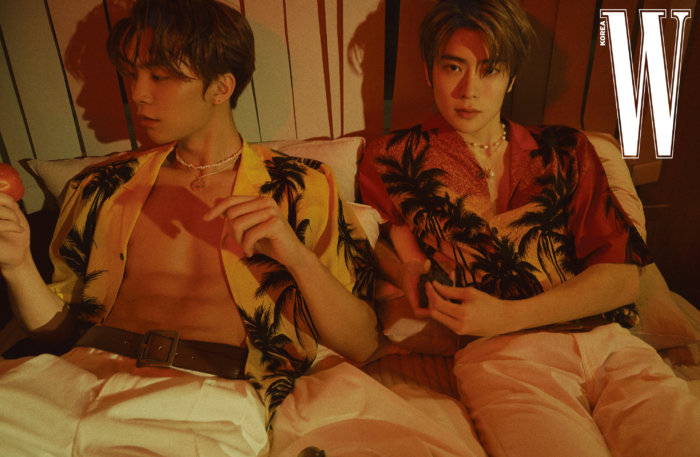 For their recent sizzling photoshoot, Johnny caught fans’ eyes with the rebellious yet chic mood reminiscent of a scene in the movie which he showed, while Jaehyun completed a unique pictorial with his solid physique and photogenic poses which created an impressive look.

Moreover, the two used their unique, free-spirited sense to fashionably flaumt various patterns of clothes. They also brightened the filming scene with energetic energy even in late hours, making the atmosphere around them warm. 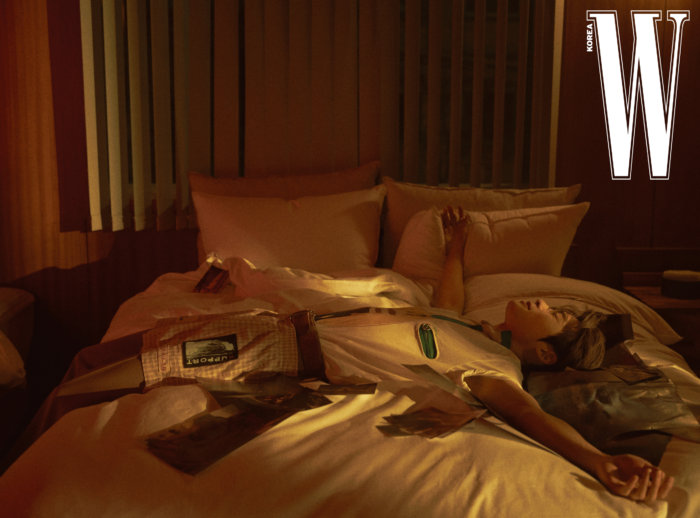 When asked how they felt about playing the role of Romeo, Johnny said, “I felt like I was out to play. The place also felt like a small town in the United States. When I leaned on the bed and filmed, I held a bunch of grapes and danced excitedly.”

After laughing, he added, “Romeo, who I think is honest with his feelings and finally tries to win love. Thanks to you, I had fun shooting today regardless of other people’s eyes.”

Since their “Juliet” is not present at the moment, the boys were also asked to imagine how her look would be like for the shoot, as well as what she would say once she spots them.

“I hope she would dress comfortably. I’m wearing a white short-sleeved T-shirt and creamy jeans on the set today, and Juliet should feel just like that. She’ll come in saying, “How are you?” with her affectionate and fluttering feelings,” Johnny said. 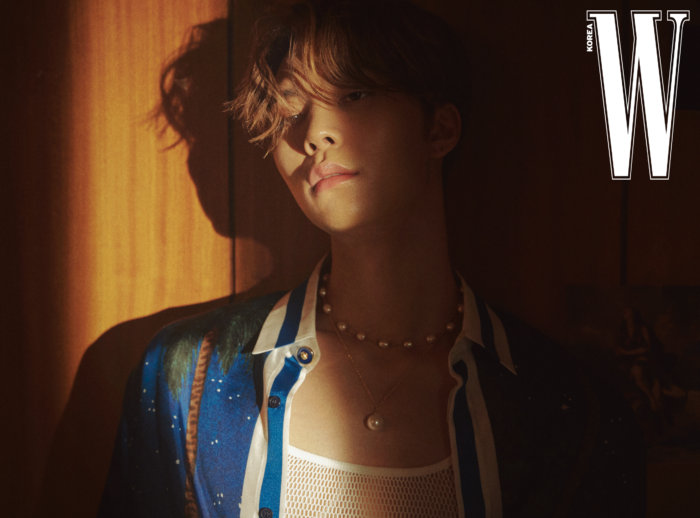 On the other hand, Jaehyun shared, “She’s likely to appear in a white T-shirt and comfortable clothes like jeans, saying a short “I missed you” as well.”

The two NCT members also shared which character they resonated more to in the story of Romeo and Juliet.

“I think I’m more like Tybalt who also wants to be like Romeo a bit. When I decide something, I practice it right away. On the other hand, I want to be honest with my feelings the moment I fall in love, and learn from Romeo’s attitude of trying to be sincere at this moment,” Johnny interestingly quipped.

Meanwhile, Jaehyun said, “Mine’s the opposite of Johnny. I think I’m a Romeo who also wants to resemble the cool, analytical corner of Tybalt. I’m the type of person who usually acts before reason, so if I have to choose between two, Romeo!” 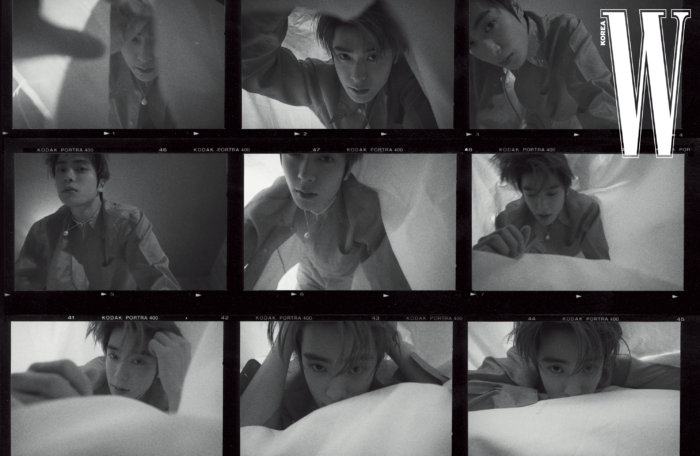 Since the title track “Kick It” for their latest album NCT #127 NEO ZONE actively incorporated Bruce Lee in its lyrics, the two also revealed which movie star they’d want to express in songs in the future.

Johnny first named Brad Pitt from Fight Club, noting that he wants “to try music with a strong beat with the fiery temperament of the fighter”. He also mentioned Will Smith’s character in The Pursuit of Happyness, a film which he said he’d always give five stars to.

“No matter what the twists and turns, it’s a happy ending. I want you to sing with the message that even though it’s hard now, you’ll be happy in the end. Then a slow ballad would suit me, right?” he shared. 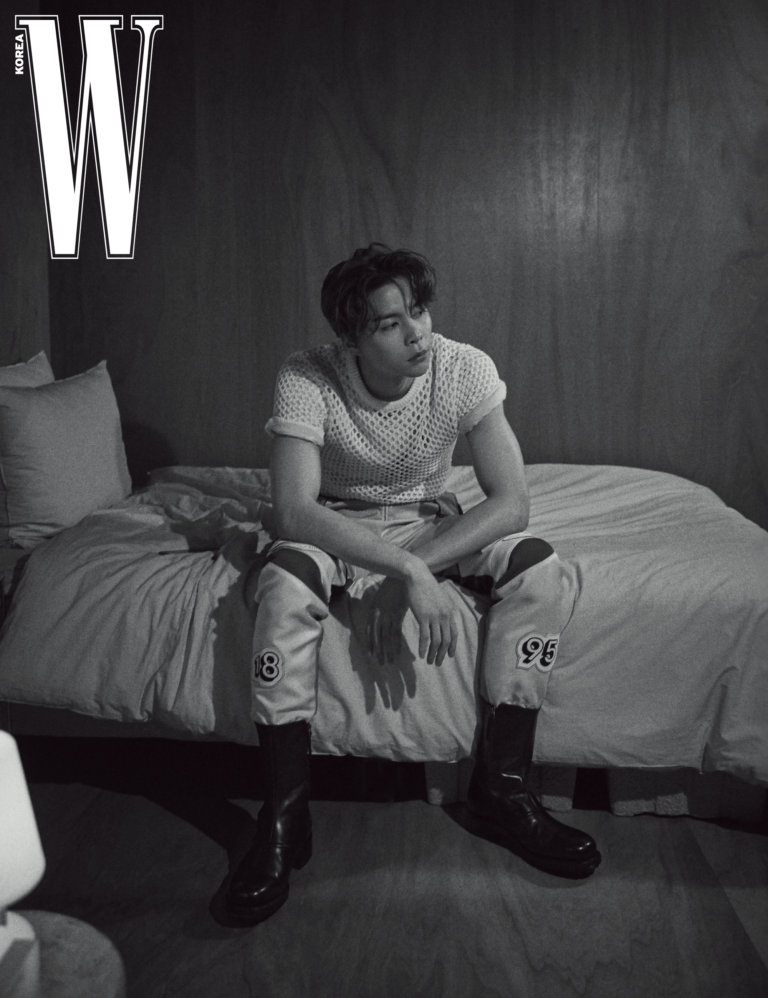 Once again, Jaehyun shared an answer that contrasts his groupmate’s.

“We’ve acted as him today, but Romeo seems to be fun, too. It is a song that calls for love, but it would be perfect if it contains all the joys and sorrows like the movie too. Moreover, when you think of James Dean in the movie Rebel Without a Cause, you can imagine music that spills funky beats based on the old sound of a jazz band. Lately, I’ve been so into jazz, soul and R&B that band sound is a must,” he said. 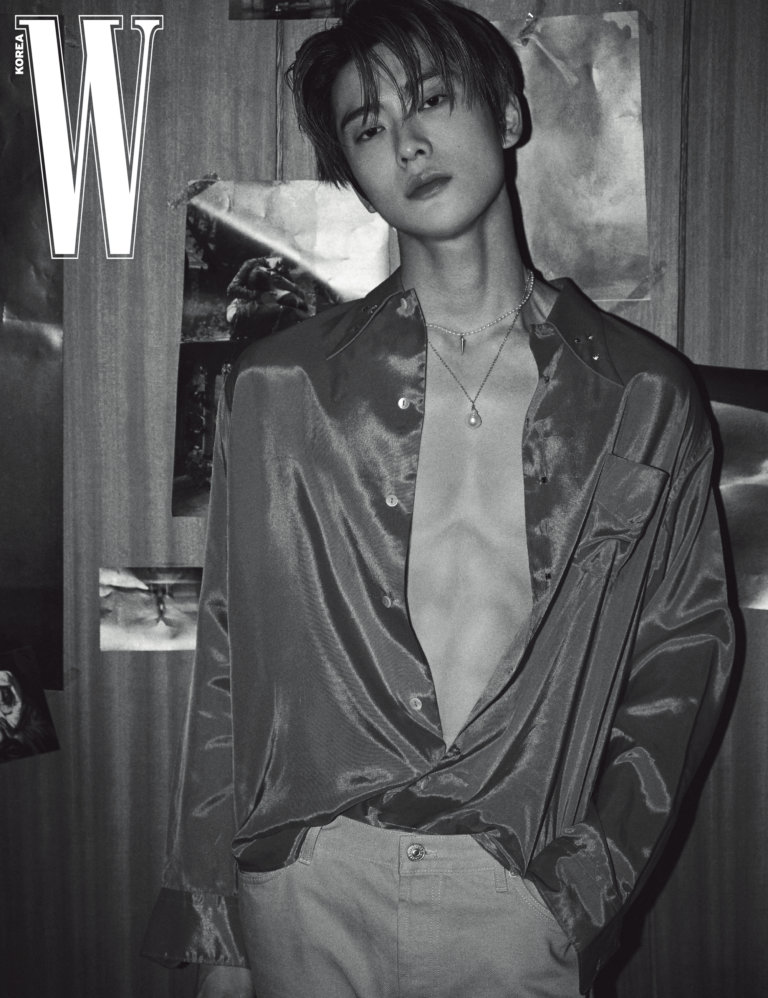 The two also named their personal heroes in life, who may not be as famous as Bruce Lee, but are equally just as great.

“Even though I don’t always express it, it’s my mom. Not only was I an only son, but I was also born late into their marriage so when I was young, my mom was constantly by my side. Looking back, my mom sacrificed herself for us even if she’s someone who thinks that her own happiness is important. I want to become like her in terms of consciously trying to live a fun life,” Johnny shared.

Adding to his heartfelt answer, he said, “My mom is also the one who taught me how to make every moment fulfilling and enjoyable. She always said that it was important to get firsthand experience on things. For example, I spent my childhood in the U.S, and on July 4 every year on Independence Day, I watched firecrackers with my family, and on bright and big days when the moon was shining, I watched the moon outside. Thanks to her, I seem to have grown into a sensitive person.” 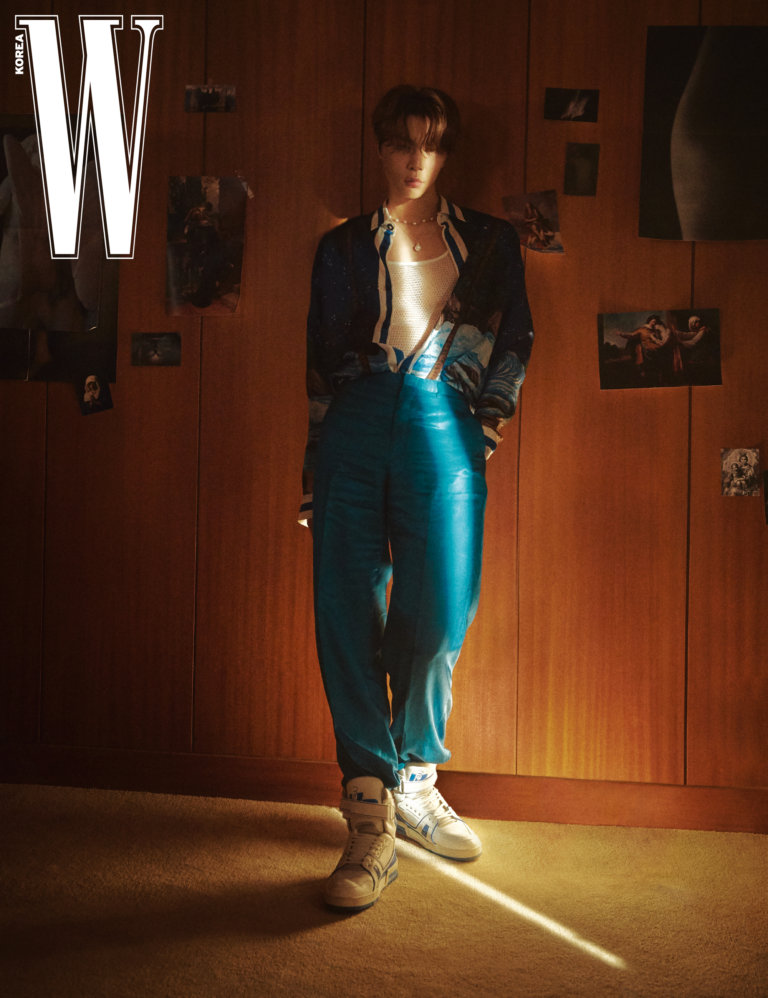 Meanwhile, Jaehyun said, “My grandmother. She’s almost 80 years old but she has been a dancer until recently when she retired. She doesn’t miss out on the broadcasts that I appear in and watches everything. She always sends long Kakao talk messages to me.”

He also noted that since his grandmother is a dancer, she also gives him advice for when he dances. “But what she usually tells me is what mindset I should have as I live my life. I always get advice from my teachers and friends around me, but strangely, every word that my grandmother says seems really striking to me and I can resonate to it well. I really took her advice on not minding what others say, that I should live enjoying what I can now and take things in stride. I still hold those words dear up to now,” the NCT vocalist shared. 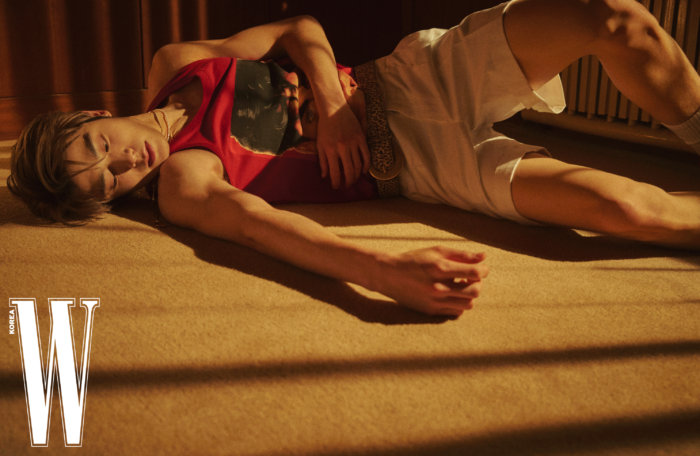 Also, when asked in the interview, “What drives you to support yourself?” Johnny said, “Fans, members and family. Fans are the “reason” that I get to do something. The members are the companions I walk together towards the reason. Lastly, family is the root of it all. Having a place you can return to is something completely different in itself. Family lets you know that there’s somewhere you can go back to, so it’s okay to fall back sometimes.” 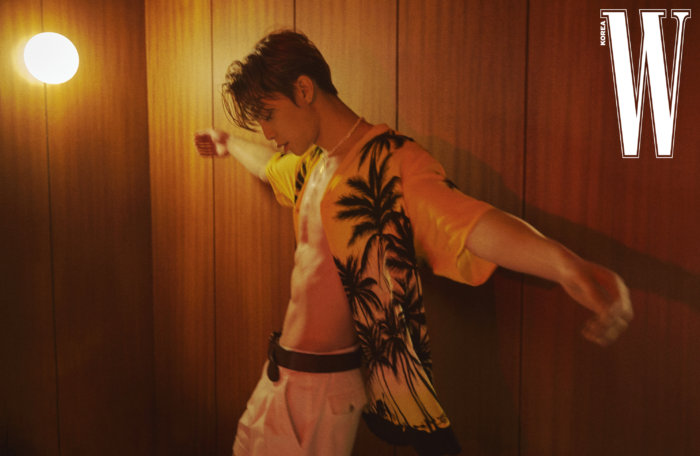 Meanwhile, Jaehyun shared that the reason he could endure during his trainee days was purely because of his love for music. “Of course, I get a lot of strength from the fans who like our music and came to the concert hall to watch our performances. What’s different now is that in the past, relied on the people around me and our “crew”, but recently, I think I found motivation within myself. Whether it is pushing or praising myself, I encourage myself to be more determined and gain my own insights too. In this way, I feel like I’m growing and maturing as a person,” he said. 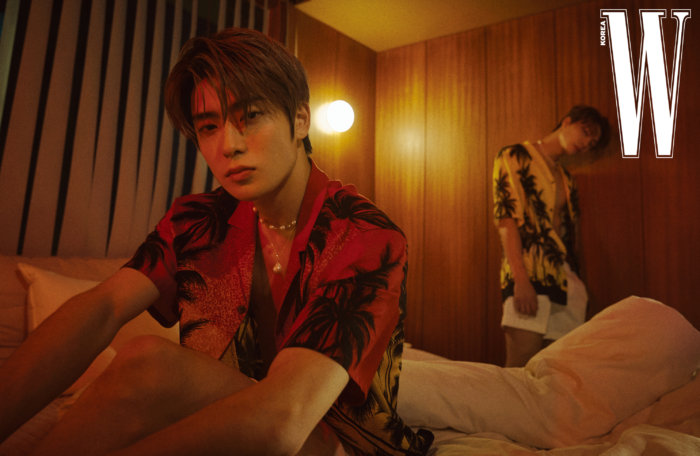 Meanwhile, the full pictorial and interview featuring NCT’s Johnny and Jaehyun can be found in the May 2020 issue and official website of W Korea.