The latest Netflix original is split into four different short films. Lee Kyoung Mi, Yim Pil Sung, Jeon Go Woon and Kim Jong Kwan are at the helm of each of their own segments. Lee Ji Eun, whose screen name is IU, plays the main character for the aforementioned mini films.

Yoon Jong Shin, who is behind Persona, divulges that he has been eager for this project because he wanted to highlight the originality of the directors in the short films. 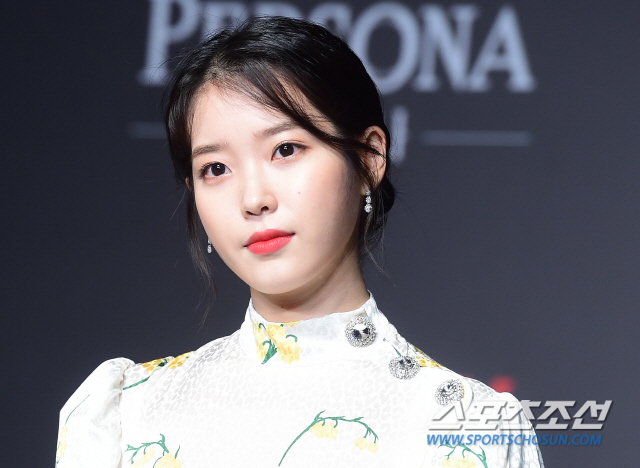 Furthermore, Yoon has praised the female lead because of how the actress breathe life to the varying characters based on the director’s imaginations. Lee tackles four very different personas through each segment of the movie.

Love Set is the first segment in the movie and is directed by Lee Kyung Mi. The fast-paced segment shows Lee as she plays tennis with her tennis rival. Portrayed by Bae Doona, her rival is hinted to become her future stepmother. Underlying tension between the women emanates at a competition that went deeper than a tennis game. In the still released, IU stands on the tennis court with a serious and grim expression on her face. 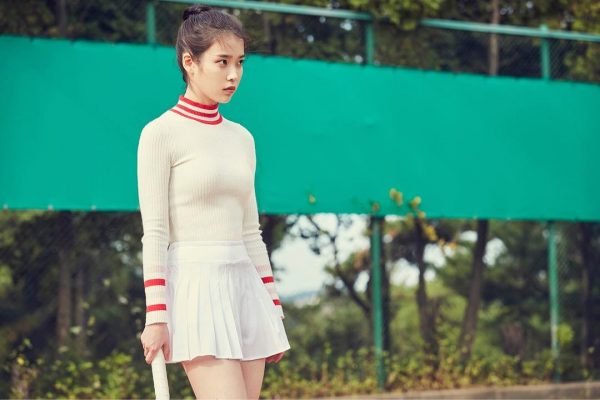 Kissing is a Sin,  directed by Jeon Go Woon, tells the tale of a high-spirited young high school student. She wants to exact revenge on her friend’s unreasonable and controlling father. IU’s character has a friend who had her hair cut off all because of a kiss mark. Shim Dal Gi stars with IU as her oppressed friend. 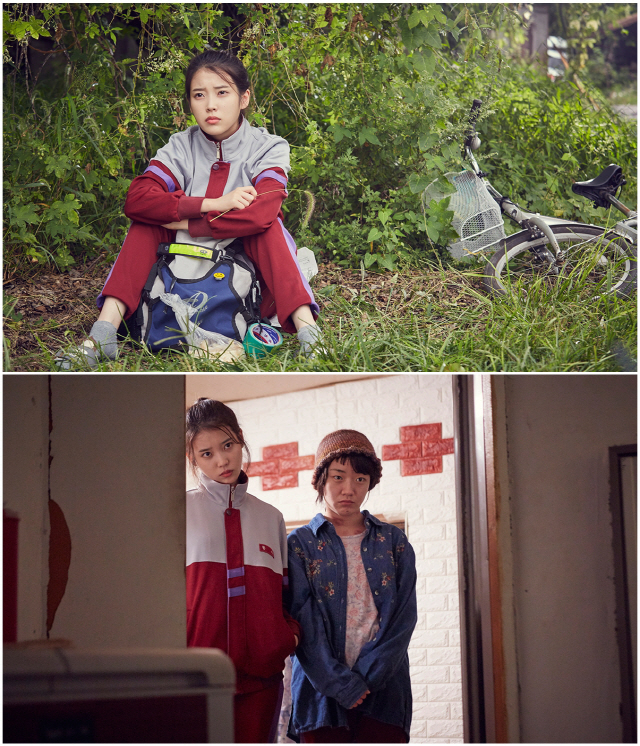 Walking the Night is a sad and melancholic story of two former lovers who go for a walk in the man’s dreams. IU looks both sad and pensive in the still as she holds a glass of wine in her hand. Loneliness seems to be the theme for director Kim Jong Gwan, whose specialty is to delicately direct scenes of everyday life. He likes to highlight every day and ordinary aesthetics. This particular segment is unique on its own since it was shot in black and white. 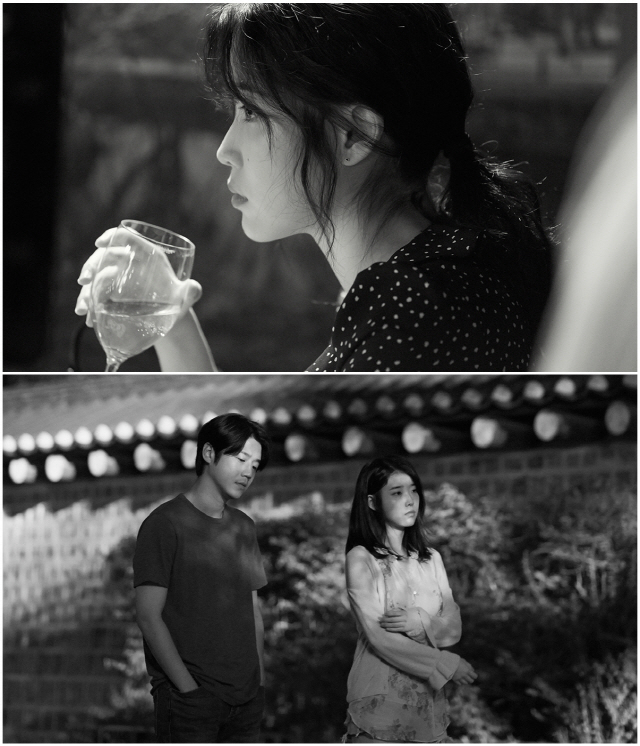 The last segment, Collector, is directed by Yim Pil Sung. IU portrays a beautiful and alluring woman who loves to seduce men with her charm and wit. IU’s character is able to get men to divulge their secrets to her. In the still for Collector, IU is strong and powerful as she models a perfect yoga pose. 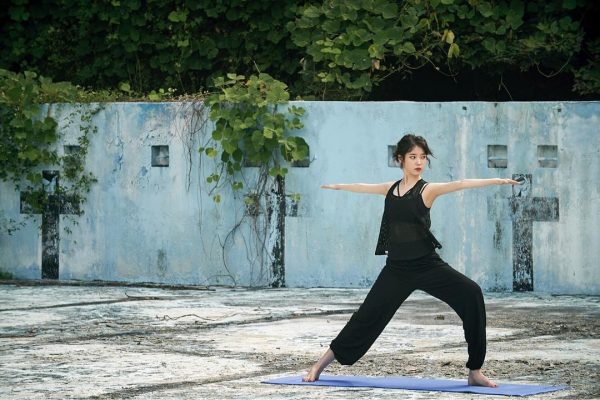 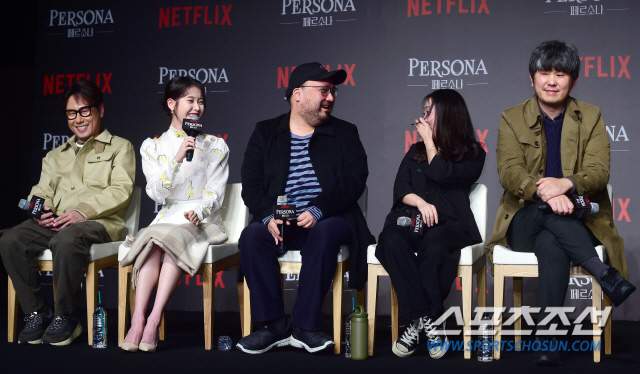 The creator, directors and IU all sat down for a press conference for Persona. Held in the Park Ballroom of the Conrad Seoul Hotel, they gamely answered questions about their segments.

Creator Yoon Jong Shin said, “As the planner, I choose not to appear in the segments. I saw them and thought that they were so much fun. Later on, I met the four directors and told them that each short story is a piece of art.” He also added that their creativity must be highlighted in each of their segments.

Yoon further expressed his gratitude to the actress for agreeing to appear in the movies. Admittedly, he said that the stories for each of the segments were adventurous and therefore not easy, but IU earnestly agreed and did her best.

He also mentioned that he chose Netflix as the platform for Persona because he wanted an “eternal platform.” Yoon wanted the movie to be readily available for people who would like to keep going back to watch it. He mentioned another Netflix original, Black Mirror, and thought that the time would come when he would be able to create something similar. Furthermore, he recalled how much he liked the show and continued to talk about it two or three years later.

The actress said that she felt lucky with the project. She did not have any mentors, but she was able to voice out her opinions without fear. Improving her craft is extremely important to her, so she strives to try out various roles and makes an effort to improve on areas she feels she’s weak in.

At first, IU did not have any idea that Persona would be such a big project. But upon making the film, she promised herself that she needed to work hard. In addition, she was amazed at the concept of her movie premiering on Netflix.

Director Yim Pil Sung is impressed by IU’s versatility. He feels that she went beyond the musician that she is, as she immersed herself in her characters.

Love Set was particularly challenging for the actress. IU was not familiar to anger and resentment so she had to exert effort in familiarizing herself. Not only that, she also had to learn how to play tennis, which made it harder for her. The warm weather on the day of filming took a toll on IU as well.

Because of IU’s early debut, she has very little memories of her high school days. It was a new experience to her when she wandered everywhere wearing her school clothes for Kissing is a Sin. Also the director  was not familiar with IU or her previous projects, he did his best to motivate her. He credits the righteous attitude of her character as she dealt with her friend’s violent father to IU.

The Walking the Night director also mentioned that he wanted IU to feel the loneliness of her character. The director wanted IU to understand what kind of emotions are triggered after a painful separation. 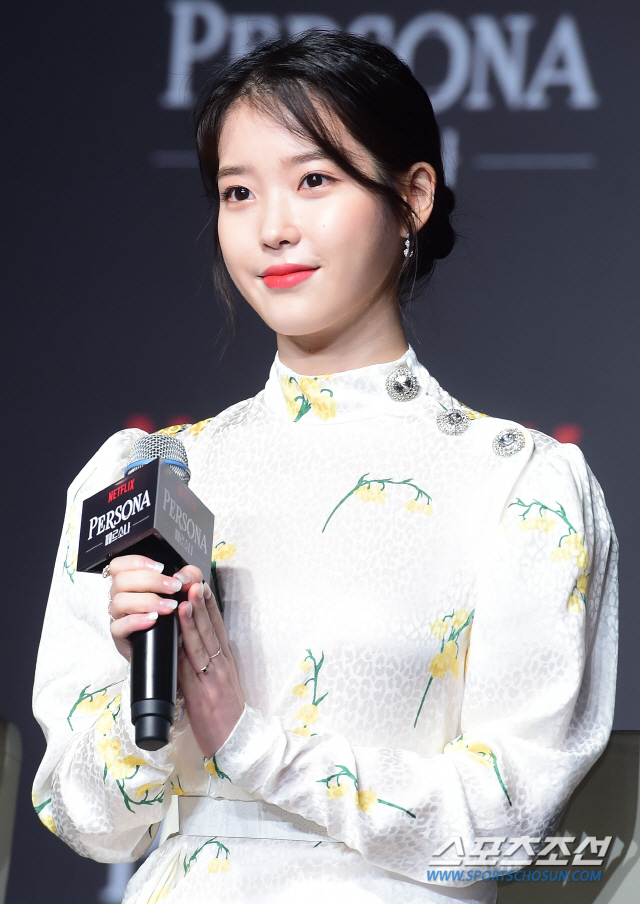 Aside from being a musician, IU has created a niche as a respected actress. She last worked on acclaimed tvN series My Mister. Touching themes of abuse and self-defense, IU portrayed a woman who had endured heavy burdens in her life. She meets a man in the company they both work in, and eventually created a connection with him. IU earned praises for her portrayal of an abused woman who struggled to stay strong despite all the cruel things that have happened to her.

Another popular role, the singer-actress worked on was Moon Lovers: Scarlet Heart Ryeo in 2016. Her character, Hae Soo, travels back to the Goryeo Era and falls in love with Wang So.

Aside from Persona, IU is also getting ready for her next drama, Hotel Del Luna, opposite Yeo Jin Goo. This drama is slated to premiere in the second half of 2019 on tvN.

Originally set for April 5, Persona’s premiere was delayed due to the Gangwon Province fires. Persona will begin global release on April 11 via Netflix.