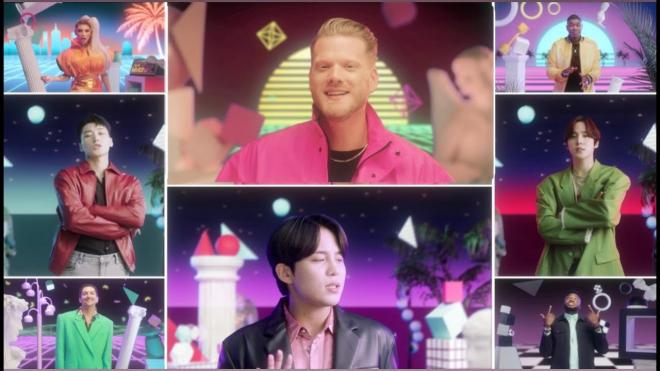 On Hellokpop Playlist: ATEEZ And Pentatonix Ask For “A Little Space” In Their Upbeat Collaboration

ATEEZ have had a busy summer so far, resulting in a variety of projects including collaborations. The members most recently worked with the Grammy award-winning acapella group, Pentatonix. ATEEZ’s Yunho, San, and Jongho participated in a remix of Pentatonix’s track titled, “A Little Space”.

While collaborations between Western and K-Pop artists are becoming increasingly common, “A Little Space” is its own type of special, demonstrating an unforced and natural chemistry between both artists as they come together in a celebration of song.

Pentatonix are a five-member group, dominating the acapella scene. Due to their harmonizing talents and excellent production, they have won three Grammy Awards so far, becoming worldwide artists. ATEEZ caught their attention, and the group began reaching out for a collaboration.

KQ Entertainment announced their project by explaining, “Pentatonix, who was impressed with ATEEZ’s global activities and online influence, sent a love call first and gladly collaborated.”

“A Little Space” depicts a candid message, communicating the struggle of someone needing space from their partner in a relationship, after moving too fast.

Though the lyrics may be bleak, its upbeat tempo and easy-listening matches the main intentions of the song: the space required is not a rejection of love, rather, in protection of it. The track expresses the concern one feels for the pace of their relationship, wanting to slow it down to ensure their love remains successful.

ATEEZ paid homage to their roots, opening the song with Korean lyrics as Yunho sings, “It came like a wave /We lost our minds because of each other/ We fought like fire/ So much that our love turned to ashes.”

The acapella track highlighted not only ATEEZ’s singing strength, but also the their unique vocal colors. Between Yunho, San, and Jongho, ATEEZ’s versatility shined. Notably, the line distribution between both Pentatonix and ATEEZ was consistently shared throughout the song, rather than limiting the feature to a verse. As such, the chemistry between artists was seamless.

Perhaps this also adds to the magic of the project; Pentatonix’s acapella expertise facilitates a true collaboration. From the harmonization in the verses to the choruses sang in unison, “A Little Space” becomes a shared place where artists work hand-in-hand. The track in whole becomes fuller, a song that remains dynamic and engaging after every listen.

Though the music video was filmed separately, the artists’ cohesive teamwork translates well here too. Both ATEEZ and Pentatonix deliver a fun watch as they sing along to the track, connected through their mutual enjoyment of the song.

As fans of both groups come together in praise of the other, it’s clear that this collaboration was a wonderful opportunity to enjoy the shared love of music.