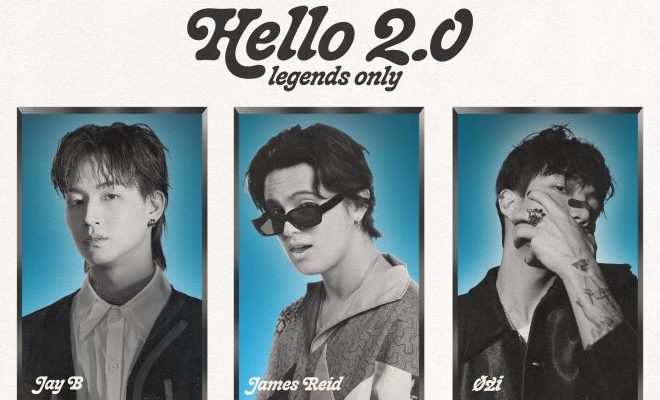 With a combination of three languages, English, Korean, and Mandarin, the track is a celebration of how music transcends language and limitations. Moreover, as its title suggests, “Hello” sends a warm greeting to global listeners. In doing so, the song emphasizes the importance of relationships during the isolating time of the pandemic.

James Reid continues to gain global traction as a Filipino-Australian actor, singer-songwriter, and record producer. The artist is most known for his neo-soul pop and R&B styles. However, the artist took a groovier turn with “Hello”, a funk pop-dance earworm.

The track opens with lyrics from the original song which describe the power of greetings and how they can form the roots of relationships. Subsequently, JAY B and ØZI make their entrances into the songs, expressing their own methods of greeting others.

The group chorus punctuates the cheerful, celebratory vibe of the song, making “Hello” an instant replay in playlists.

Celebrating Music Across The Globe

Regarding the release, James shared, “Asia has a lot to offer in terms of music so I’m grateful to have a project like this in which the big idea is a collaboration between different Asian countries.” The track’s foundations lie in the unity between artists from Seoul, Manila, and Taipei, highlighting Asian talent and narratives.

JAY B expressed his own excitement for his participation in the song. He shared, “I’m grateful to have the opportunity to do this cool collaboration and happy to have a fun project with James Reid. I hope that there will be many great collaborations with artists from various countries in the future.

Starting with this collaboration with James, I also want to show myself to fans from various countries with more artists, various performances, and songs”.

Meanwhile, ØZI also spoke highly of the project, stating, “It’s a pleasure working with James and Jay B. Love the energy of the record. Hope we can all get together and perform the song together in our cities in the near future.”