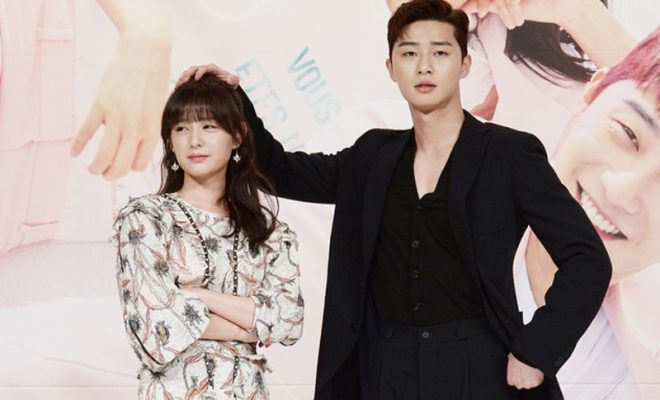 Park Seo Joon On Kim Ji Won’s ‘Descendants Of The Sun’ Character: “I Can’t Forget The Scene When She Kissed [Jin Goo] In The Army Dining Hall”

Park Seo Joon gave his co-star awesome compliments but misses her past kiss the most.

Park Seo Joon recently carried out an exclusive interview with a local outlet, which he shared some honest feelings about actress Kim Ji Won, his co-star in the their latest drama Fight for My Way.

When asked about the dating rumors between them, the heartthrob denied with a smile, saying: “I didn’t know her before ‘Fight for My Way’.”

Park Seo Joon also gave compliments to the actress for her role in the well-known mega hit drama Descendants of the Sun: “I enjoyed watching ‘Descendants of the Sun.’ In that drama, Jiwon is a girl-crush character. I can’t forget the scene where she kissed [Jin Goo] in the army dining hall. When I saw it, I thought, Wow! A modern woman! She is a fine woman!”

He continued: “We met before we decided on the drama since we’d have worked alongside each other. But she was worrying too much because it was her first leading role. She was full of worries. But all those worries… were gone as we were shooting.”

Park Seo Joon shared more about working with Kim Ji Won: “As we were shooting, we had many conversations about Aera as well as Dongman. Besides the romance, each character’s development was just as important. She had to shoot a lot of scenes overnight. She did it so well, and I was impressed.”

To close the interview, he expressed his hope to cooperate with Kim Ji Won once again in the future: “Personally, I liked working with her a lot. I would like to meet her again in another work. Maybe a few years later, I wish we could do another work together.”

He added: “The rumors of us dating arose probably because ‘Dongman(Aera), I love you’ was written on our scripts. It’s my habit to exchange words every time I finish a work. It’s like a rolling paper to me.”