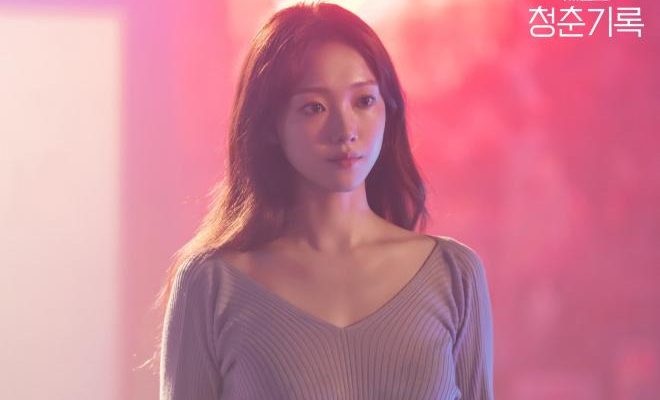 In the episode 12 of Record of Youth, Hye Jun finally realizes the severity of the bad rumors about him.

While he’s still the talk of the town, Hye Jun chooses to deal with the hate he receives all by himself. As much as he wants to shoulder those burdens on his own, its getting difficult for him to protect his loved ones.

As Jia rings Hye Jun telling him that she’s sorted out the rumor, Hye Jun got angry at Hae Hyo for not telling Jia’s involvement. Though he has pure intentions in helping, Hye Jun was disgruntled to Hae Hyo.

In return, Hae Hyo calls him ungrateful and voiced out that he has changed. From that conversation, Hae Hyo learns that Hye Jun knew about Jin Woo and Hae Na’s relationship. Angered for being betrayed, Hae Hyo walks away furious.

Avoiding her mother’s reprimanding, Hae Na holds off Yi Young’s calls and sneaks out of the house. Before even stepping out, Mom asks for her time to talk about something. Though at first concerned of having to break off their relationship, she’s surprised that Mom approved of her dating Jin Woo. But, Yi Young stresses that there should be no marriage and she can’t get pregnant.

The condition riles Hae Na, but Yi Young expects her to listen, like how she used to follow her parents back in the day. Still showing her disclaim, Yi Young then takes away her car keys. With a taunting smile, she congratulates her daughter for entering the real world.

To release all the stress away, Hye Jun hangs out with Jin Woo for some beer at a pub. They talked about his postponed enlistment, as well as his upcoming drama with Hae Hyo. Upon bringing up Hae Hyo’s name, he’s reminded of their argument over Jia’s interview. Then Jin Woo asks if Jeong Ha happened to see it, and he looked shock like he’s forgotten about it.

Calling into mind their own dispute to Hae Hyo, they meet him to sort things out. As they head out of the restaurant, the two are suddenly stalled by two women asking for pictures. True to his character, Hye Jun agrees, as long as they promise not to upload it online. However, soon as they leave the store, they post the picture with the caption “Hye Jun was drinking with his boyfriend”.

Soon as they reached the park, Hye Jun pushes Jin Woo towards Hae Hyo. Cutting to the chase, he asks why he kept their relationship a secret to him. Jin Woo replies he doesn’t have a death wish, and then laughs.

As Hae Hyo gestures his fist, Jin Woo offers both his cheeks, but instead of punching him, Hae Hyo pushes him. As he falls on the ground, Jin Woo cries for Hye Jun who is nowhere to be found.

As Jeong Ha refuses Hae Hyo to have a dinner night, he heads home to watch her live broadcast at her channel. Hae Na hurriedly shows her brother the clip of Jia’s interview, but he says he’s more interested in Jeong Ha’s live video.

Titled, “Confession,” her followers commented on her broadcast if the topic will be about her boyfriend, and she admits it. While recording, Hye Jun suddenly calls. She halts the video and talks to him. He apologizes to her about the article, and for not telling her immediately before the news has been published.

At her broadcast, before she even spills her confession about his boyfriend, the viewers left to tune into Jia’s interview about her past relationship with Hye Jun. Unable to revoke her statement earlier, she calls her fans her boyfriends and offers them a voucher to her salon.

Taking Jin Woo’s advice, Hye Jun visits Jeong Ha. They talked about how his friends are complaining for spending time with his girlfriend and not paying attention to them.

He learns that Hae Hyo’s visiting and helping with her business often times. Worried that he might take his spot, Jeong Ha guarantees that he’s her number one.

When Hye Jun asks if she watched Jia interview, Jeong Ha openly asserts that she felt bad about it, and asks why he never tell those things to her as they are in a relationship. Hye Jun replies he wants to show her only good things.

She then encounters his statement and gets angry for treating her like a child, like what parents do to their children. Jeong Ha explains that the people he loves want to share the burdens and pain. Realizing her sincere thoughts, Hye Jun softly tells her that he loves her more than she thinks.

From this part we can see from the dark Lee Sung Kyung, who plays the role of Jin Seo Woo. In the scene, she gracefully and dramatically dances in a studio when Hye Jun suddenly enters. She pushes him away, but Hye Jun boldly walks towards her, pulls and hugs her. Until the director shouts cut!

Right after, the two actors laugh and joke around. He noticed that her make up needs some retouch. Seo Woo explains that her actual makeup artist is on the leave, while she’s being attended by a new artist. He remembers Jeong Ha upon hearing that and offers her to introduce someone good. From a distant, a camera is filming their moment while she hands her phone and Hye Jun types for her Jeong Ha’s number. We know this might cause another rumors, again!

During their break, the three friends stroll the area. Hye Jun’s co-star Seo Woo abruptly calls, and Hae Hyo asks if it isn’t embarrassing playing lovers. To Hye Jun’s surprise, Seo Woo nonchalantly remarks that the two of them are dating.

Bothered by her joke, Hye Jun worriedly glances Jeong Ha to see her reaction. Meanwhile, she tries her best no to look untroubled by her statement. To somehow ease her girlfriend’s worry, Hye Jun asks Hae Hyo to take a picture of them, in order to commemorate the moment.

“Faith is more fragile than love”

On their way home, Hae Hyo offers Jeong Ha a ride to her gig tomorrow, but she declines. The next morning, as her alarm rings, she gets up and prepares on her way to the filming set. In the bus ride, she receives a text from Hye Jun where their picture was attached. The message says, “You, who I have by my side, are always the best.”

Smiling faintly, Jeong Ha narrates, “Out of sight, out of mind. Not being within eyesight makes someone grow distant. I had faith that our relationship was solid. But faith is much more fragile than love.”

The cold and Gloomy Rain

On her gig, the actors and the staff has yet to finish filming. At the car, Jeong Ha retouches her actress’ makeup while she seems to be in a bad mood while texting someone on phone.

Jeong Ha asks her to lift her head, but she tells her not to bother too much. Sticking to her work ethics, she kindly explains that those little blemishes show up on screen which the actress complies. She’s obviously having a hard day.

By the time filming wraps, it’s starts raining. While we see Hye Jun sleeps in the car on his way to the airport for his fan meeting, Jeong Ha shelters at a bus stop. Feeling cold and alone as the rain blows in her face and shivering body, Jeong Ha recalls Hye Jun’s promise of calling her during rainy days to remind her that she isn’t alone. At the thought of calling him, the scene shifts to Hye Jun in the plane unable to answer the call.

As she stands alone the shed, the person that we thought of came — Hae Hyo. With an umbrella, he goes to Jeong Ha and hands her one too. Without a word in the car, he drives her home. They arrived and she invites him inside. As he enters Jeong Ha’s home for the first time, the mood starts getting mysteriously unusual.

This episode of Record of Youth highlights the bitter realities of being in the limelight and in an entertainment industry generally. We also see how the tables have turned for Hae Hyo and Hye Jun, though the latter is currently on a rocky path. However, given that situation, Jeong Ha is drawing closer to Hae Hyo, now that Hye Jun’s busy with his career and dealing with the rumors surrounding him.

Honestly, at first I thought they’d become somewhat rivals as actors, considering Hae Hyo’s potential and his mom’s power and connection within the industry. But the drama seems to navigate on a more personal rivalry.

Looking how this chapter ends, the romantic tension slowly building up, as Hae Hyo enters into Jeong Ha’s home, foreshadows the increasing gap between the couple’s relationship.

She even clearly stated before that she wants stability in a relationship, which Hye Jun seems to forget. But on a positive note, we can hope Jeong Ha does not get swayed by her emotions.

Although she’s not harboring feelings for Hae Hyo yet, I think Hye Jun’s decisions and actions will become a pivotal factor to where their relationship ends up.

Lastly, I just had to quote, Lee Sung Kyung is really stunning here! Plus, her character is a vital element to test Hye Jun and Jeong Ha’s relativity and trust to each other.