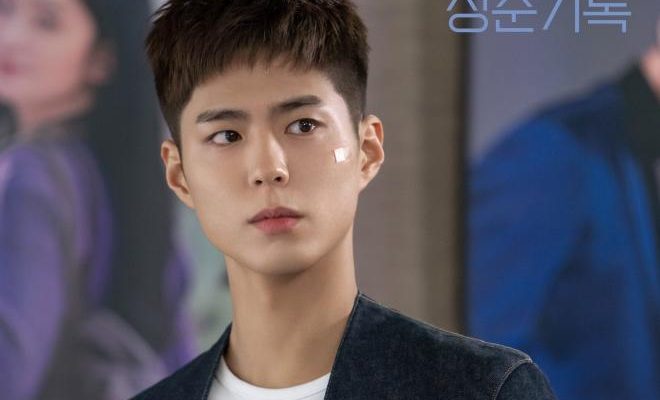 Our main characters, Sa Hye Jun and Ahn Jeong Ha, has remained driven in fulfilling their dreams despite the hardships that came along their way.

Settling with extreme disappointment, Sa Hye Jun (Park Bo Gum) became firm with his decision on enlisting in the military. Meanwhile, Ahn Jeong Ha (Park So Dam) is still in conflict with her bully co-worker. With all the stumbling blocks hindering them towards their dreams, the two has continued being each other’s support system. 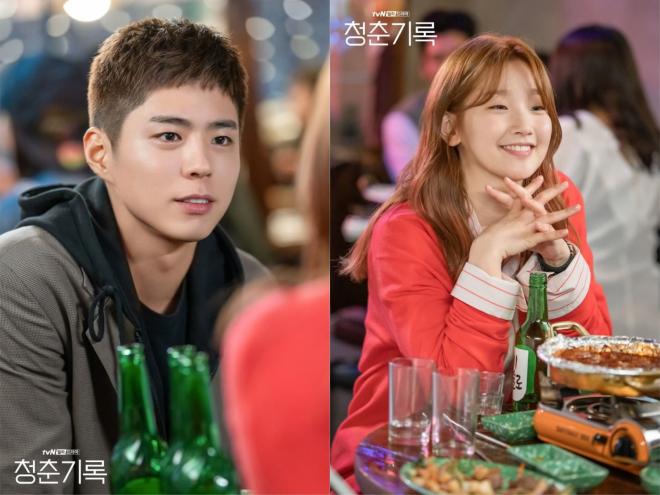 After learning that the photoshoot was intended for Hae Hyo (Byeon Woo Seok), Hye Jun’s confidence hit its lowest point. Still having a hard time accepting his friend’s support, Hye Jun declines going with Hae Hyo in meeting their friends.

Meanwhile, Yi Young (Hae Hyo’s mom) returns home after golfing and complains that she’s getting sick of the activity. Ae Suk (Hye Jun’s mom) then commented, “It must be nice to get sick of doing something fun.” She further tells her that she should be thankful of the luxury she has been enjoying.

Yi Young claims that both of them are not friends though their sons are. She suddenly brings the topic of Hye Jun’s enlistment, and remarks how disappointed Ae Suk might be with the audition results, and then brags about how his son got the movie role.

While promoting Hye Jun to entertainment companies, Min Jae learns that Hye Jun lost the role to his friend because of popularity. Though she is trying to build his esteem for acting, Hye Jun has already decided to enlist, and says that popularity is also a skill that he lacks. 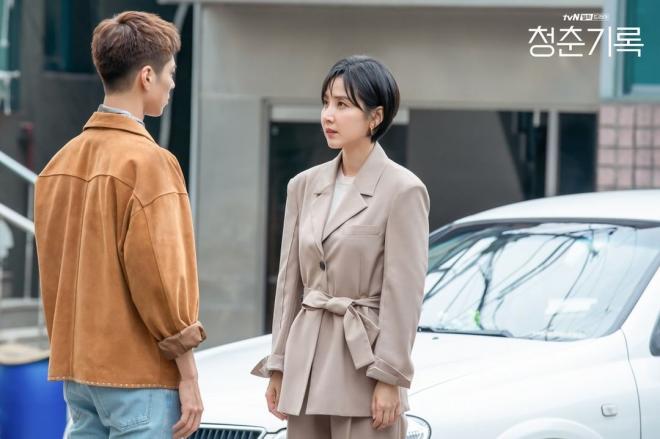 Both feeling down, Hye Jun and Jeong Ha meets up at the bookstore. He explains that he goes there whenever he is depressed. When he invites Jeong Ha in a coffee shop, his treat, she says that she’s firmly against wasting her money or even other’s.

After convincing Jeong Ha, they go inside the café, and Hye jun receives a video call from his grandpa, asking about the work he asked about the other day. He then includes Jeong Ha in the frame and introduces her as his friend.

After the call, Jeong Ha complimented how handsome his grandpa is, and Hye Jun shows her some old pictures of his grandfather. Jeong Ha tells him that he can be an actor because of his good looks and great physique. 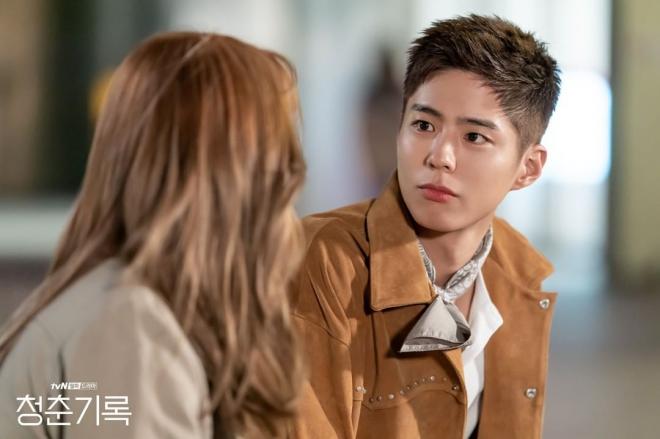 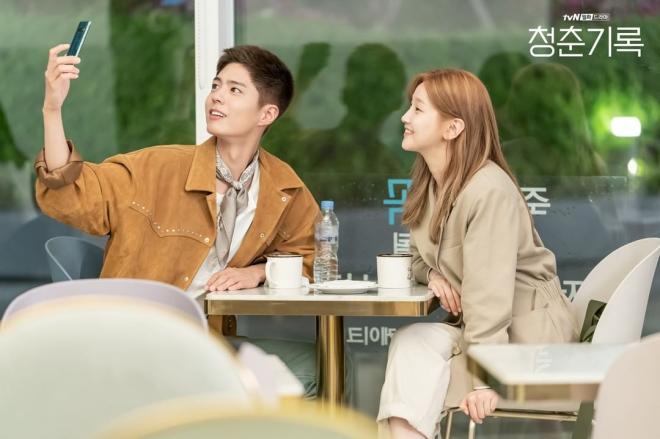 After meeting with Min Jae, Hye Jun decides to have dinner out with Jeong Ha. The two start telling their burdens while drinking heavily. Eventually Jeong Ha admits that she fangirled over him in the past, but she will not anymore.

As they leave the pub, Jeong Ha receives a call from her bully co-worker Jin Ju. Suddenly, she becomes disheartened and starts crying about receiving such hate from her colleague. She told him that she doesn’t understand why some people would bully another person without any reason. 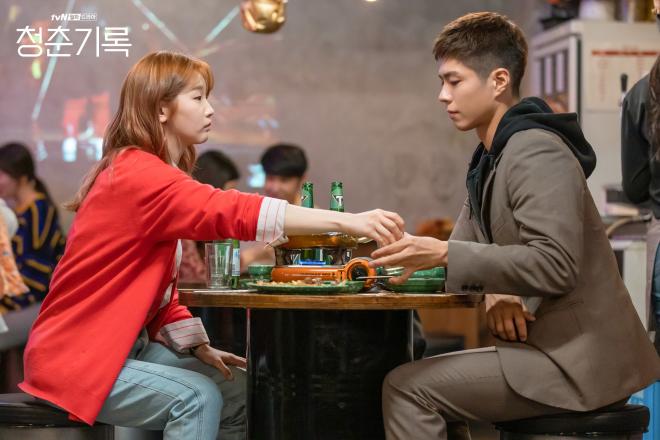 Continuing the next chapter of his life

Min Jae continues persuading Hye Jun not to enlist. They meet for lunch and delivers the exciting news to him. She manages to bag a brand new film script from Director Choi Se Hun’s drama series. Though he got a small role, Min Jae thinks that this might be his last resort to break into the movie industry. 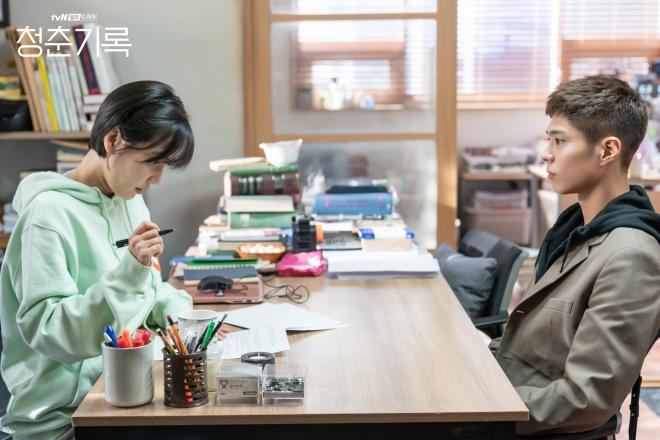 After finally agreeing, he told his mother about the role he got, only to be discouraged, like what his father and brother did to him. But it seems like no one can stop Hye Jun, and he’s finally determined to do something at last.

Meanwhile, the next scene spans into the actual filming site of the series. There, Min Jae and Hye Jun met his boss ( Lee Chang Hoon) from the modelling agency and actor Park Do Ha (Kim Gun Woo, Episode 1) he once worked with as his bodyguard.

Though the series features Park Do Ha as the protagonist, Hye Jun has the upper hand as the rich  mafia (sort of) boss.

The filming exposes Do Ha beaten into pulp, when right at that moment, Hye Jun shows up at the run-down warehouse with several men in black suits escorting him to Do Ha. While being perfectly immersed into his role, Hye Jun starts improvising lines and action scenes, which the director likes. Then, he decides to follow his idea.

Check out his impressive acting below.

So far, Record of Youth episodes 3 & 4 have presented quite its supporting characters, but the background of our heroine is still unclear. We can expect that hers might be pivotal to the other characters, that her story was “saved for last because it could be the best”.

Though we are introduced to their fangirl-celebrity idea, it comes surprising how both of them easily clicked, and had already established friendship in such time. I can also already feel the small tension between Park Bo Gum and Byeon Woo Seok, who will fight over Park So Dam, in the near future episodes.

Quitting isn’t in the main leads’ dictionary, and that can be the important lesson we can learn from them, for now. Although he still finds it hard to cope with what’s in front of him, Hye Jun continues making positive decisions, which feels satisfying to watch.

Showcasing a minimal plot progress, the scenes of Hye Jun family’s lack of support became repetitive. But fret not, because we are served by the adorable and heartwarming grandpa-grandson tandem of Park Bo Gum and Han Jin Hee.

Now that the director of the movie he starred in liked his improvisation of lines, we can already see his career starting to bloom. For now, the drama bows out this week with the resolute hearts of both leads realizing their goals, and with a little sneak peek of their budding relationship.