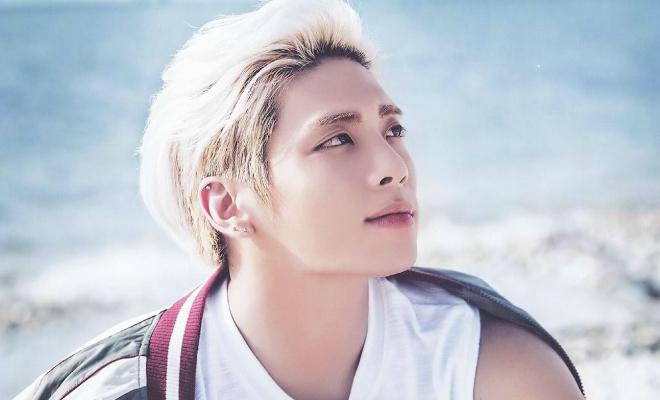 Because when you’re feeling Lonely at the End of A Day, listening to Jonghyun’s voice is the Only One You Need.

Three years after the heartbreaking event, let us all listen to some of his songs while remembering how Kim Jonghyun provided the warmest comfort and solace that will last a lifetime.

Members of the SHINee World fandom best know Jonghyun as a sensitive and brave person. He was vocal with his thoughts and opinions even though it would bring controversies. And he wouldn’t mind at all as he believes there’s nothing wrong as long as no one is getting hurt.
Additionally, his sincerity and warmth especially when interacting with fans were adorable. Luckily, fans had an opportunity to experience Jonghyun’s warmth through his radio show Blue Night which lasted for three years.
So for those who missed Jonghyun’s voice from his radio show, here’s a collection of the three songs he composed as Blue Night‘s logo song.

“You did a good job today”

During Jonghyun’s Blue Night, he would always offer consolation and comfort to his listeners. He would give advice from real-life experiences, making it more sincere. He even had a segment wherein he’d share some self-composed songs especially for Blue Night listeners as it was all inspired by their stories.
Notably, the title track from his Story Op. 1 collection album, “End Of A Day,” was dedicated to his listeners and to give comfort to those who worked hard the whole day and are coming home exhausted and drained.
Also, he was inspired by his lovely dog Roo as she tickles him in the ears whenever he gets home. Through “End Of A Day,” Jonghyun wished everyone will have someone like Roo to comfort them and give a gentle pat on the back, saying “you did a good job today.”

“I’m used to holding it in”

“Lonely” is a somber ode to a person’s long-felt feelings of isolation even if he’s surrounded by many people. In the music video, Jonghyun was seen monotonously doing his everyday routine. With constant absent stares, there’s a scene where he is resting inside a bathtub, tallying on his right arm.

Even though the song features Taeyeon, she is not seen in the music video which adds the extreme emotion of loneliness. Then, as the song comes to an end, Jonghyun’s right arm gets shown with a tally count of 28, symbolizing the years he had felt alone.

The song conveys a heartfelt message that a person isn’t happy for a whole 365 days. There are times when a K-pop idol would want to break down in tears. But, they are worried if fans or the general public would understand where they are coming from.

So they would just keep the emotions to themselves until they get used to holding it in. Just like everyone else, we don’t know a single thing behind an idol’s life when they go back to their empty homes, filled with loneliness.

As Jonghyun had said on one of his episodes in Blue Night:

Jonghyun mentioned that “Elevator” was one of the first songs that made him cry while writing the lyrics. So whenever this song is played, we can’t help but shed tears as well while attentively feeling the emotions of the song. It was like every line speaks to our hearts, telling us that it’s alright to tell someone we trust about our hardships and pain.

It’s actually assuring to have just a single person whom you can tell all your feelings at the end of the day. Someone who will listen to you when you rant about your bossy manager, or when you saw on the streets your high school bully. For each of us, there will always be this one person who can tell us “It’s okay. Tell me everything, it’s okay,” without any judgments.

I know you know
All the bad stories of the world
But you don’t know me
Even though we shared a breath our whole lives
You don’t know, don’t know

Sadness is always in our lives. As Jonghyun said, a person cannot be happy for the whole year and there will be days where your emotions will hit rock bottom. The song compares a person’s life to the petals of a Dyiphylleia grayi, conveying the message that pain and sadness aren’t always seen if you just take a minor look at it.

Every person has down days even though you always see them smile, so let’s all try our best to understand other people’s feelings and bear in mind to always respect their emotions.

There are things in life that are visible but we cannot avoid. But there are also things that are with us all the time and are invisible. Just like the petals of a Diphylleia grayi.

“I’m exhausted from this world”

Listening to this song may lead us to a heartbreaking cry, especially after the tragic event that happened three years ago. The song’s lyrics is a call for help for someone to hold and wipe the painful tears away.

But make sure that you will find your way out of that darkness with the help of someone who understands your feelings and the agony you’re carrying behind your back. Or because of your courage to conquer your challenges. Remember that you are strong.

In this song, Jonghyun shares that love is an amazing feeling. How someone can feel safe as long as they’re in love. “Love Is So Nice” conveys the message that love is powerful. That whenever a person goes, or whoever he meets on the way, in the end, he will always find himself looking for that someone over and over again.

December 18, 2017 was a day when shock and disbelief surrounded everyone’s minds. Unexpected news announcing the death of SHINee’s vocalist brought the nation into sorrowful mourning. It has been three years. But forgetting is never an option instead, we will always remember.
We will always remember how the songs of Kim Jonghyun comforted and gave solace to our lives. How his Kim gentle and loving words inspired many to do their best and reach their dreams.
We will always remember how his music became a shoulder to lean on during the saddest hours. His remarkable masterpieces will forever remain not only in our minds but also deep in everyone’s hearts.