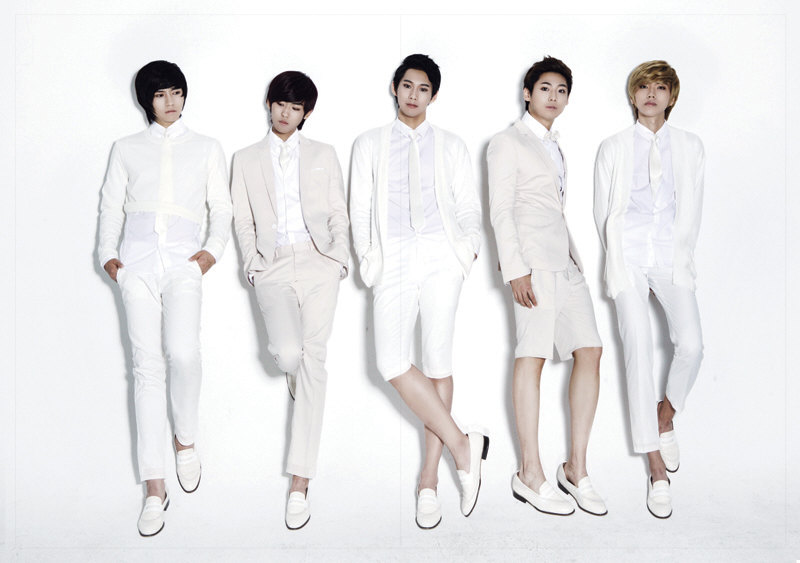 New label Pure Entertainment is supporting the reunion of the original boyband TVXQ. Their goal is to perform 100 shows at Seoul Myungdong’s concert hall titled Pure K-pop Live, just like a relay concert.

In the performances, the five members of new idol group and main characters of Pure are; white Soohyuk, pink ChanHui, black Jimin, blue Jungbin and yellow Younghoo. The members have been fans of TVXQ for a long time and for another similar reason, Pure Entertainment’s president brought these members together as a group, to dedicate to fans who have been missing TVXQ as the original five.

This special concert is held thrice a week and the official fans of TVXQ and Girls’ Generation are granted free admission. The small profit that they make will be donated to an organization called Fruit of Love (사랑의 열매). The charity album Standing Together (함께) is available on iTunes in Korea, English and Japanese versions. The profits made from the music sales will also be donated to the Fruit of Love. You can purchase from iTunes here.

Leader of Pure white Soohyuk stated, “I’m very happy to meet all the fans here in Korea through the relay concert and the meaningful charity album.”

Check out the touching music video of Standing Together here:

This music video is based on a true story which happened in March 11, 2011 in Miyagi, Japan and the people in the video are those who actually experienced the natural disaster and shared the pain and despair which they felt at that moment.

Pure family dedicates this song to the true heroine of this music video, Sato Yumeko. May She rest in peace.