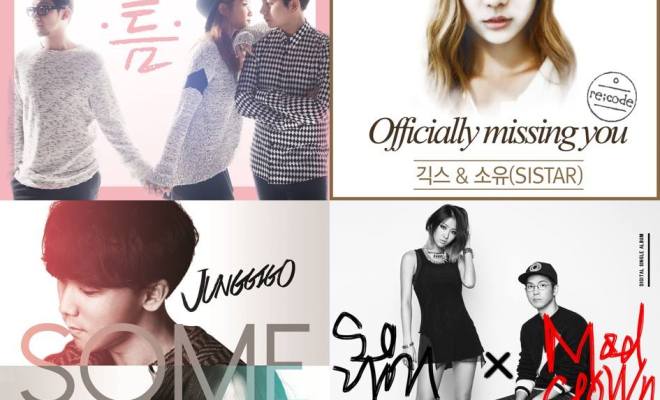 The Many Collaborations of SISTAR’s SoYou

While most fans see her as a beautiful member of SISTAR, it’s no secret that the 22 year old SoYou is the goddess of collaborations. Her magical journey as a collaborator all started back in 2012. Let’s travel back in time to where her successful career took off.

Officially Missing You, Too is a remake of Tamia‘s Officially Missing You. The special cover was made for Loen Entertainment‘s ‘Re;code‘ indie cover project. The soft vocals of SoYou and Geeks in perfect harmony, made the song perfect to listen to when missing someone. To top it off, Haha and Block B‘s Zico also made a special appearance in the music video. The track instantly became a hit at the music charts.

SoYou and Mad Clown‘s Stupid in Love is one of the most popular tracks in 2013. The seductive vocals of SoYou along with the intense rap by Mad Clown give fans an emotional perspective on a complicated love. The track instantly topped the charts upon its release, ranking number 1 on all 9 major music charts.

SoYou and JunggiGo‘s Some is the most well-known track from all of  SoYou’s collaborations, and took South Korea by storm. The interesting lyrics, along with the soothing beat, win the hearts of many Koreans. The track was an instant hit, and it stayed on the music charts for numerous weeks. Aside from the addictive song, the cute music video starring B1A4‘s Baro and SISTAR‘s Dasom was also popular among the public.

The newest collaboration by SoYou is also a huge success. The heart fluttering lyrics about love is as captivating as SoYou’s previous tracks about love. Like all her other collaborations, The Space Between featuring Urban Zakapa also received an all-kill upon its release. The adorable music video starring My Love from the Stars‘ Ahn Jae Hyun and The Moon Embracing the Sun‘s Nam Bo Ra will make you fall in love with the song even more.

Vote below for your favorite SoYou collaboration!