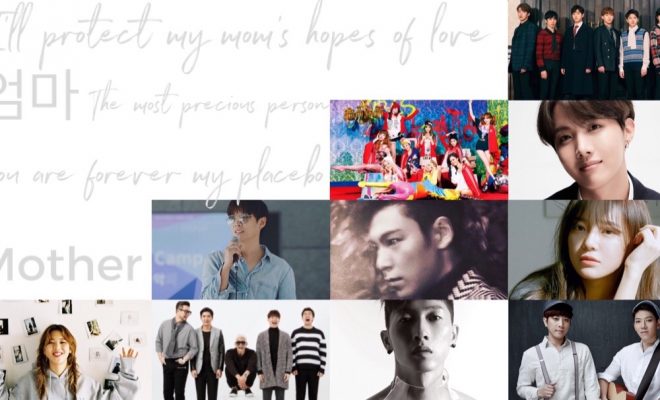 Celebrate Mother’s Day with these amazing K-pop songs that honour mothers in the most sincere and sweet way!

Music has always been a powerful medium for artists to convey their feelings and show appreciation through their creations.

Over the years, popular artists have chosen music to show their gratitude and love to their moms and everything that mothers do selflessly for their kids.

Here are 10 of the most remarkable songs you can listen this Mother’s Day popularized by some of your favorite Korean music artists.

The song is one that is sure to give you chills when you hear it as soon as it begins. Soft piano and powerful vocals of the members almost move you to tears with each and every line.

The lyrics really hit home with lines such as:

‘Song for you, I want to give it to you, who has suffered. Though I missed you, though I wanted tohear from you, just as always, I’m late again…’

“Mama (엄마)” is so sincere in its approach that it moves you and makes you feel happy, sad and grateful all at once! The song is an appreciation of a mother’s unconditional love that is often taken for granted.

“Dear Mom” maintains a nostalgic feel with it’s synth and piano based arrangement. The group mesmerizes with their vocals and high notes.

The track is extremely touching as it talks about how a mother endlessly supports her child’s dreams and silently watches over her child despite them hurting her with wrong choices.

The lyrics cherish a mother’s love in a very genuine way as the girls make promises to their mothers that they will make their mothers proud as they declare their love for them.

Saxophones, synths and J-Hope’s smooth raps are what give this track its suave vibe.

J-Hope takes a trip down memory lane as he looks back to where his journey began – in the year 2006.

He expresses how his mom supported the pieces of his dream despite his dad’s disapproval. J-hope talks how he is indebted to his mom for being there and working hard so that she could back up his passion.

J-Hope celebrates his mom on this track as he thanks her for everything she’s done for him and that, he is what he is today because of her.

In the song, he asserts that because of her sacrifices he has become the star he is and now asks her to trust him and lean on him – ‘You were like a fertiliser to a budding plant, Now I’m a flower, I’ll be your flower path, you walking on way..’

This track will touch your heart in the most indescribable way! Ra.D’s vocals are ever so evocative throughout the song but more so when he utters the single word ‘엄마,’ which is so stirring that all you can think at the moment is about your mom.

He sings with such incredible emotion that you can’t help but feel emotional and maybe even shed a tear or two.

Definitely one of the most beautiful tracks that reveres a mother’s pure love in an awe-inspiring way.

“Oh Mom” is a rock ballad that explores a self reflective story of struggling with the demons within.

In the lyrics, T.O.P calls out and tells his mother that he knows he needs to change and expresses his apologies for the same as he seeks her advice.

The song has heavy drums and guitar riffs that add that power to the overall meaning of the song.

While it may not be a conventional song about mothers, it stands out for its honesty. It shows that when things get rough and in the times of desperation the only person who one would seek out for is their mother.

Zico produced “Flower Way” based on a letter written by Sejeong to her mother. The lyrics are an illustration of Sejeong’s appreciation for her mother.

‘Oh rewind, the more I think back, the more I’m sorry. So I won’t give up. You gave up your youthful and beautiful season. Look at me, I have bloomed prettily. Even if I fall to the ground, I will make you walk only on flower paths.’

The song is cinematic in its composition to evoke that feeling of nostalgia while Sejeong’s sultry vocals really shine through on this track!

“To.Mom” is very different in its approach; the composition is straight up RnB/Hip-Hop. Kisum’s fresh rap and In Soon Hi’s unique, husky vocals really give this track a very dynamic energy.

The track celebrates mothers in an original and special way!

The song is true to its time of release and has a very 90s vibe that is evident in its composition.

The song is an ode to a mother’s love that would overcome obstacles to make her child happy.

The lyrics talk about how despite the mother doing everything for her child, she gets taken for granted. It is only when it’s too late that the artist realized that he loved his mother, but regrets that he never told her as he tearfully bids her goodbye.

The track really gives you a lot of think about and makes you want to appreciate all that you have, more so than ever.

“Red Sun” tells a story of regret wherein the artist talks about how he did everything his mother told him not to do, disobeyed her and constantly made her worry.

He expresses remorse for his actions as he profusely apologises in the lyrics. Jang Woo Hyuk asserts that he understands now how wrong he was as he declares his love for his mother.

‘Now I understand my mother’s sadness and tears. Now I see my mother’s gray hairs and wrinkles. Everything was my fault, so I’m full of guilt.My mother blames herself as the years go by,She is part of my dances, Because she is always in my heart. The most beautiful woman in this world. That person is my mother.’

This soft ballad is one that will make you feel extremely lachrymose.

“Mother” is a tearful track that tells the story of a person who realizes the true value of his mother only after she is gone.

Even though the track is sad, it really leaves you with a valuable lesson of cherishing your mothers because they’re truly special and that there is no love that can compare to the love of a mother.