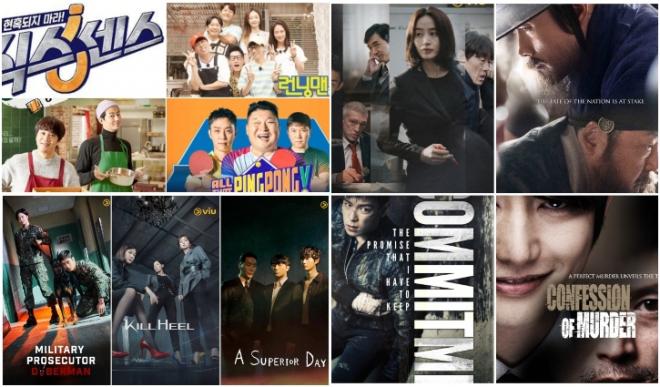 From K-Dramas, K-Shows and K-Movies – Viu has you covered this month!

Make sure to update your watch list to new offerings available on Viu this March.

The stories of Korea’s head of monetary policy, a factory owner and a financial analyst embody the people who tried to prevent the crisis, take advantage of it, and are left protecting their livelihoods in the wake of national bankruptcy. The Fortress is directed by Hwang Dong Hyuk, the man behind Squid Game. It is set during the Second Manchu invasion of Korea in 1636, when King Injo and his retainers seek refuge in the fortress located in Namhansanseong. Catch Bigbang’s T.O.P in one of his last shows before his hiatus in Commitment.

He stars as a 19-year-old North Korean Li Myunghoon, who takes on a hitman mission in South Korea to free his sister (portrayed by Kim Yoo Jung) from the labor camp. However, he becomes a target of his own government. Police officer Choi Hyeong-goo (Jung Jae Young) is haunted by his failure to arrest a serial killer 15 years ago and becomes an alcoholic.

On the day its statute of limitations expires, a novelist publishes the book I Am the Murderer, claiming responsibility for the atrocities.

The novelist (played by Park Shi Hoo) rises to instant fame due to his good looks and shocking
claims, as the victims’ families, authorities and Hyeong-goo scramble to find out the truth.

A popular thriller that spawned multiple remakes, Confession of Murder is definitely a must-watch. Relive the best moment of the popular series Running Man of all time, with a curated selection of classic episodes, coming to you soon on Viu! One of the three is entirely fabricated from scratch by the production team. Everyone must work together and use their sixth sense to figure out which is fake. Heartthrob Ahn Bo Hyun stars as Do Bae-man, an indifferent prosecutor who only takes on the job to make more money, and looks forward to the day when he can take off his military uniform.

On the other hand, Cha Woo-in (Jo Bo Ah) is the only daughter of a chaebol family who chooses to become a military prosecutor to seek revenge.

In this latest K-drama about the fierce and competitive world of home shopping, TV and movie veteran Kim Ha-neul stars as Woo-hyun, an exceedingly average and mundane home shopping host.

Her stagnant working career causes her anxiety, especially when compared with the popular Bae Ok-sun (Kim Sung-ryung), the highest paid celebrity host in the field of home shopping.

Top-billed by Jin Goo, Ha Do Kwon, Lee Won Geun; A Superior Day is based on a webtoon.

It is a thriller drama set in 24 hours where only the superior survives. Ho-chul (Jin Goo) has to save his kidnapped daughter by killing ‘Rich Girl Killer’, a notorious serial killer who only targets wealthy women.

As the suspenseful events unfold before him, Ho-chul does all he can do to find his daughter.

Don’t miss these exciting new shows on Viu this month!