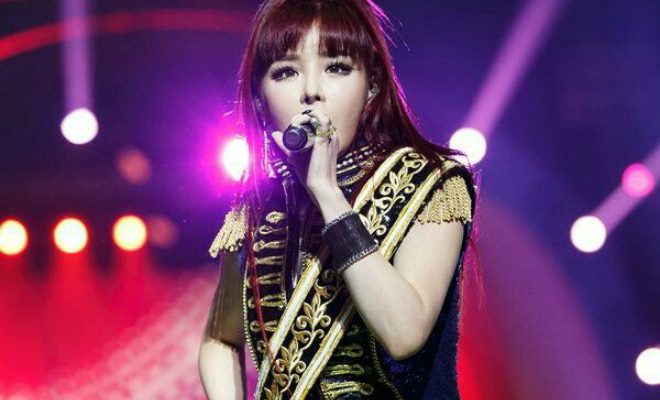 The 33-year-old singer flaunted her summer-ready body that has garnered over 4,000 retweets and 9,000 shares. Many of her followers left positive comments on the photo, saying that she is “cute” and “beautiful”. Some even compared the singer to American rapper Nicki Minaj.

But it was not only her attractive photo that got fans all hyped up. Park’s caption to the photo “I’m going back soon” are making Blackjacks curious and excited for what she might be up to.

Park then replied that the fan should ask her producer YG and Teddy oppa. Her reply also elicited question on her contract status with the entertainment agency. There has been no official statement issued on the status of her contract with YG Entertainment since the group’s disbandment in 2016. 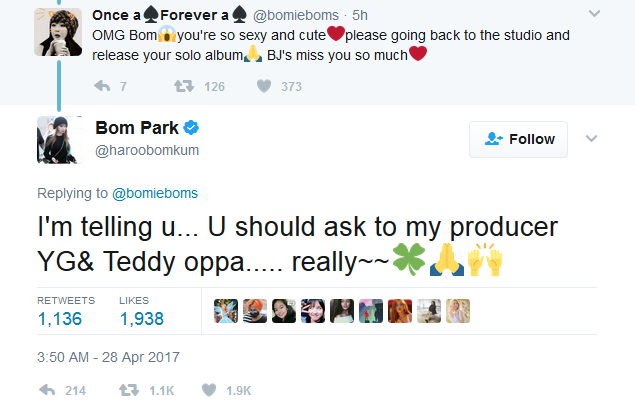 A screenshot of Bom’s reply to a fan’s question regarding her solo album.

The singer last performed on stage at the 2015 Mnet Asian Music Awards (MAMA) with CL, Sandara Park and Minzy. The performance also marked the final stage of the quartet as a group.

She then participated in 2NE1’s final song Goodbye with CL and Sandara Park. The song was released in January 2017.

Park Bom has been missing in the limelight since her involvement in a drug scandal. The scandal prompted her to cease domestic activities and take an indefinite hiatus from the industry.

Watch 2Ne1’s 2015 MAMA performance below while waiting for her return.

Hellokpop, as an independent Korean entertainment news website (without influence from any agency or corporation), we need your support! If you have enjoyed our work, consider to support us with a one-time or recurring donation from as low as US$5 to keep our site going! Donate securely below via Stripe, Paypal, Apple Pay or Google Wallet.
415
SHARES
FacebookTwitter
SubscribeGoogleWhatsappPinterestDiggRedditStumbleuponVkWeiboPocketTumblrMailMeneameOdnoklassniki
Related Items2NE1BomCLMinzyPark BomSandara ParkTeddyYG Entertainment
← Previous Story Song Hye Kyo And Gong Yoo Awarded Best Actors By US Video Streaming Website
Next Story → IU Reveals What She Collects But Asks Fans Not To Give Her: “I Enjoy Collecting Them By Myself”