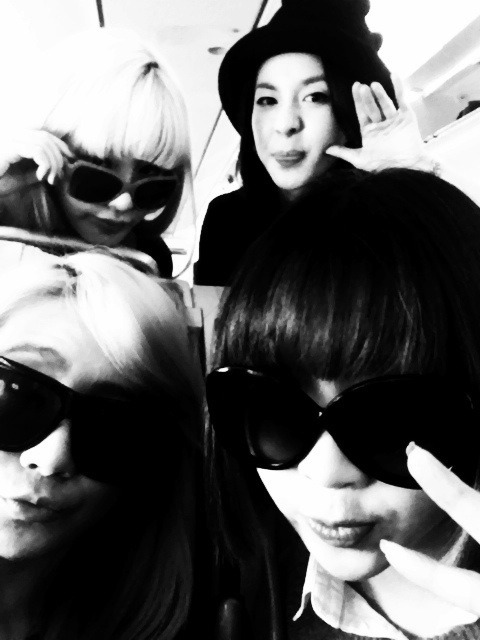 [The following is a direct translation of the article as it appeared on Nate via OSEN.]

Group 2NE1 has uploaded a picture that shows the group’s unique characteristics. Dara, from 2NE1, uploaded the picture on her m2day (a Korean social network service that is similar to twitter) saying:

“2NE1 in Okinawa! It was our first trip to Okinawa ~~ We enjoyed the stage so much~!!! The amazing responses from the audience!!! Okinawa sugoidesune~!!! ^.^ 2012 K-POP collection in Okinawa, nice effort everyone~!!!! Yea~!!! (picture originally from CL)”

On the 18th, the group participated in the ‘K Collection in Okinawa‘ and met with its Japanese fans.

In the picture, Dara wore a hat that makes an image of a witch and showed off her baby face wearing a cute facial expression. Likewise, Bom, CL, and Minzy showed off their small faces each wearing a pair of big sunglasses. As the youngest, Minzy made a ‘V’ with her fingers. Netizens who encountered this post said:

2NE1 will be performing at the ‘GS & CONCERT‘ on the 21st in Seoul Jamsil Indoor Gymnasium.

Hellokpop, as an independent Korean entertainment news website (without influence from any agency or corporation), we need your support! If you have enjoyed our work, consider to support us with a one-time or recurring donation from as low as US$5 to keep our site going! Donate securely below via Stripe, Paypal, Apple Pay or Google Wallet.
FacebookTwitter
SubscribeGoogleWhatsappPinterestDiggRedditStumbleuponVkWeiboPocketTumblrMailMeneameOdnoklassniki
Related Items2NE1BomCLDaraK collection in Okinawame2dayMinzyOkinawapicturesunglasses
← Previous Story PSY and Seungri say ‘Don’t Hate Me’
Next Story → Miss A’s Suzy shows her bare face on Twitter