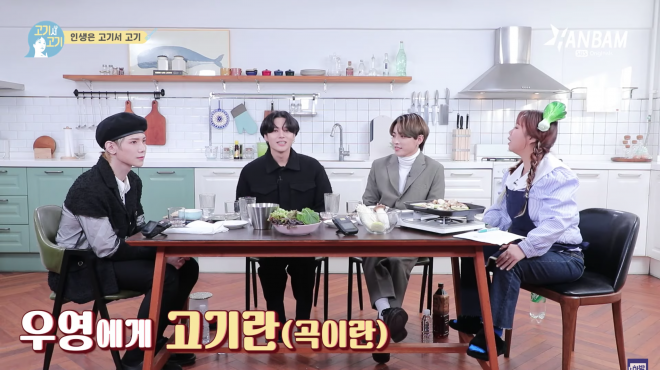 ATEEZ divulge details about the warm friendships among their group and their dedication to music as the first guests of the new SBS Hanbam series Meat Up!

ATEEZ featured as guests for SBS Hanbam’s premiere of its new broadcast series, Meat Up, hosted by Hong Hyunhee. Specifically, members Hongjoong, Yeosang and Wooyoung joined Hyunhee for a warm interview discussing touching topics such as their team dynamics, as well as their commitment to music. 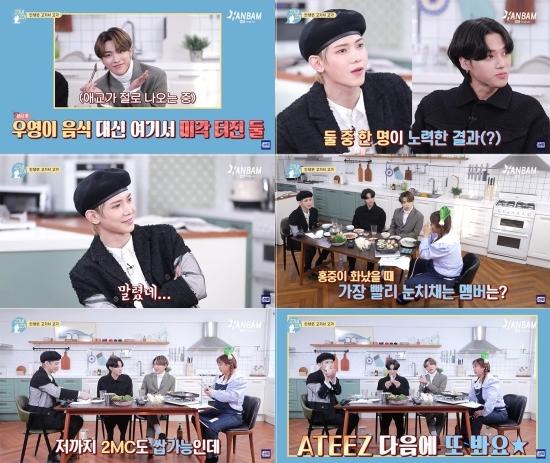 “Meat Up” is SBS’ newest midnight web broadcasting. The entertainment show highlights Hong Hyunhee as its host, interviewing various idols while conducting a meat-eating show for viewers. Through this combination, fans can enjoy an intimate and comfortable atmosphere of the interview.

As a leading K-pop group and emerging trend in the industry, ATEEZ members were invited as the series’ first guests. Alongside Hyunhee, who cooked earnestly, the members displayed an enthusiastic Korean beef mukbang for viewers. During the interview, ATEEZ displayed their entertainment show skills through various playful segments. This included acrostic poems and individual dance segments.

However, the members provided endearingly honest and refreshing takes on their idol lives. With sincere words, ATEEZ divulged in behind-the-scenes stories that many fans would find interesting.

Known as long-time friends since their trainee days, Yeosang shared a heartwarming and equally hilarious, tale about Wooyoung. He explained that despite their differences, as Yeosang is quieter while Wooyoung is more extroverted, their friendship rapidly progressed due to Wooyoung’s outgoing nature and their push-and-pull dynamic.

Meanwhile, Hongjoong accredited ATEEZ’s closeness to Wooyoung’s sociable and easygoing nature that helped bond the group together. Additionally, he mentioned Yunho as the first member to notice when he is upset.

When speaking about the group’s closeness, their leader explained that the team’s dynamic is continually shifting since they are all close to one another. Hongjoong joked about their jealousy when witnessing each other’s closeness. However, their affinity to certain members rotates, and perhaps this is the charm about their team as fans can clearly see how close-knit ATEEZ are in general. 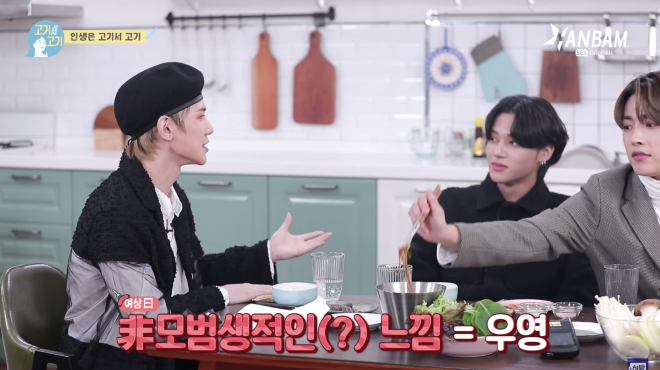 Commitment to engaging performances and rich music continues to be evident in ATEEZ’s career. During a segment explaining what music means to them, Hongjoong confirmed that the group remains wholeheartedly dedicated to their craft. He also noted that the fans appreciated this devotion. As such, he promised that the team continue to work hard to produce new songs and comeback with a freshly prepared album.

Meanwhile, Wooyoung expressed music is a need. He elaborated by explaining that life without music creates loneliness and boredom.

Yeosang added that music brought ATEEZ together, and as such, it is the basis for his life.