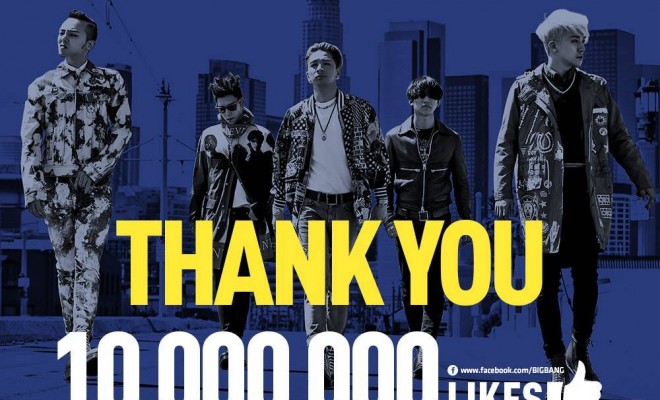 BIGBANG Hits Milestone On Facebook + Gets In Year End Review

BIGBANG, who celebrated their ninth year together in 2015, hit several milestones during the course of the year. G-Dragon has hit 7 million followers on Instagram, the band slayed on MelOn Music Awards and the MAMAs. They also ruled music charts for weeks without much interruption during their MADE promotions.

Towards the end of a significant year in their career, BIGBANG has hit another milestone on social media. It’s a whopping 10 million likes on their Facebook page! Among Korean celebrities, only PSY and actor Lee Minho have more followers on the same platform. The former boasts 12 million likes, with the latter 16 million likes.

Plus, they have been included – albeit very briefly – in Facebook’s 2015 Year End Review video. Check it out below around the 1 minute mark.

Hellokpop, as an independent Korean entertainment news website (without influence from any agency or corporation), we need your support! If you have enjoyed our work, consider to support us with a one-time or recurring donation from as low as US$5 to keep our site going! Donate securely below via Stripe, Paypal, Apple Pay or Google Wallet.
68
SHARES
FacebookTwitter
SubscribeGoogleWhatsappPinterestDiggRedditStumbleuponVkWeiboPocketTumblrMailMeneameOdnoklassniki
Related ItemsBigbangFacebookG-dragonLee MinhomilestonePsy
← Previous Story Producer Of EXO’s ‘Unfair’ Shares Photo With Chanyeol
Next Story → Topp Dogg Unveils Hilarious Drama MVs For ‘O.A.S.I.S’ & ‘Runaway’