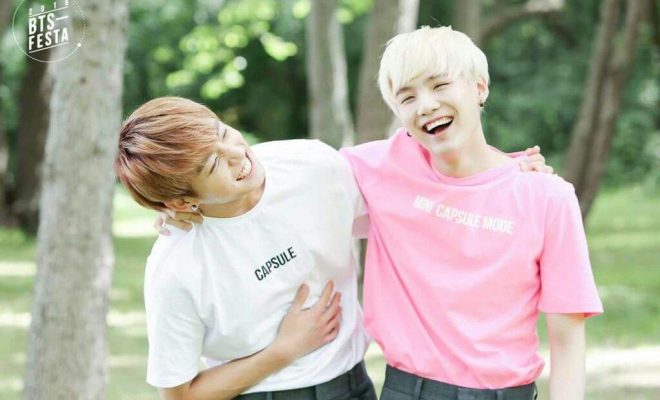 What can the golden maknae of BTS not-do?

BTS‘s Suga marks another year as he celebrates his 24th birthday on March 9. Fans expressed their congratulations and well wishes to the idol by trending #HappySugaDay on social networking site Twitter.

However, ARMYs are not the only one commemorating Suga’s birthday. A congratulatory message accompanied by a photo of Suga with scribbled messages from his members was uploaded on the group’s Twitter account.

BTS also continued with its tradition of posting photos of each other on one’s birthday. First member to send his greeting was member J-Hope, who spammed the group’s BTS_twt Twitter with a timeline of photos of him and Suga beginning 2011.

Members Jimin and V, on the one hand, showed Suga’s alter ego “Yoonji” from ‘Run BTS!’ with some love in birthday messages for their hyung. Eldest member Jin greeted his roommate with a simple “Happy Birthday”, and a photo of Suga with J-Hope eating. Leader Rap Monster took time to unearth pictures of Suga for his birthday greeting.

However, taking birthday greetings a notch higher, youngest member Jungkook posted a special video to celebrate his hyung‘s birthday. The video contained the maknae‘s messages and videos of Suga, including the latter’s audition video. Jungkook expressed his love and admiration for Suga who, according to him “happens to be like sugar”, in the 77-second long video.

He also joked that despite Suga’s teasing of Jimin’s height, the birthday boy seemed to be competing with Jimin as the shortest in the bunch. He then told Suga to buy him a meal if he happens to see the video he prepared.

Jungkook relayed his sincere message to Suga, complementing him on his cool performances. “Please continue to run for Bangtan and ARMYs,” he wrote. He also advised his hyung to exercise his lower part and take vitamins. “When I see your thin legs on stage, I literally teared up,” he wrote.

The “golden” maknae of BTS also sent his thanks for the support he received for his song cover of Charlie Puth‘s We Don’t Talk Anymore, which he was also known as Jungcook by the American singer. He ended the video with an “I love you” and “Until now, Nochu.”

The video greeting, which has received almost 120,000 retweets and over 211,000 favorites since its posting, has left ARMYs impressed by Jungkook’s seemingly unending capabilities.

“Saved 2017,” a fan wrote on the video greeting. Another wrote that “it’s the cutest thing” and how fansite and fandom editors are probably “shaking”. “What can’t he do?” she added.  Others also posted how impressed they were of Jungkook’s video greeting for Suga.

jungkook jst blew every other bday tweet out of the water. other bts members u can go home. all the vine editors go home. we're done here

One fan also called Jungkook “the real Mr. Worldwide” for using various languages to greet Suga in his video. Many commented on how cute and adorable the maknae was for making such efforts for Suga. They also expressed how touched they were for Jungkook’s words of admiration and respect for his hyung.

329
SHARES
FacebookTwitter
SubscribeGoogleWhatsappPinterestDiggRedditStumbleuponVkWeiboPocketTumblrMailMeneameOdnoklassniki
Related Items#HappySugaDayBTSj-hopeJiminjinjungkookrap monstersugaV
← Previous Story Highlight’s Kikwang And Dongwoon On Leaving Cube: “Let Other Singers Know That They Have A Choice Like We Did”
Next Story → Vietnamese Girl Unexpectedly Gets Posted On Korean Social Networking Site ‘Ulzzang’