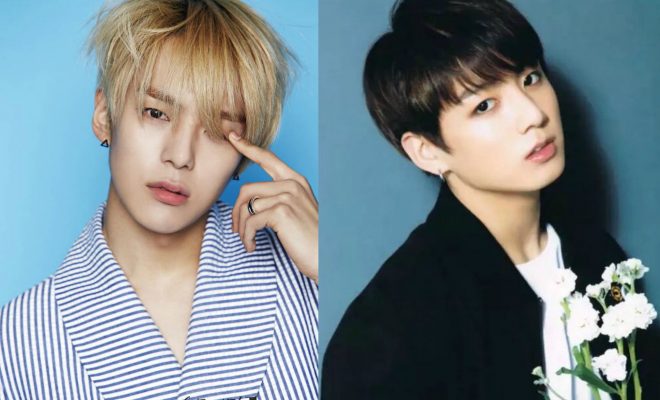 #ISAC2017 is all about interactions.

Korean boy group SEVENTEEN added a new face to its thirteen-member line up during the recording of the ‘Idol Star Athletics Competition (ISAC)’.

Joining the SVT squad is none other than the youngest member of BTS, Jungkook, and MONSTA X‘s Minhyuk. Fans have gushed at the cute interactions between the two idols and the members of SEVENTEEN.

The maknae of BTS and vocalist of MONSTA X seemed to have comfortably found their spots among the members of SVT. Fans have even named them as the 14th member of SEVENTEEN, and created a meme.

A fan wrote, “BTS just lost a member to SEVENTEEN”, accompanied by Jungkook’s photo with the members of the idol group.

Some fans even poked fun at both group members’ supportive gestures towards SVT during the aerobics competition.

In the video, Jungkook and Minhyuk were energetically cheering along with the rest of the idol groups as the other members don their routine.

may we always be as supportive of seventeen as jeon jungkook and lee minhyuk are pic.twitter.com/Ie5EpwCbS5

Jungkook was also spotted, seemingly ignoring Jin who tried to grab his hand. But the maknae casually went on to head over to SEVENTEEN.

Minhyuk, on the other hand, was comfortably leaning onto Jeonghan, and holding the SEVENTEEN member’s hand in a set of photos.