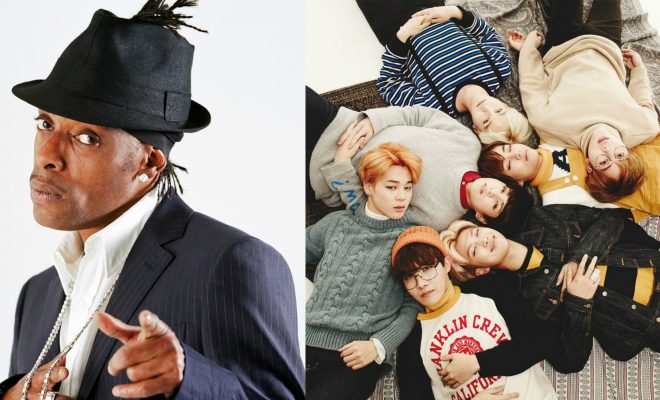 Korean boy group BTS might be expanding its network in Hollywood after receiving love calls from the likes of Charlie Puth and Kehlani. However, the boys might also be rekindling some old flames.

American rapper Coolio, who mentored the septet during ‘American Hustle Life’, recently wished them good luck via his Twitter account. The Grammy award-winning rapper replied to Billboard’s post of the group on the same social networking site.

Fans of the Korean group, noticed the tweet, and expressed their sentiments on Twitter. Some fans relayed their desire to see another season of ‘American Hustle Life’.

“Reunions are good,” one said. A fan tweeted a GIF of member V‘s interaction with Coolio during ‘American Hustle Life’. In the GIF, V greeted the rapper with “Turn up”.

However, it seems that ARMYs are not really pleased with the rapper’s interaction on the boy group. ARMYs looked back at Coolio’s treatment towards V during the show, and used videos and photos to express their feelings to his tweet.

A fan posted a snippet of the American rapper’s reaction on the BTS member’s performance in one episode of the show. In the video, Coolio is seen turning his back on V. He was also heard saying, “Let me know when he leaves.”

One fan was vocal in expressing her opinion towards the tweet. According to her, although some fans may be happy of Coolio’s tweet, she, on the one hand, was shaking her head because of the rapper’s maltreatment towards V. Another echoed the sentiment, saying Coolio has better stayed away from BTS.

some of u are very excited bc coolio tweeted them but I still remember how he treated tae on ahl & it's a no from me, I don't forget easily

Coolio bettah stay away from bts im still salty over how he treated Tae in hustle life pic.twitter.com/6O1iu2FRK6

“Coolio can keep his half-assed ‘good luck guys’ to BTS,” a tweet read, accompanied by a clip of Coolio’s reaction to V’s performance. Another wrote that he might have seen that the group is doing well recently, and thus the tweet.

Coolio can keep his half assed "good luck guys" to bts I'm still triggered by this he can choke. pic.twitter.com/GrtyLZ3phY

coolio saw how successful bts has become and thought 'wait .. lemme get back on that' pic.twitter.com/hgavwDvtVX

Back in 2014, BTS flew to Los Angeles to film its own reality show under Mnet, entitled ‘American Hustle Life’. The show aimed to expand the septet’s knowledge on hip-hop. Renowned hip-hop artists such as Tony Jones, Warren G, and Coolio mentored the septet throughout the show.