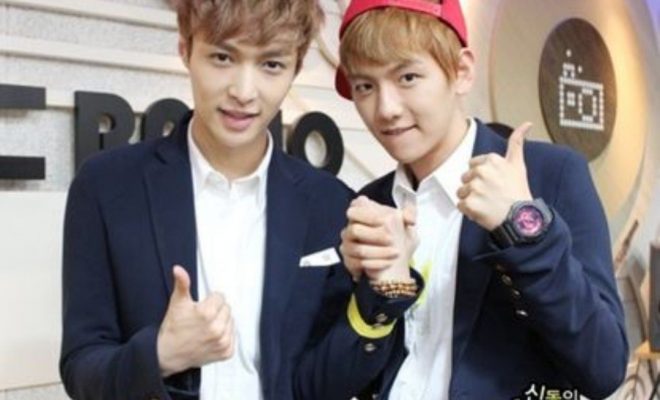 #TwitterWelcomesLay: EXO’s Baekhyun And Lay Are Now Mutuals On Twitter!

The singer-songwriter joined the Twitterverse on June 5, but started using the platform on June 7, with a tweet expressing his joy to work with rapper-songwriter MC Jin. He also shared his hope that his followers will like MC Jin’s “Debut”, which he produced and arranged.

But Lay’s follower count did not immediately shoot up as fans did not think the account was real.

It was only on July 12 that EXO-L took notice of the account after Baekhyun, through his account @B_hundred_Hyun, followed @LAY_zhang_. Since then, the latter’s follower count has reached almost 400,000 (as of press time).

Moreover, Lay is only the Twitter user who Baekhyun follows on the social networking site. And Lay returned the brotherly gesture by having his fellow EXO member as one of the two users who he has followed.

A fan noted this sweet connection by writing that when Baekhyun joined Weibo, Lay was his first follower.

Yixing created tw account and Baekhyun only follows him

Others also went soft by the two being mutuals, noting that both did not follow any of the official accounts of SM and EXO.

Baekhyun is not following SM, EXO and his manager's Twitter accounts but follows Yixing immediately. I AM NOT CRYING I SWEAR. pic.twitter.com/mAimRzbPCR

Aeris also warmly welcomed the singer-songwriter through the hashtag #TwitterWelcomesLay and #WelcomeToTwitterLay, along with sweet messages, as well as, funny tweets.

Welcome to Twitter Yixing ??
What a nice way to start my day, we love you China King ?#TwitterWelcomesLay pic.twitter.com/Ts1BbNG6Db

We have 2 memes now. Thanks to Zhang Yixing. #TwitterWelcomesLay pic.twitter.com/4N2xJ7keQV

/tweeted suho meme/
exols: what the i forgot suho is watching
/deletes tweet/