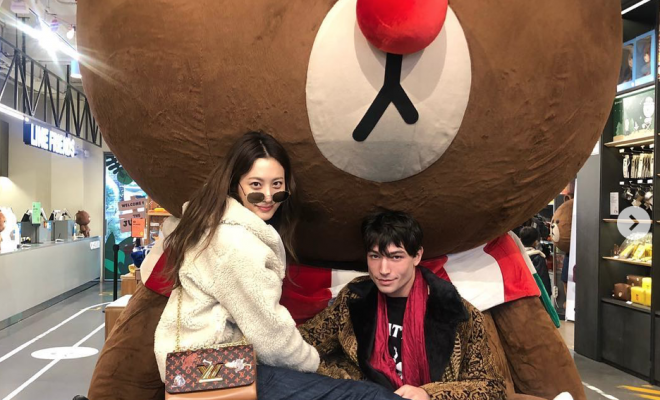 Ezra Miller and Claudia Kim from the film Fantastic Beasts: The Crimes of Grindelwald, happily wandered in the streets of seoul.

On November 26, Korean Actress Claudia Kim shared on her Instagram account, photos of her and her co-star Ezra Miller.

Kim and Miller played the role of Nagini and Credence in J.K Rowling’s book franchise turned into movie, Fantastic Beasts: The Crimes of Grindelwald.

In the story, the two characters have a special friendship and that friendship extended even in real life.

It seems that the two has a charming chemistry based on the multiple photos Kim shared on her social media account.

Claudia Miller who is Kim Soo Hyun in real life is a model turned actress. She made a name in the entertainment industry when she won a modeling contest in 2005.

She then landed her supporting roles in the Korean dramas, Brain and 7th Grade Civil Servant while her first leading role was in the sitcom, Standby.

After which, she gained international recognition in her role as Princess Khutulun in the American historical Drama, Marco Polo and Helen Cho in Avengers: Age of Ultron.

Meanwhile Ezra Miller is an American actor and singer who is known in movies such as Afterschool and The Perks Of Being A Wallflower.

Wouldn’t it be nice to see them on the streets of Seoul while on vacation?

Hellokpop, as an independent Korean entertainment news website (without influence from any agency or corporation), we need your support! If you have enjoyed our work, consider to support us with a one-time or recurring donation from as low as US$5 to keep our site going! Donate securely below via Stripe, Paypal, Apple Pay or Google Wallet.
FacebookTwitter
SubscribeGoogleWhatsappPinterestDiggRedditStumbleuponVkWeiboPocketTumblrMailMeneameOdnoklassniki
Related ItemsClaudia KimEzra MillerFantastic Beasts: The Crimes of Grindelwald
← Previous Story TWICE Gears Up For Special December Album
Next Story → SHINee’s Key Wants To Prove Himself Through His First Solo Album
COVID-19 ALERT