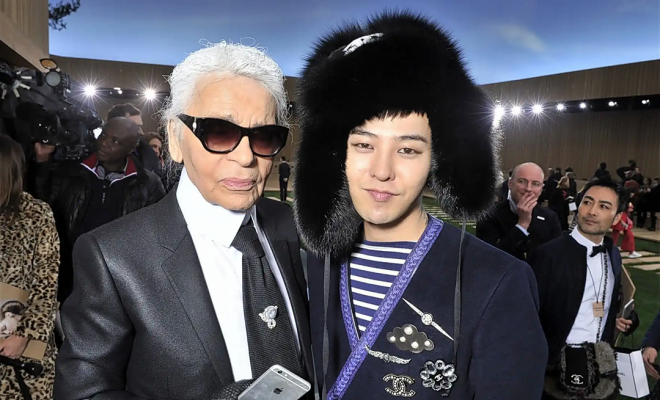 G-Dragon took to Instagram to send condolences to his good friend and fashion icon Karl Lagerfeld.

BIGBANG’s G-Dragon ended his almost one-year hiatus on Instagram with a tribute to Chanel’s creative director and fashion icon Karl Lagerfeld, who passed away on February 20 at the age of 85.

The singer-songwriter posted a series of photos on the photo and video sharing site along with the caption, “Star is born and gone. RIP 🌙.”

Star is born and gone. RIP🌙

The BIGBANG member developed a close relationship with Lagerfeld through the years.

He received front row invitations to Chanel’s fashion shows and took the honor of being photographed by the renowned fashion designer for Vogue Korea’s 20th anniversary issue.

G-Dragon also received praises from Lagerfeld who considered him as one of the coolest musicians. He described the singer-songwriter’s fashion style as playful, but never girly.

Aside from G-Dragon, other K-Pop acts and Korean celebrities including CL, GOT7’s Jackson, and Song Hye Kyo joined the world in mourning and paying tribute to the fashion icon.

CL wrote on her Instagram: “Thank you for everything you’ve done. We love you, Karl.” She accompanied her message with a photo of them together.

GOT7’s Jackson recognized the unwavering influence of Lagerfeld in the world through his caption wherein he called the fashion icon”the legend to us”. He uploaded a photo which he took together, along with the said caption.

Song Hye Kyo, who shared photographs taken with Lagerfeld, wrote “Rest in Peace” in her caption.

+Thank you for everything you ve done we love you Karl+

Lagerfeld has led Chanel as its chief designer and creative director since 1983 until his death this year. He is largely credited for bringing the fashion brand to its status as a top luxury brand today.

We need your support! If you have enjoyed our work, consider to support us with a one-time or recurring donation from as low as $5 to keep our site going! Donate securely below via Stripe, Paypal, Apple Pay or Google Wallet.
FacebookTwitter
SubscribeGoogleWhatsappPinterestDiggRedditStumbleuponVkWeiboPocketTumblrMailMeneameOdnoklassniki
Related ItemsBigbangG-dragonKarl Lagerfeld
← Previous Story EXO’s Baekhyun Surpasses Two Million Followers On Twitter
Next Story → 31 Things We Learned About Treasure 13 Members In 31 Minutes