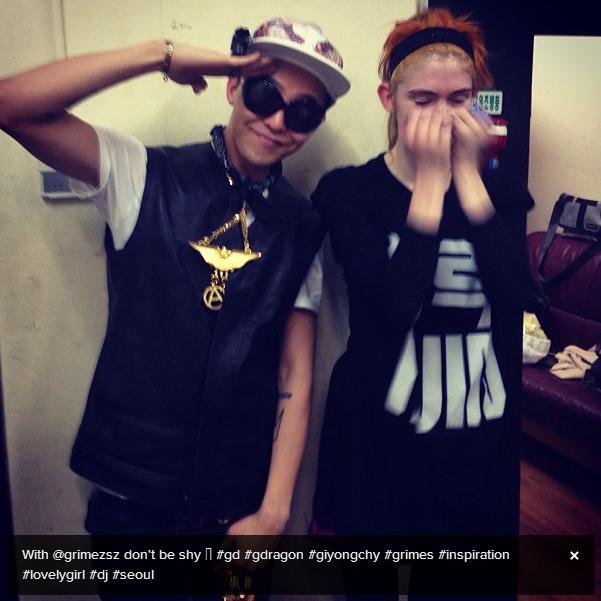 On March 23, G-Dragon shared that he met Canadian artist Claire Boucher, widely known as Grimes. He shared images of their meeting through Instagram and Twitter.

On G-Dragon’s Instagram photo, the artist is seen smiling innocently and saluting while leaning towards Grimes who hides behind her hands shyly. A small caption under the photo reads: “With @grimezsz don’t be shy.” G-Dragon also updated his Twitter; along with the tweet, he attached two images of them posing together.

Grimes also updated her Twitter by sharing that she had a pimple prior to meeting G-Dragon.

Hellokpop, as an independent Korean entertainment news website (without influence from any agency or corporation), we need your support! If you have enjoyed our work, consider to support us with a one-time or recurring donation from as low as US$5 to keep our site going! Donate securely below via Stripe, Paypal, Apple Pay or Google Wallet.
FacebookTwitter
SubscribeGoogleWhatsappPinterestDiggRedditStumbleuponVkWeiboPocketTumblrMailMeneameOdnoklassniki
Related ItemsG-dragonGrimesInstagramTwitter
← Previous Story Brian Joo asks fans, “What’s Poppin’?”
Next Story → Teen Top’s L.Joe joins Twitter