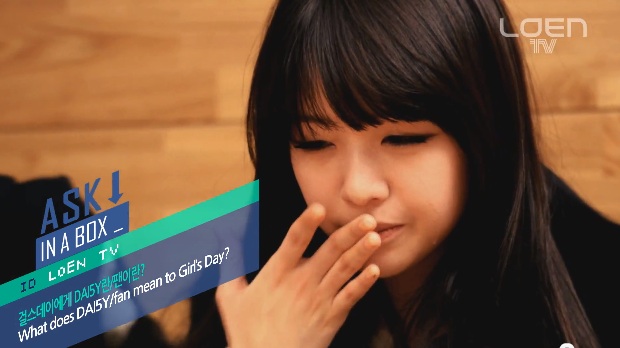 In an interview with ASK IN A BOX, Girls’ Day Min Ah broke down as she thanks fans for ongoing support.

‘We always get energy from you guys’ she said, when asked what the fans (DAI5Y) meant to her. Min Ah, who was one of the original five members of the group continue to promise fans a ‘great performance’.

The group which has undergone many member changes since their debut two years ago, completed an interview with the ASK IN A BOX interviews series. Fans from around the world submitted various questions to the group.

When asked about the comparison between Min Ah and Apink’s Eunji, the group acknowledged that Eunji was ‘really cute’ but said that their own Min Ah was ‘pretty and all that.’

Girls’ Day, who had only just released their comeback song Don’t Forget Me on October 26, also answered questions about the kissing scene of their music video and their ideal man.

Check the interview below.

We need your support! If you have enjoyed our work, consider to support us with a one-time or recurring donation from as low as US$5 to keep our site going! Donate securely below via Stripe, Paypal, Apple Pay or Google Wallet.
FacebookTwitter
SubscribeGoogleWhatsappPinterestDiggRedditStumbleuponVkWeiboPocketTumblrMailMeneameOdnoklassniki
Related ItemsAsk in a BoxDon't Forget MeGirl's Dayinterview
← Previous Story JYJ’s Junsu receives Best Musical Actor award
Next Story → Yoochun gets handy for baby knitwear