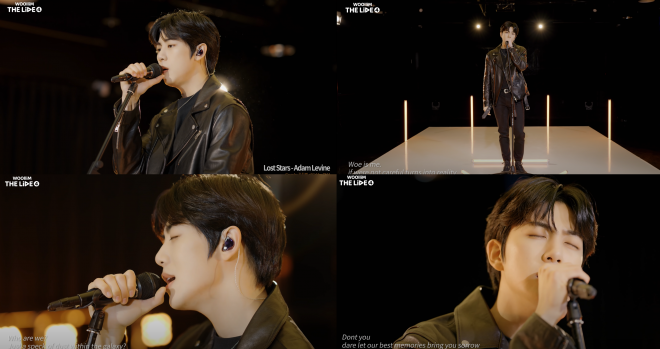 Jibeom made fans’ hearts swoon after taking his lovely voice to the stage of Woollim The Live 4.

Golden Child member Kim Jibeom captivated in his new cover for Woollim The Live 4. He sang to the tune of “Lost Stars”, a song from the soundtrack of the movie Begin Again.

Woollim Entertainment released the video of Jibeom covering Adam Levine’s track on July 29 at 8 PM KST. In the clip, the Golden Child member showed his outstanding visuals by wearing a black rider jacket, which matched well with his dark brown hairstyle.

The artist drew attention not only with his looks but with his incredible vocal control as well. He sang the song passionately, touching the hearts of viewers who could feel his flowing emotions.

The idol presented his more sentimental side through this impressive cover. His vocal stability and swift change between notes showed his talent and growth as a singer.

This flawless cover raised even more the expectations about the artist, as well as his group’s return with a new album. Golden Child will be coming back at the start of August with the full album GAME CHANGER, for which anticipation is already high and continues to soar further every day.

About Woollim The Live

Woollim The Live delivers high quality cover content created by artists under Woollim Entertainment. Due to its great success among global fans, it is currently running its fourth season, constantly adding surprises.

The performers have not only shown their individual charms through singing, but some have even added dancing to their repertoire. Others showcased synergy through duet stages, making the content more colorful to watch.

New videos are released every Thursday at 8 PM KST through the official YouTube channel and shared on social media platforms.