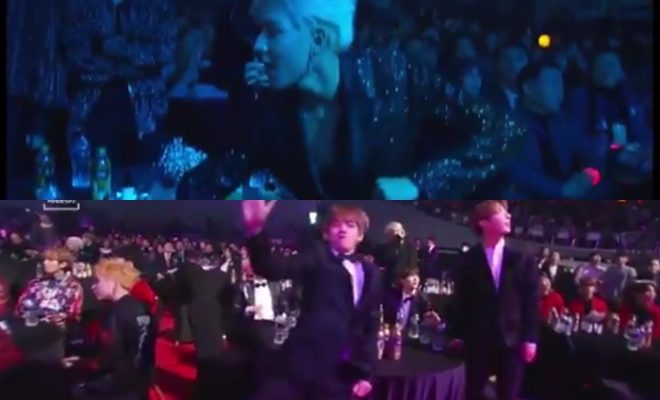 Bambam and V’s reactions are probably all of us when our favorite song comes on the radio.

The 26th Seoul Music Awards took place on January 19, with a star-studded line-up at the Seoul Jamsil Indoor Gymnasium.

Mnet Asian Music Awards 2016 had Wiz Khalifa, and Seoul Music Award had Silentó at their 26th show. The 19 years old American rapper previously collaborated with Punch for Spotlight. The 2016 release had won them the World Collaboration Award, and two artists came on stage to receive the award.

The pair also performed their collaborative track ahead of the announcement of the title. Of course Silentó would not just leave without performing his track Watch Me (Whip/Nae Nae) with its iconic dance move ‘whipping’.

While artists were performing on-stage, other artists would show signs of support and enjoyment by singing along, tapping the feet or making small body movements. But GOT7‘s Bambam and BTS‘s V were different, during Silentó’s performance of Watch Me (Whip/Nae Nae).

The two idols were spotted on camera, on their feet, dancing with full energy to the song. Like no one was there looking at them. Check them out: